What do Kobani airdrops mean for regional politics?

The United States is likely to use its new leverage on the PYD to goad it into opposing Assad. 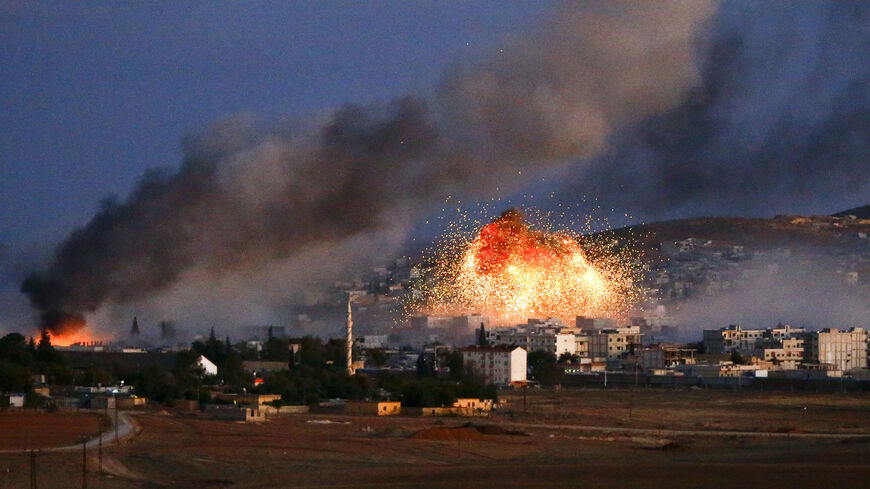 Smoke and flames rise over the Syrian town of Kobani after an airstrike, as seen from the Mursitpinar crossing on the Turkish-Syrian border in the southeastern town of Suruc, Oct. 20, 2014. The United States told Turkey that a US military airdrop of arms to Syrian Kurds battling the Islamic State in Kobani was a response to a crisis situation and did not represent a change in US policy. - REUTERS/Kai Pfaffenbach

On Oct. 19, the US Central Command (CENTCOM) announced that it had conducted multiple airdrops near the Syrian Kurdish town of Kobani, which has remained under siege by Islamic State (IS) fighters for more than a month. CENTCOM said US C-13 cargo planes had made multiple drops of arms, ammunition, and medical supplies provided by Kurdish authorities in Iraq. The move is set to have a profound effect on regional balances between Turkey, the Kurds and the United States that will likely reverberate in Tehran and in Damascus as well.

For several weeks now, the US and its allies have been bombing IS positions around Kobani. But the delivery of weapons takes the de facto alliance between the Syrian Kurds and the United States to a new level.

Turkey, which borders Kobani, is best positioned to help the Syrian Kurds. But the country’s ruling Justice and Development (AKP) party has spurned repeated Syrian Kurdish demands to allow weapons and fighters to cross through Turkey into the Syrian Kurdish enclave. On Oct. 18, Turkish President Recep Tayyip Erdogan said that the Syrian Kurdish Democratic Union Party (PYD), whose armed wing the People’s Protection Units (YPG) is battling IS in Kobani, were “the same as the PKK. “It’s a terrorist organization. It would be very, very wrong to expect us to openly say ‘yes’ to our NATO ally America to give this kind of [armed] support [to the PYD],” Erdogan declared.

Erdogan was referring to the PYD’s close links to the Kurdistan Workers Party (PKK), which has been fighting on and off for self-rule inside Turkey since 1984. The PKK is on the State Department’s list of terrorist organizations, and until last month successive US administrations refused to have any contact either with the PKK or the PYD. But the PKK and the YPG’s effectiveness against IS both in Iraq and Syria has triggered a paradigm shift in US strategic thinking. The US and the Syrian Kurds are now allies in the war against IS.

US Secretary of State John Kerry told reporters in Jakarta, Indonesia that while the Obama administration understood Turkey’s concerns, it would have been “irresponsible” and “morally difficult” not to support the Syrian Kurds in their fight against IS.

Kerry said IS had chosen to “make this a ground battle, attacking a small group of people there who, while they are an offshoot group of the folks that our friends the Turks oppose, they are valiantly fighting ISIL and we cannot take our eye off the prize here.” Kerry stressed, however, that it was “a momentary effort” and that the US had “made it very clear” to Turkey that it “is not a shift in the policy of the United States.”

Kerry’s words came hours after US President Barack Obama spoke over the telephone with Erdogan about Kobani. News emerged soon after that Turkey would be allowing Iraqi Kurdish peshmerga fighters to cross through Turkey into Kobani carrying fresh weapons for the YPG. How in the space of 48 hours did Turkey go from calling the PYD terrorists to opening an arms corridor for them?

As analysts ponder these dizzying changes, here a few immediate factors to consider: