Turks are fighting on both sides of the Islamic State-YPG battle for Kobani, but increasing numbers of Kurdish fighters, including women, are coming from Turkey to join the battle. 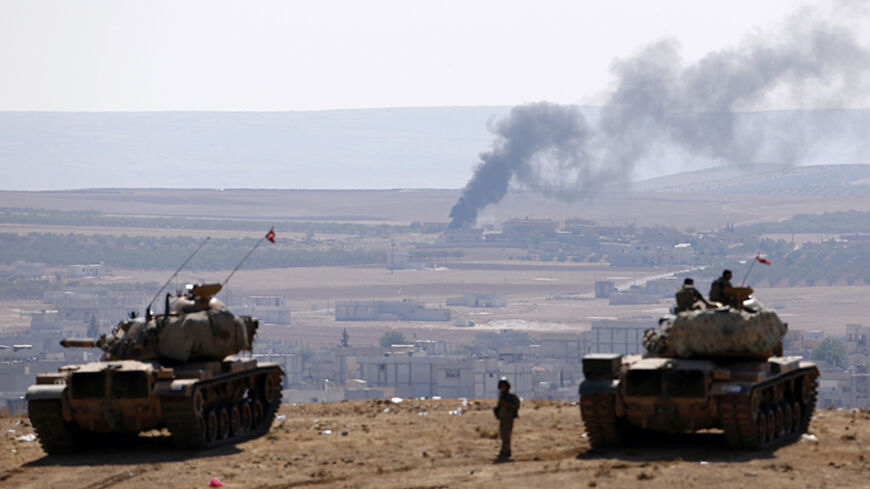 As smoke rises from the Syrian town of Kobani, Turkish army tanks take position on the Turkish side of the border, as seen from near the Mursitpinar border crossing on the Turkish-Syrian border in Sanliurfa province, Oct. 8, 2014. - REUTERS/Umit Bektas

While the Justice and Development Party (AKP) government still is listing preconditions for the Democratic Union Party (PYD) to meet in order for Turkey to help the Kurds in Kobani, the fight for that Syrian border city has turned into Turkey’s war. As the coffins of Turkish Kurdish youth who crossed over to Syria to join the People's Protection Units (YPG) in battles keep returning, the nature of the conflict appears to be changing. On Sept. 24, seven coffins of YPG fighters were brought to Turkey via the Habur border crossing. On Oct. 1, three more bodies, one of them a woman, were brought to Diyarbakir through the Mursitpinar crossing.

As coffins cross the border under the shadow of allegations that Turkey is using the Islamic State (IS) to terminate the autonomous Kurdish entity in what the Kurds term Rojava (western, or Syrian, Kurdistan), the sensitivity of the Kurdish public is becoming more acute, and with every funeral the rhetoric against the AKP gets more bitter. Certainly, the options of the Turkish government, squeezed between the Kurds and IS, are narrowing.

Those who don’t recognize borders

How is the mood on the other side of the border? I met YPG spokesman Redur Xelil in Qamishli, the most prominent town of Jazeera canton, in a building used as the Ministry of Defense on a street blocked off with concrete barriers. Xelil said the number of Kurds coming from the north he calls Bakur (Turkey) is increasing and that they have no animosity toward Turkey. He said, “The number of YPG fighters has reached 45,000; 35% of them are women. The percentage of PKK [Kurdistan Workers Party] fighters who have joined us is not more than 10%. They serve mostly in command and training functions. The number of those coming from Turkey is also increasing. Recently, 300 youth passed into Kobani. There are more now waiting to cross, but I don’t know their numbers.”

Turkish and Arab chauvinism won’t leave Rojava with its autonomy experiment, in particular Kobani, alone. Turkey, by demanding Kurds end their autonomy and join other opposition groups to fight Syrian President Bashar al-Assad's regime as a precondition to assist Kobani, appears to be on the same wavelength with IS. With its offensive, IS has dealt strong cards to the Turkish government in its quest to subjugate the Kurds.

Of course, IS has its own reasons to attack. Xelil listed those reasons to Al-Monitor: Kobani is the link between Afrin and Jazeera cantons. Kobani is between IS-controlled Cerablus and Tell Abyad. IS wants to link those two centers by capturing Kobani. Also there is a crossing to Turkey at Kobani that IS wants. These are the strategic reasons. There are also immaterial motives. Kobani was the first town to be liberated from the regime on July 19, 2012. Although IS is guided by radical Islamic ideology it is still an Arab chauvinist organization. Also, IS lost badly at Jazeera and wants to take revenge.

Kurds guarantee no attacks on Turkey from Rojava

When the talk came to allegations of Turkey’s aid to IS, Xelil took from his drawer the ID cards of Turkish citizens killed in IS ranks, a Turkish military ID card and foreign passports stamped at Turkish customs points. He said: “We are criticizing Turkey because we have expectations of it. We share a long border with Turkey. In Rojava, we look at Turkey as a friend, but we see that all terrorists come via Turkey. In the passports of foreign terrorists you have entry stamps from Ankara and Istanbul airports. Never mind supporting IS, we don’t want Turkey even to remain neutral. It must stand with us. We are not a part of the problems between Turkey and the PKK. That is an internal problem of Turkey. We guarantee that there will never be an attack on Turkey from Rojava. But Turkey is treating IS casualties at its hospitals. It is opening its gates to them under the guise of humanitarian assistance. We can’t even take our wounded to Turkey or with extreme difficulty. The facilities that should be given to us are offered to IS. We have witnesses saying Turkey is giving weapons to IS.”

When I asked if the YPG is cooperating to escort the Turkish army’s supply runs to the isolated detachment at the Tomb of Suleiman Shah in Syria, Xelil said: “At one point, we cooperated with the Turkish army, But later IS said the Turkish convoy coming via Kobani cannot pass through its territory to reach the tomb. Now IS is providing passage to the Turkish army from Cerablus. The tomb has symbolic value for us also. It won’t be damaged. We guarantee to protect it.”

After our conversation with Xelil, I encountered Deputy Defense Minister Galiye Nimet. I asked her about YPG’s women’s wing, the YPJ (Women's Protection Units), and the women fighters coming from Turkey. She said Kurdish women were as equally involved in defense affairs as in social services. “We have set up training camps for women in all three cantons. Women are active in all fronts,” she said. “Of the first 20 martyrs we had when IS attacked Kobani, 10 were women. Last year, of our 700 YPG martyrs, 200 were women. Our first woman martyr was Selmo Guliselmo, who fell in Aleppo in 2012. Before the Rojava revolution, we were training women in small groups. The vast majority of women fighters are Kurds. A few Arab women joined us from places we liberated from IS. After the Serikaniye clashes, Kurdish women from Turkey joined also. This is much higher now, but I can’t give you a number."

I reminded Nimet of the legends we hear of IS militants fearing to encounter women fighters. She replied, “This is not a myth but reality. I personally met IS fighters face-to-face. Women fighters infringe on their psyche. They believe they won’t go to paradise if they are killed by women. That is why they flee when they see women. I saw that personally at the Celaga front. We monitor their radio calls. When they hear a woman's voice on the air, they become hysterical.”

In sum, while there are Turkish citizens in IS ranks, the number of men and women going over from Turkey to join the YPG and the YPJ is increasing. Opposing forces from Turkey are confronting each other beyond the border. When you add the murky relations of the Turkish government with various actors of the Syrian crisis, it is not hard to see that this war is increasingly becoming Turkey's war.