The steady stream of Turkey's Kurdish youths killed while fighting the Islamic State in Iraq and Syria have failed to make the news, further fueling tensions between the Turkish government and its Kurdish population. 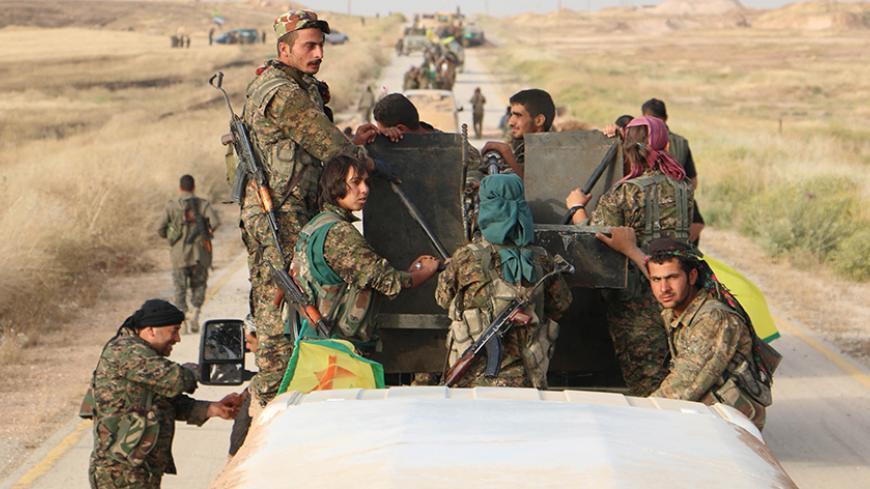 A convoy of Kurdish People's Protection Units (YPG) fighters enters the Syrian village of Tel Khanzir after taking control of the area from Islamic State fighters, in the western countryside of Ras al-Ain, May 28, 2015. - REUTERS/Rodi Said

While the de facto cease-fire with the Kurdistan Workers Party (PKK) means there have not been frequent reports of Kurdish martyrs for the past couple of years, Turkey's eastern and southeastern provinces continue to tremble with funerals of Turkey's Kurdish youths getting killed fighting the Islamic State (IS). Coffins come across the border nearly daily from Iraq’s Yazidi region of Shengal and from Hasakah, Qamishli and Kobani of northern Syria.

While 300 bodies have been handed over to their bereaved families, about 200 whose identities could not be determined were buried in Kobani and Shengal where they were killed. Sixty-three of those whose identities were unknown were buried in the Turkish town of Suruc. Many corpses remain in Kobani under the rubble of pulverized buildings. Then there are more bodies in the hands of IS that have not been recovered.

Most losses were sustained after IS captured Kobani villages and then a third of the town of Kobani. Intensification of Kurdish resistance against IS between Tell Abyad and Serakaniye east of Kobani and at Qamishli and Hasakah of Jazeera canton meant more bodies were coming from those locations.

On May 26, the bodies of six Kurdish youths were brought to Diyarbakir through Habur border crossing. After postmortems at Diyarbakir Public Hospital, funerals were held in Diyarbakir, Erzurum, Yuksekova and Siirt.

On May 27, two more bodies were brought across Mursitpinar border crossing. After postmortems at Urfa Hospital, the coffins were sent to their hometowns of Hakkari and Sirnak.

On May 28, the bodies of four YPG-YPJ fighters were received through Senyurt border crossing of Mardin and brought to Diyarbakir. These youngsters, who were killed in Mebruka on May 26, were buried in Kirsehir, Batman, Adana and Diyarbakir.

Two young fighters who were killed east of Kobani were buried in Diyarbakir and Bitlis on May 30.

Reports of fatalities have become almost a daily occurrence. Although Kurdish areas were shaken by these deaths, which are not much reported by the media and which are not mentioned in election campaign rallies, the rest of the country seems deaf and mute. Many Turks may feel that guns are silent in Turkey, but Kurds are still made to pay through a proxy war fought beyond Turkey's borders and hold the ruling Justice and Development Party government responsible.

The anger in the region is not confined to setting Rojava on fire with Turkey's unjust policies. The state is exhibiting its non-compassionate, surly face to the Kurds, starting with putting pressure on the families of those who joined the fight to navigating interminable red tape before remains are handed over.

The Mesopotamia Association to Assist Families (MEYADER), a nongovernmental organization that assists families in collecting the coffins of the deceased, has much to complain about. MEYADER co-chair Ayse Dicle told Al-Monitor of the serious problems that have been faced in receiving the coffins and arranging for postmortems.

“The postmortem is done for the prosecutor’s death registry needs but the state doesn’t give autopsy support to determine identities. We buried 63 people whose identities could not be established. Some of the corpses were in bits and pieces, defying identification. To prevent them from being buried in cemetery of the unknown, some Kobani families came and said they know them.”

Dicle said in the process of collecting bodies from the border to postmortems, "families die over and over." She explained, “Pressure starts after youngsters go to war. Their houses are raided, families are interrogated to find out where they had gone and why. Pressures continue with funerals. You can’t imagine the suffering of families bringing the coffins from the border.

“To prevent demonstrations at funerals, the governors don’t allow the coffins to be collected from the border in daytime. They also prevent collective funerals to prevent public protests. People from Rojava accompany the coffins to the border but they are kept waiting for hours.

“The governor doesn’t want convoys of more than 10 vehicles to accompany one coffin. We had the same crisis on [May 26] when collecting eight coffins. The governor kept saying a maximum 10 vehicles. If each family had a convoy of 10 vehicles, that would be 80 total. Some of the mourners had come all the way from Europe. People were stricken with grief but, but the governor’s only mission was to make sure that there would be no public demonstrations that might affect the coming elections.

“The other day there was an AKP rally at Gever. Three of the dead were from Gever. To prevent the coffins from arriving at Gever during the rally, they kept the bodies at the border for five hours, saying the computer system had broken down. We reached Diyarbakir at [3 p.m.]. They didn’t do the postmortem until [4 p.m.].

"On [May 28] when collecting four bodies the governor again created problems. We got to Kiziltepe at [8 a.m.] where it should have taken a maximum two hours to process the crossing formalities. They made us wait 12 hours. People were waiting on the other side to bid farewell to the bodies. They tormented both the Rojava well-wishers and us.

“Bodies don’t have to be taken to Diyarbakir for postmortems. For example bodies that come through Habur Crossing could be processed at Silopi. Instead their bodies are also brought to Diyarbakir and then sent back to Silopi. That means spending two days on the roads with the coffins. Bodies received from Kobani undergo [a] preliminary check at Suruc and are then sent to Urfa for postmortem. An autopsy takes a maximum of one hour. The prosecutor comes, writes his identification report but leaves without signing it. He comes back two to three hours later to sign it. This why the agony of families [has] no end.”

Dicle says nobody helps the families of the deceased. The state treats the dead as “PKK terrorists." She said, “The state is trying to intimidate the families. But families have been inured to this treatment for 40 years."

Ali Simsek, co-chair of the Diyarbakir branch of the Democratic Regions Party, made the following assessment to Al-Monitor:

“In Kurdistan, our people own up [to] the funerals. There are popular demonstrations on the roads they pass. There is much emotion. Of course, nobody really cares elsewhere in the country. Perhaps we have not been able to make our case. Kobani remained in the news for one day because of resistance against Daesh [the Arabic acronym for IS] and then people lost interest. But resistance on the ground continues today. The state with its classical approach is determined to make Rojava resistance appear as something put of the ordinary. In the eyes of the state the deceased are terrorists. But because of the growing sensitivity of the public, the state cannot be as rough as before. So they invent delays, apply red tape snags, prevent daytime crossings and thus hope to keep the mourners away. Even the Turkish left is uncaring. But what Daesh is doing is obvious. Look how they treat women. There is no empathy even for our martyred women.”

Frightening signals from Aleppo and Afrin

The Turkish government’s attitude, based on its forecast of the IS victory at Kobani, triggered violent demonstrations in many cities around the country.

Now the bodies keep coming following the recapture of Kobani, but defeat of IS in the area lowered tensions in Turkey. While IS still keeps the Kurds of Kobani and Jazeera under fire, attacks beginning with those on 28 of Aleppo’s Kurdish neighborhoods of Sheikh Maksoud and Asharifiye by groups supported by Turkey have rekindled concerns for the Kurds.

YPG spokesman Redur Xelil, speaking to Al-Monitor, said, ‘‘Groups [such] as [Jabhat al-] Nusra, Ahrar al-Sham and Al-Sultan Murad Brigade are making trouble. We spoke to them and they have ceased their attacks. Their attitudes toward Kurdish success are known. They may renew their attacks but we are preparing to defend our people.”

Xelil said rumors that the YPG has been attacking women and using snipers against opposition militants are baseless accusations to justify attacks on Kurdish districts.

Many people have noted that the attacks on Kurdish areas started after the arming of the Jabhat al-Nusra-led Army of Conquest by Turkey, Qatar and Saudi Arabia. Now, like the Sheikh Maksoud and Asharifiye districts, the pressure has been intensifying on Rojava’s third canton, Afrin.

If clashes erupt at Afrin and Aleppo, the flames can easily spread to Turkey as happened in Kobani, especially now that Turkey’s support of these groups has become public knowledge.