The killing of Saadet Dervis of Rojava by Turkish soldiers in front of her children while trying to cross the border into Syria has led to new scrutiny of Turkey’s Syria policy. 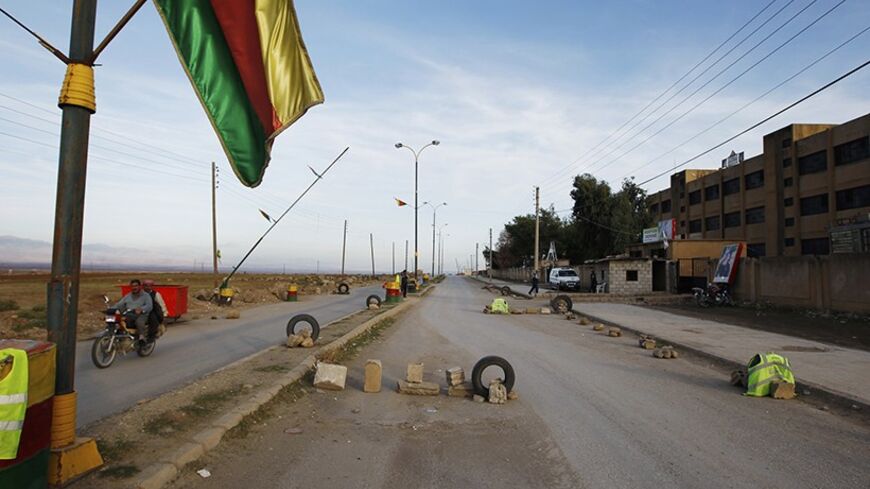 A security checkpoint is seen at Derik in Hasakah, Oct. 31, 2012. - REUTERS/Thaier al-Sudani

On the night of May 18, Saadet Dervis, 30, along with her two children and her father, attempted to cross the border from northern Syria's Rojava region, which is controlled by the Kurds, into Turkey. Her husband had gone to Turkey a few months prior. Dervis, also known as Saada Darwich, was fleeing an area under the control of the Islamic State of Iraq and al-Sham (ISIS).

As they approached the Turkish border near the Derik district that night, they were detected by Turkish soldiers. Dervis and her group waved and shouted that they wanted to cross the border. Their plea was met with fire from a Scorpion armored vehicle, and Dervis was hit in the stomach. She died in front of her young children and father, Mithat Dervis.

For two hours, soldiers did not allow Mithat to carry his daughter’s body across the border to Turkey. Around 11 p.m., Mithat disregarded the threats and dragged her body toward the armored vehicle. Finally, an ambulance was called and Saadet was moved to Cizre Public Hospital. After a postmortem examination, the body was delivered to relatives in Syria under the supervision of Maj. Hikmet Oz, the town gendarmerie commander. She was buried in Derik.

Also on May 18, Ali Ozdemir, 14, of Hasakah was shot in the face, losing both his eyes, while attempting to cross the border from Rojava into Kiziltepe-Senyurt. Ozdemir, who lives in Turkey, had traveled to Dirbesiye two weeks ago to visit his grandmother. In the border area, people must often cross minefields and hop wire fences to visit relatives.

If we set aside the massacre of 35 Kurdish youth at Roboski in 2011, doling out on-the-spot punishment for border violations is something new. Previously, when soldiers detected people trying to cross the border illegally, they would tell them to halt and would fire their weapons if they tried to escape. While armed groups like al-Qaeda-linked Jabhat al-Nusra and the Islamic Front cross the border freely, the policy of instant retaliation has truly upset the people of the region.

About 1,500 people from the Peace and Democracy Party (BDP) and the People's Democracy Party (HDP) marched from Cizre to protest the killing of Dervis. Kurds from the Syrian side also protested, and demonstrations were held on both sides of the border fence. HDP parliamentarian​ Faysal Sariyildiz​ and Cizre Mayor Leyla Imret were among the demonstrators. The crowd approached the wire fence and was challenged by water cannons of the gendarmerie. The tension eased after Sariyildiz told Cizre gendarmerie commander Maj. Oz: “Why don’t you intervene? Why didn’t you take the shot person to the hospital while her father was shrieking for help?” The officer replied: “We are brothers.”

The HDP, which questioned the firing on civilians while al-Qaeda-affiliated organizations openly crossed the border, demanded an investigation of those responsible. Hasan Ipek, the governor of Sirnak, responded to the reactions: "It is a very sad event. There was a misunderstanding there. We don’t yet know exactly what happened. The military prosecutor is investigating. [I] wish it hadn’t happened."

Tahir Elci, chairman of the Diyarbakir Bar Association, told daily Evrensel that illegal border crossings should be punished by execution. Raci Bilici, chief of Diyarbakir's Human Rights Association, said the soldiers on the border were ordered to shoot to kill as part of the government’s Rojava policy.

On April 16, nine Syrians attempted to cross into Turkey from the town of Suruc. Five were apprehended and four escaped. One returned to Syria and was wounded by fire from Turkish soldiers. Civan Muhammed, 15, who was caught and beaten by soldiers, died at Birecik Public Hospital. The Turkish military command said Muhammed fell during the altercation and died as a result of trauma to his head. But the postmortem said his skull was shattered, and an eyewitness said his cousin was hit with a rifle butt. Muhammed's body was sent to Kobani.

Syrian journalist Bazran aIso spoke to Al-Monitor by phone from Kobani and described the effects of the closed-border policy on Kobani: "Turkey’s border policy in the Kurdish region has changed recently. Entry to Syria is allowed through two crossings [Senyurt/Dirbesiye and Kobani/Mursitpinar], but only casualties are allowed to cross to Turkey from Syria. There is now targeted fire on illegal crossings, which appears to be a policy of deterrence. They definitely don’t want the Kurds to cross to Turkey. But in earlier discussions of PYD [Democratic Union Party] representatives, there was an accord to open the border to commercial crossings.

"The canton of Kobani is surrounded by ISIS. There is no electricity, no water. People drink water from wells. We are threatened by cholera. Turkey is the only place where people can meet their needs. Think, we don’t even have chickens. For Turkey to close the border means, 'Go surrender to ISIS.' In the border segments under control of Islamist organizations, everything is allowed to cross. Factories looted in Aleppo are carried across in trucks, and nobody says anything."

Saadet Dervis, Ali Ozdemir and Civan Muhammed are the most well-known victims of Turkey’s policy of punishing Rojava. Dervis walked to the border and returned in a coffin. The state did not repatriate her body through an official crossing, but handed it over the border fence she was trying to cross. What does this mean? Anything from militants, guns and booty can cross the border, but a woman from Rojava with her two children can’t.