A family finally triumphs over Turkey's embargo on the bodies of its citizens who were killed fighting for the Kurdish YPG against the Islamic State. 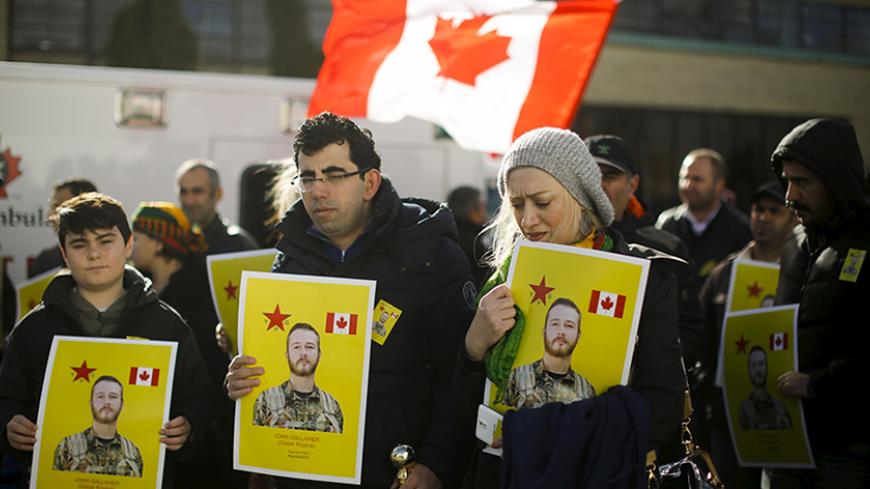 Members of the Kurdish community hold pictures of John Gallagher, a Canadian volunteer fighter and former Canadian forces member who was killed fighting alongside Kurdish forces in Syria against the Islamic State, in Toronto, Nov. 20, 2015. - REUTERS/Mark Blinch

There was a touching funeral Nov. 20 in Toronto. Children with flags and banners, police, a fire brigade and an official band were lined up as thousands of somber citizens bid farewell to a compatriot who had lost his life thousands of miles away in Rojava (Syrian Kurdistan). One banner carried by children read “You are our hero.” That hero was John Gallagher, a Canadian veteran killed Nov. 4 fighting in the ranks of the Kurdish People’s Protection Units (YPG) against the Islamic State (IS).

While the hearse bearing Gallagher’s coffin was proceeding to a cemetery accompanied with a police escort and an impressive convoy, the body of Turkish YPG fighter Aziz Guler was lying in a morgue in Kobani, Syria, where it had been for 59 days. Turkey had imposed an embargo to keep out the bodies of its citizens who were killed while fighting with the YPG. Turkey claims YPG is affiliated with the Kurdistan Workers Party (PKK), which Turkey and the United States consider a terrorist organization.

Before joining the battle against IS, Guler had been a senior at Istanbul Yildiz Technical University, studying politics and international relations. He was among the founders of Genc-Sen, a students' labor union, and was a member of the Socialist Democracy Party. He was among the best-known student movement leaders in Turkey, having been a guest on a major TV channel to discuss university autonomy, and he had debated with Justice and Development Party (AKP) partisans.

His family — impoverished Kurds from the southeastern province of Bingol — had migrated to Istanbul before he was born. Because of Turkey’s assimilation policy, he had never learned to speak his mother tongue, Kurdish.

When well-known actor Levent Uzumcu dedicated his speech at an award ceremony to Guler, interest in the deceased YPG militant grew. Uzumcu’s words were shared widely on social media for many days.

People wanted to know why Turkey was preventing the return of its own citizens' bodies. “They want to tell us that if you join a group they don’t want, even your body cannot be collected. This was their way of intimidating people,” Ersin Umut Guler, who had struggled to bring his younger brother's body home, told Al-Monitor.

The Guler family had gone to Kobani to collect the body but had to return without it with no explanation. They lodged an appeal with the Constitutional Court, but the court turned down the appeal.

The family next went to the European Court of Human Rights and then to the United Nations. All these appeals led to growing public interest in Turkey in the saga of Aziz Guler. His reputation spread. On Nov. 19, the AKP finally passed along "good news" to the family and issued a visa for the body to enter Turkey. Many people speculated the government finally granted the visa to keep Aziz Guler from becoming a national hero.

His brother said the family was conflicted about the "good news."

“We are embarrassed to be happy to get Aziz back," Ersin Umut Guler said. "It is so embarrassing to be happy because we can collect our coffin."

Turkey’s embargo on the bodies of its nationals fighting for the YPG came to light July 26 when the coffins of 13 YPG fighters, one of them a German national, were denied entry to Turkey via the Silopi border crossing.

Coffins were kept at the border for 12 days and were finally allowed to cross after discussions between Turkey's pro-Kurdish Peoples’ Democratic Party (HDP) and the government, and because of the persistent demands of their families.

But around that same time, 13 other caskets at the Mursitpinar border crossing were not allowed to cross into Turkey.

Since that time, the AKP had not allowed the body of any of its citizens killed fighting in the YPG ranks to cross the border. Although bereaved families waited for days at the border and staged protests, officials simply stated there was an embargo. Many families had no choice but to bury their deceased in Kobani.

Atilla Yazar, president of the Sanliurfa Branch of the Human Rights Association, said that before the embargo was introduced, every day three or four YPG bodies were brought over to the Sanliurfa morgue. He thinks perhaps 150 to 200 bodies since then were denied passage. Both Yazar and HDP deputy Ibrahim Ayhan said they have not been able to track down an official directive imposing such an embargo. Ali Haydar Hakverdi, deputy of the opposition Republican People’s Party (CHP), has submitted a parliamentary query to Prime Minister Ahmet Davutoglu for an explanation, but he hadn’t heard back at the time of this writing.

Ayhan said all efforts to understand what is going on have been futile. He said the embargo is directly linked to the AKP’s Rojava and Kurdish policy. “This is an outcome of their attitude to the Rojava system. It can’t be dissociated from their relations with IS,” he told Al-Monitor.

According to numerous news reports, thousands of mourners attended Aziz Guler's funeral Nov. 22 in Istanbul, and that night demonstrators protested the embargo.

Journalist Metin Yegin, who knew Aziz Guler before Guler joined the YPG, will try to tell the world of this heart-wrenching tragedy on the Turkey-Rojava border with a movie he plans to produce. It will be about a mother waiting for a man to smuggle the body of her son from Rojava.

Yegin, well known for telling Turks about the resistance movements in Latin America, has met scores of families in Argentina, Kosovo and South Africa whose children were killed. Yegin said this embargo in Turkey was the first of its kind in the world.

“A mother, when demanding the body of her son, is actually demanding a part of her own body. This is not just asking for a body, but for all the past of the victim,” he told Al-Monitor.