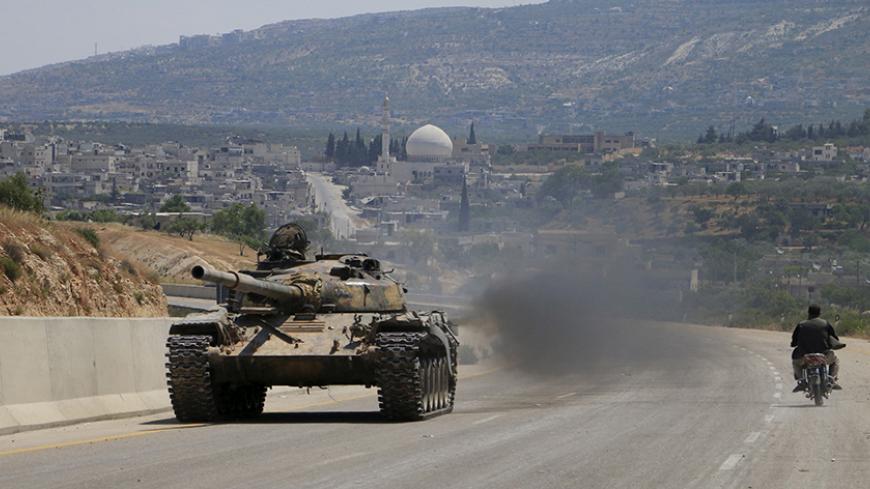 Jund al-Aqsa fighters, part of a coalition of rebel groups called Jaish al-Fatah (Army of Conquest), drive in the Idlib countryside in a tank on a highway that connects Damascus to Aleppo, near Psoncol town, after saying they had taken control of it, June 6, 2015. - REUTERS/Mohamad Bayoush

The future of Turkey’s controversial Syria policy has become even more uncertain with the Justice and Development Party's (AKP's) loss of a parliamentary majority. Any potential coalition partner with the AKP — still the leading party, although it cannot form a government — will approach Syria totally different than the AKP did.

The Republican People’s Party (CHP), the Nationalist Action Party (MHP) and the Peoples’ Democratic Party (HDP) have accused the AKP of becoming a party to the Syrian crisis by arming groups fighting Syrian President Bashar al-Assad's regime, allowing foreign militants to cross our borders and helping organizations such as the Islamic State (IS) and Jabhat al-Nusra to become prominent forces.

Many believe that one reason for the AKP’s dismal showing in the 2015 elections is its policy on Syria. While the AKP’s militant base angrily asks in Internet messages, "Who lost the elections? Jerusalem, Syria, Egypt and Somalia did,” there are those among the AKP founding fathers who believe that votes were lost in provinces bordering Syria and among Kurds in general because of the AKP’s mishandling of Rojava and Kobani. These seniors now think that a new course of action is essential to solve the Syrian crisis.

The number of AKP deputies from Hatay, Kilis, Gaziantep, Sanliurfa, Mardin and Sirnak provinces bordering Syria dropped from 30 to 20, and the AKP was totally wiped out in five heavily Kurdish-populated provinces.

The change of power structure in Turkey came precisely at a time when the new Saudi Arabia, Qatar and Turkey partnership is changing the balances in the field against Assad's regime.

The double-pronged strategy of the partnership sought to arm and expand the territory dominated in the northern front of Idlib and Hatay and the southern front of Daara, Quneitra, Suwayda and Damascus via Jordan. The Turkish prong of this strategy is now up in the air.

After the shipment of weapons via Turkey, the Army of Conquest captured Idlib, Jisr al-Shughur, Ariha and Mastume. The Syrian army also lost some locations in the south. In the latest development, the 52nd Brigade, which was 100 kilometers (62 miles) south of Damascus, had to abandon its base.

On the northern front, the objective of the Army of Conquest is to capture Aleppo and Latakia after Idlib and then move toward Damascus. Before Turkey’s elections, there were reports that Turkey was about to send troops to Syria along with Saudi Arabia to set up a buffer zone. The second prong of the strategy developed by the Turkey-Saudi-Qatari alliance is to devise a new approach in the south. The south front, commanded from an operations room in Amman, Jordan, in the presence of Western intelligence officials, will hopefully be reorganized under the leadership of Zahran Alloush, commander of the Army of Conquest.

Reports say that Alloush was in Istanbul last month to meet with opposition representatives and then in Amman to meet with Gulf and Western intelligence services.

The scenarios for government change in Turkey will not affect support for the opposition from Amman, but the future of the northern front will depend mostly on Ankara’s new attitude. If the new government in Ankara does not agree to continue with the Turkey-Qatar-Saudi Arabia partnership, then the flow of weapons via Turkey will cease. In such a case, it won’t be easy for the Army of Conquest to hold on to the territory it has captured in Idlib and the vicinity.

The Syrian army is now massing around Idlib and preparing for a major offensive. According to journalist Mehmet Serim, who is reporting from Damascus, Assad's regime was waiting for the Turkish elections for its major offensive.

There are also reports that Iran has moved 5,000 to 15,000 fighters it gathered from Iraq, Iran and Lebanon to the region, and Hezbollah is trying to expand its operations from Qalamoun as far as Aleppo.

The Syria crisis has five dimensions of major concern for Turkey:

Regarding arming the opposition and controlling the border, the AKP will have to listen to voices from its own ranks as well as from any potential coalition partner. A more concrete and determined line can be expected in combating IS. The new government will find it very hard to introduce a new approach to the refugee issue or to send the refugees back. On Rojava, the MHP and the HDP have sharply opposing views. If the new government is to include the MHP, then relations with the Kurds could deteriorate.

The AKP appears to be heading for an in-house account settling. An AKP founder, who spoke anonymously because of the sensitivity of the issue, told Al-Monitor, “Syrian policy played a part in our defeat. Although there may be a minority [in] our base that will say this is a loss for Jerusalem, it is obvious that we lost the Kurds because of Kobani. Until today, the AKP was the party with [the] most Kurdish votes. Syrian policy must change. When Abdullah Gul was the president, he had warned the government but to no avail. The priority must be to end the clashes in Syria.”

Diplomat Murat Ozcelik, vice chairman of the opposition CHP who has entered parliament as a deputy from Istanbul, said if they join a coalition government, they will seek radical changes to repair relations not only with Syria, but also with Egypt, Iran and the European Union.

Ozcelik told Al-Monitor, "To secure a cease-fire [with] Syria, we will initiate dialogue with all parties including the Assad government. We will talk to anyone we have to, including Iran. After stopping the bloodshed, we will go for a political settlement. AKP’s Syria policy has borne disastrous results for the region and for Turkey. This can’t go on."

HDP co-chair Selahattin Demirtas, in his interview with CNN International, said a new coalition cannot continue with the current Syria policy. "I don’t believe that a coalition government will continue to support IS and other radical groups in the region,” Demirtas said.

In short, changing the policy on Syria appears to be a prerequisite of parties to enter into a coalition with the AKP. The AKP might also have to look for a new course of action for its own internal harmony.