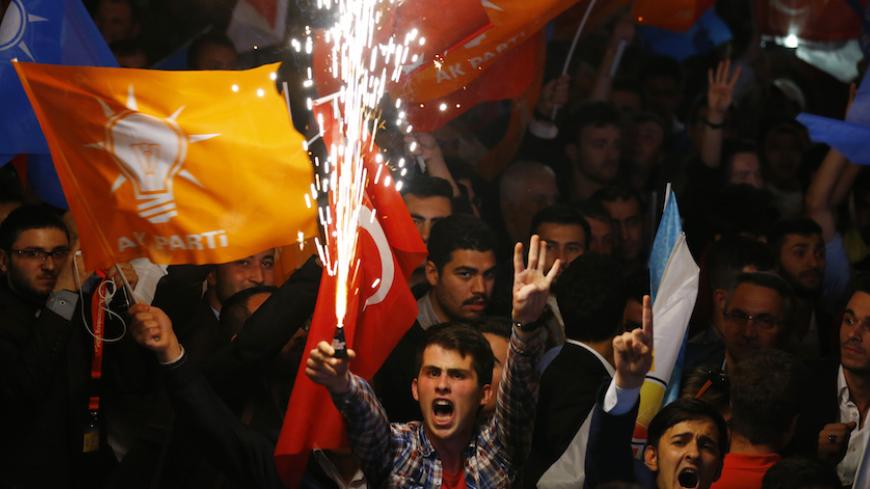 Fehim Tastekin writes that some Justice and Development Party (AKP) members are asking whether Turkey’s Syria policy may have contributed to the ruling party’s loss of as many as 53 seats (when it went from 327 seats to 258, out of 550) in the Grand National Assembly elections last week:

“Many believe that one reason for the AKP’s dismal showing in the 2015 elections is its policy on Syria. While the AKP’s militant base angrily asks in Internet messages, ‘Who lost the elections? Jerusalem, Syria, Egypt and Somalia did,’ there are those among the AKP founding fathers who believe that votes were lost in provinces bordering Syria and among Kurds in general because of the AKP’s mishandling of Rojava [Western Kurdistan] and Kobani [in Syria]. These seniors now think that a new course of action is essential to solve the Syrian crisis.”

A re-think of Syria policy could open debate on whether Turkey is doing enough to halt the supply of weapons and financing to jihadist groups, and to fulfill its commitments as a NATO ally in the US-led coalition against the Islamic State (IS), stances that have frustrated international efforts to crack down on foreign fighters in Syria.

Tastekin reports: “Regarding arming the opposition and controlling the border, the AKP will have to listen to voices from its own ranks as well as from any potential coalition partner. A more concrete and determined line can be expected in combating IS. The new government will find it very hard to introduce a new approach to the refugee issue or to send the refugees back. On Rojava, the MHP [Nationalist Action Party] and the HDP [Peoples' Democratic Party] have sharply opposing views. If the new government is to include the MHP, then relations with the Kurds could deteriorate.”

Those advocating a change in Turkey’s Syria policies may have an ally in the Turkish military. Metin Gurcan describes an officer corps favoring a more cautious approach in Syria: “Most of the officers Al-Monitor spoke with emphasized national legislation and international law when speaking about Syria; all of them agreed that all international engagements about Syria must be based on legal justifications and not go beyond them.”

Turkish President Recep Tayyip Erdogan’s decision to give priority to deposing Syrian President Bashar al-Assad, rather than containing foreign fighters, is backfiring, as IS begins to have Turkey in at least its ideological sights.

Gurcan reports: “For the first time, we see how closely IS is monitoring the changes in political Islam in Turkey, and how it is looking for a place for itself in that transformation. There is no doubt that Turkish Islamism represented by the AKP has been tarnished with corruption allegations. IS appears to be fusing its ideology with Islamism and Ottomanism in Turkey to create a new radical Islamist school of thought there that could motivate the Islamist masses already disengaged from socio-economic life and democracy closer to IS.”

Semih Idiz writes that early AKP soundings into the defeat indicate that “the image of profligacy, waste and corruption … alienated large portions of the electorate.”

Idiz reports that despite some efforts at self-criticism, some AKP figures and supporters in the media have insinuated that “external forces” are behind the party’s losses. And it may be unrealistic to expect Erdogan to lead the AKP toward more inclusive policies.

Idiz concludes: “The prospect of Erdogan assuming a socially unifying and pacifying role appears unlikely, however. It is after all he who, according to many of his domestic and foreign critics, is the cause of much of the division and social unrest we see in Turkey today. It is also he whose bellicose campaigning in the lead-up to Sunday’s elections, when combined with his openly declared but now effectively dead ambition of becoming Turkey’s sole leader, may have been one of the main causes why the AKP lost so much support.”

Arad Nir does not rule out a change in Turkey’s stance toward Israel. While some Israeli decision-makers may believe that “a weak Erdogan is good for Israel,” Nir contends that “this may not be necessarily true. Erdogan’s decision to rehabilitate relations with Israel, at the appropriate time, was made at the peak of his power.”

Eastern patriarchs: "Stop the wars in our land"

The five Christian patriarchs of Antioch held their annual meeting in Damascus on June 8 to “confirm more than ever that we are staying” in Syria and the region.

Jean Aziz writes that “the patriarchs’ presence in Damascus at this particular time may be seen by the Syrian regime’s opponents as support for the Syrian government by the Eastern churches. Therefore, the church leaders were careful in handling this issue, especially in light of past experiences.”

Aziz reports that in September 2014 “the patriarchs met with US President Barack Obama [at the White House]. The meeting’s agenda caused an uproar in Beirut, because the patriarchs and bishops had told Obama that Syrian President Bashar al-Assad provided protection to the Christians in Syria, in light of the extremism emerging among his opponents.”

At that meeting Obama “emphasized that the United States recognizes the importance of the historic role of Christian communities in the region and of protecting Christians and other religious minorities throughout the Middle East,” according to a White House statement.

Christians account for approximately 10% of Syria’s 22 million citizens, and many consider the Syrian government as its only protection from a likely miserable fate at the hands of IS and other jihadist and Salafist groups that have been gaining ground in the war.

Lebanese Minister of Foreign Affairs and Emigrants Gebran Bassil cautioned in an interview with Al-Monitor in March that the region’s Christian communities were vanishing, saying, “They are leaving. It is not a risk, it is a reality.”

Edward Dark reported for Al-Monitor on the devastation wrought on Aleppo’s remaining besieged Christian community when they fell under bombardment on April 10, Good Friday in the Eastern Christian calendar, reporting the event as “a terror-filled nightmare that sent new shock waves of despair and terror.”

Syria’s Christians likely take cold comfort in the efforts by US regional partners to make the case for collaboration with alleged moderate factions within al-Qaeda affiliate Jabhat al-Nusra, as reported this week in the Wall Street Journal. This column has for 18 months warned of this alarming trend by those advocating an al-Qaeda makeover in Syria to keep the pressure on the Syrian government.

Aziz concludes that “the political aspect of the meeting in Damascus seems to be clear despite [Patriarch of the Melkite Greek Catholic Church Gregory III] Laham’s assertions. [Greek Orthodox Patriarch John X] Yazigi’s invitation of the Eastern patriarchs to Damascus falls within the scope of coordination between his church and Moscow, and [Maronite patriarch of Antioch and head of the Maronite Church in Lebanon Bechara al-] Rai’s visit to the Syrian capital was made possible through coordination efforts between him and the Vatican. Hence, the meeting in Damascus can be seen as an attempt to find another source of protection for the Christians of the region. However, providing protection to the Christians from extremists is a challenge. The meeting in Damascus coincided with the first anniversary of the displacement of Christians from Mosul, the Ninevah plains and several villages in Iraq, following the invasion of the Islamic State.”