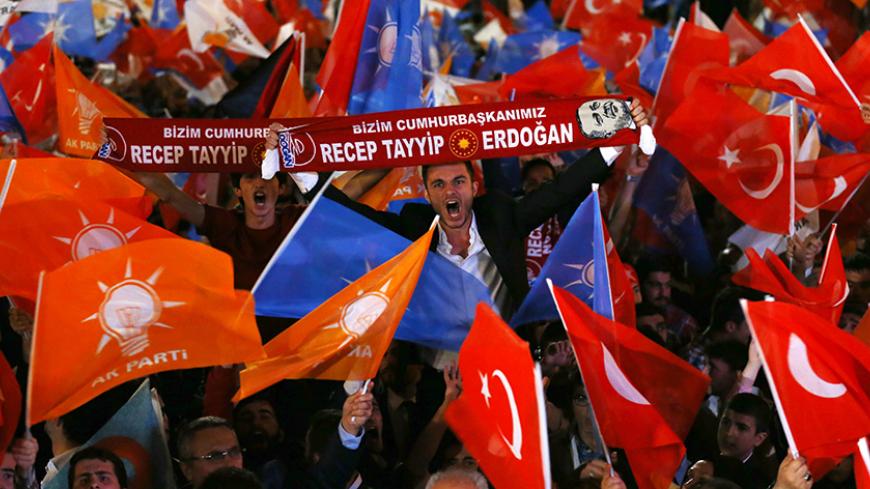 Following the devastating losses the Justice and Development Party (AKP) incurred in Turkey's parliamentary elections on June 7, eyes are on the large segment of the Turkish media, which over these past few years have been co-opted by the AKP to promote its ideological agenda and bolster President Recep Tayyip Erdogan’s political ambitions.

While there were those in the pro-government media who predicted before the polling that there would be a relative decline in support for the AKP, few expected it to lose the parliament majority that has enabled it to rule the country without any encumbrance over the past 13 years.

Although the AKP got 41% of the vote and once again finished first, it lost its pre-eminence in Turkish politics; it will not only have to be more cooperative in its dealing with other parties in parliament, but it will also have to shelve many of its political projects, a fact that avid supporters of the AKP are having difficulty coming to terms with.

Prime Minister Ahmet Davutoglu wasted no time in ordering an investigation into the underlying reasons for the AKP’s failure, and the first soundings within the party reportedly indicate a prevalent belief that it was the image of profligacy, waste and corruption that alienated large portions of the electorate.

This brings to mind Erdogan’s overly ostentatious presidential palace, as well as remarks by government ministers in support of Erdogan who uttered, for example, that the cost of dozens of expensive luxury cars allocated to high officials is negligible in terms of the country’s vast budget.

Some in the pro-government media also accept this assessment about the fall in support for the AKP. There are also those who criticize the AKP's support for the 10% electoral threshold parties had to pass to enter parliament, arguing with hindsight that this barrage was inordinately high and worked against the AKP in the end.

Despite such soul-searching and self-criticism, though, many leading pro-Erdogan columnists are clearly finding it hard to accept the objective reasons being put forward for the AKP’s failure. It is business as usual for them as they cling to their by-now accustomed accusations about “external forces and their domestic lackeys,” and claim that these successfully engineered an underhanded, anti-Erdogan and anti-AKP climate prior to the elections.

Erdogan, who has been uncharacteristically silent in the aftermath of the elections, stirred the conspiracy cauldron himself, of course, with the angry and offensive manner in which he campaigned for the AKP prior to the elections — in flagrant violation of the neutrality required from him by the constitution — and attacked his critics with the usual litany about foreign and domestic quarters allegedly out to denigrate him and undermine the AKP’s successes.

Foreign Minister Mevlut Cavusoglu also carried grist to this mill after the elections when he said insinuatingly and without elaborating that the international media coverage of the elections made it apparent who was happy about the state of affairs that has now emerged in Turkey.

His remarks were made against the backdrop of the angry attack by Erdogan against The New York Times for its critical coverage prior to the elections.

Picking up on this theme, Ibrahim Karagul, editor-in-chief of daily Yeni Safak, which acts as a principal mouthpiece for the government and Erdogan, wrote after the elections that there were “external actors” who supported the project of domestic actors to undermine the AKP.

“Those outside the country and within it worked, not to make a specific party come to power, but to prevent the AKP from coming to power on its own. They targeted the stability provided by a single party. To put it more correctly, they targeted the energy, strength and defiance Turkey has been displaying in recent years. Turkey for them was becoming a regional power and had to have its nose rubbed in the mud,” Karagul argued.

Karagul insisted that there was no cause to lament the results of the elections because the AKP had still come out markedly ahead of the other parties with at least 40% of the overall vote and proved that it is the main political force in Turkey. He also conceded in passing that the AKP was a victim of the 10% electoral barrage “which punishes the party that comes first.”

There are also those in the pro-government media who are engaging in scaremongering on behalf of the AKP by arguing that the results of these elections have opened a period of uncertainty and chaos in Turkey and suggesting vindictively that if this is what the electorate wants, then this is what it deserves.

One such columnist is Ahmet Kekec, from The Daily Star, which also acts as a mouthpiece for Erdogan and the AKP. Kekec wrote in his column that the election results point to a “dramatic severance and a return back to square one” for Turkey.

“This is a result in which uncertainty, adventurism and chaos will replace stability. The voter said, ‘I want a country full of uncertainty’ this time. We greet this with respect and say, ‘If that is the Turkey you want, well then you can have it and enjoy it to your heart’s content.'"

There are also examples of pro-AKP journalists who are starting to abandon ship after it became clear that the party they supported so avidly until recently would come out much weakened from these elections, thus ending Erdogan’s dream of becoming an executive president.

Not surprisingly, these journalists are facing angry recriminations and much name calling in both the pro-AKP media and the anti-AKP media. One of these former pro-AKP “pen-slingers” — the term used in Turkey to define them — is Sevilay Yukselir, a columnist for daily Sabah, which is also a daily that was co-opted by the AKP.

In a totally uncharacteristic announcement just prior to the elections that shocked AKP supporters, Yukselir expressed her disappointment over the government’s handling of the Kurdish issue in Turkey and said she would be voting not for the AKP but for the pro-Kurdish Peoples’ Democratic Party. She also made highly disparaging remarks about senior AKP figures.

Yukselir, who also hosts a political talk show on television, went on the defensive after being disparaged as a shameless opportunist for trying to hedge her bets after having sensed that the AKP’s days of unimpeded power may be ending. She was summarily dismissed by Sabah over her change of position and is now considered to be one of the former pro-AKP journalists who may end up having to find a new occupation.

There are also deeply disappointed pro-AKP journalists who are wishfully arguing now that the imminent political chaos that will follow these elections will enhance Erdogan’s position by casting him in the role of stabilizer and savior.

Abdulkadir Selvi, a columnist for Yeni Safak, who is also one of the most prominent and controversial media supporters of Erdogan and the AKP, leads the list of those who are thinking along these lines.

“That which was feared has happened. This is the beginning of hard days for Turkey. If a new government cannot be formed and the situation ends up in a deadlock — in other words, if a situation emerges where there is the threat of Turkey heading for chaos, then President Erdogan will become Turkey’s insurance,” Selvi argued in his column after the elections.

The prospect of Erdogan assuming a socially unifying and pacifying role appears unlikely, however. It is after all he who, according to many of his domestic and foreign critics, is the cause of much of the division and social unrest we see in Turkey today.

It is also he whose bellicose campaigning in the lead-up to Sunday’s elections, when combined with his openly declared but now effectively dead ambition of becoming Turkey’s sole leader, may have been one of the main causes why the AKP lost so much support.