Why did pro-government media fail Erdogan?

Erdogan’s choice of press corps for his Russia trip suggests that a more hawkish faction among the pro-AKP media is likely to gain access to the president’s ear. 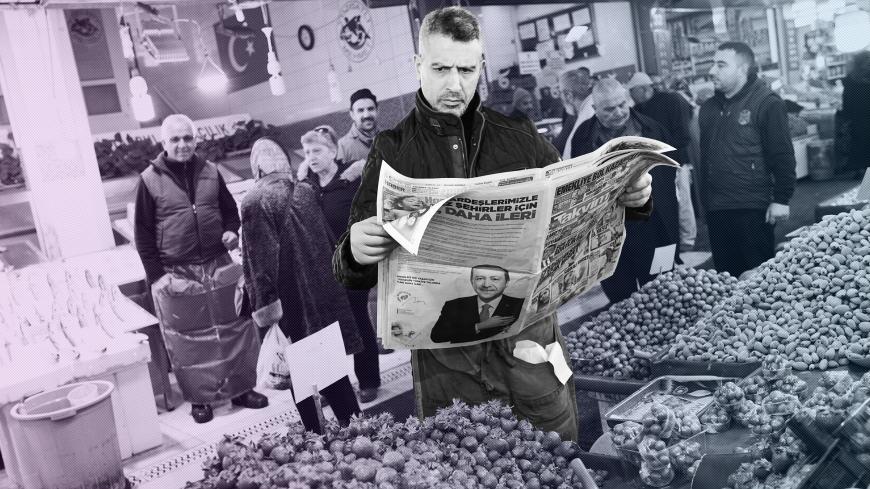 A stallholder reads a newspaper as he waits for customers at a bazaar, Ankara, Turkey, March 26, 2019. - REUTERS/Umit Bektas

As results were being finalized on the night of the municipal elections on March 31, most Justice and Development Party (AKP) elites were unhappy. One senior member anonymously told Al-Monitor, “There are two major losses that cannot be hidden. First, the CHP [the main opposition Republican People’s Party] now has control of six of 10 major cities.” In 2014, the CHP had won only the city of Izmir. He added, “Plus, in cities we won, we see the worrisome result in cities seen as AKP bases. In Konya, we lost 14.5%, in Urfa 11.5% and 10% in Antep. We had control of all financial and social means: commercials, polling companies and the media. How did this happen?”

Indeed, this is a question frequently heard after the shock of March 31 in Ankara. Pro-AKP entities make up almost 90% of the media in Turkey. Not only does the government run most media outlets, but it has also successfully silenced any critical and honest voices. The Turkish Journalists Syndicate reports that 133 journalists are currently in jail. The Turkish government exercises legal pressures on expression of opinions in public from social media outlets to all other platforms of communication. Add this to Erdogan’s intense campaign rhetoric centered on the survival of the country and labeling opposition candidates as legally dubious people, and it is quite impressive to see the accomplishments of the opposition parties.

Another group that immediately started spreading fake news about Istanbul results is known as the Pelican clique. The group is led by Sabah daily’s columnist Hilal Kaplan, who was best known for her role in bringing about the end of Ahmet Davutoglu’s political career. Kaplan tweeted on April 1 that results of the elections were not valid and a new election had been called by the Supreme Election Board. This was fake news.

Later, she tweeted a correction. Other bogus news stories were quickly spread through the cliques’ network, stating arrests of election supervisors or attacks of CHP members against the police. Authorities denied them. Columnist for Cumhuriyet daily Baris Terkoglu and several others observed a brawl within different factions of the state establishment in Turkey.

As Erdogan’s April 8 Russia visit approached, all eyes were on a photo from the plane. It has become customary for there to be a photo of the press corps with Erdogan during his trips. All pro-AKP journalists wait anxiously to be invited to these trips. The invitation is interpreted as tacit approval of the media outlet and the journalist. Given the setbacks of the March 31 elections, the opposition was initially hoping a more moderate press corps photo would be released on the way to Moscow.

All hopes were dashed as the photo emerged. The photo had not only Kaplan and Karagul but several other most hawkish figures of the campaign and post-election propaganda. One of them was Turgay Guler, executive editor of Gunes Daily who also conducts a political television program. Before the election, Guler hosted Ekrem Imamoglu, Istanbul’s newly minted mayor from CHP. Yet as an aggressive host he chose to bombard Imamoglu with baseless allegations and insults. Imamoglu was extremely patient. Audiences from all political affiliations saw Imamoglu not only as an underdog but also as a mature leader who can stand his ground. The program aimed to taint the reputation of Imamoglu, who had little to no television visibility on mainstream media. It backfired. Nationalist daily Yeni Cag reported that the public was angry with Guler as he would not let Imamoglu speak and was rude to him. Most social media users concurred the rude treatment of Guler indeed boosted public support for Imamoglu.

Guler was not an exception to how the pro-AKP media treated the opposition candidates. There were several other instances where senior opposition leaders’ statements were cut off as cameras turned to AKP figures or they were ridiculed. “Journalists working for the pro-AKP media were under incredible pressure from their bosses who knew well that the AKP was losing. Most of these people were told if they wanted to keep their jobs they need to discredit the opposition as much as possible. Yet without sufficient evidence and training these amateurs appeared as angry, arrogant bullies.”

This finally turned off all audiences, including the AKP’s conservative voting base. Their questions to Erdogan were trivial and irrelevant. People were simply fed up with these misguided mouthpieces. We know this “because the ratings, which are not even published properly in Turkey, show Erdogan and the pro-AKP media at the bottom of the list,” said a professor of communication (on the condition of anonymity) at a university in Ankara. A majority of the public follows the news from alternative sources in Turkey now. For example, Unsal Unlu — a prominent journalist with decades of experience — has been running his own show from his home office since August 2015. The show has reached and stayed at the top of the lists on different platforms — YouTube, SoundCloud, iTunes — reaching out to millions of viewers. Hundreds of journalists have been declared the “opposition” and marginalized in Turkey, and gradually they have established different networks to help produce and disseminate news and analyses both inside and outside Turkey. ArtiTV, for example, has reporters in several Turkish cities but also those who live in Europe. Medyascope is another example of successful reporting platforms.

In addition, foreign media outlets have become increasingly popular in Turkey. Several foreign media outlets publish in Turkish and are quite popular. Sometimes their popularity in Turkish surpasses the original. For example, Russian media outlet Sputnik’s international Twitter has 250,000 followers, whereas Sputnik Turkiye — which has radio, YouTube and online news in Turkish — has 688,000 followers. BBC, DW along with Al-Monitor all find sizable audiences in Turkey. In other words, Erdogan has successfully monopolized mainstream media, but due to incompetent crony journalists, their reporting and shows have lost credibility. It is quite common to find people at random street interviews declaring the AKP’s most favorite political news reporting channel A Haber as laughable.

The communication professor said he expects to see a radical shuffle and quite a possible downsizing in the Turkish media as revenue sources plummet. That is another important factor why some of the AKP’s fervent cheerleaders are in a state of panic over the loss of financial hubs in Turkey, particularly in Istanbul. A seasoned Islamist journalist who was one of the main figures of the AKP in the early years told Al-Monitor, “Istanbul has 39 districts — plus connections with all other cities. Now these districts, as well as the metropolitan municipality, carry conferences or training sessions for youth interested in media, and these have become serious income for pro-media journalists.” The journalist, who no longer works for any media outlet, said the honorarium “is a good amount of money plus gifts such as iPads, laptops and local gourmet produce.” Now these are all under-the-table payments that are most likely not documented. “If the richest municipalities are lost to opposition, these extra payoffs would be significantly curtailed," said the journalist.

On a larger scale, the owners of these media outlets are also getting paid through the tenders they are guaranteed from the government. Their ability to pay journalists and other employees depends on their income from other businesses as the media outlets’ profits dwindle. In 2018, Demiroren Company’s most prestigious newspaper, Hurriyet, lost 12% of its revenue and 9% of its sales. It is expected to get worse in 2019 as Hurriyet alienated a majority of its dedicated readers during the campaign with its false allegations.

In the post-election period, a turbulent time awaits Turkish mainstream media — which is quickly becoming marginalized. Its unqualified faces, angry and arrogant attitude, repeated false and fake reporting, blatant coziness with the government elites and low-quality programs have turned off most viewers. Yet the young and vibrant Turkish population has a deep interest in politics. Their quest is mostly met with well-trained, professional and experienced journalists reporting at independent or foreign media outlets. These, once considered marginal, are now becoming the new popular mainstream breed.