Boji, the stray dog that has captured hearts riding trains across Istanbul, has become the target of a smear campaign in the most literal sense. 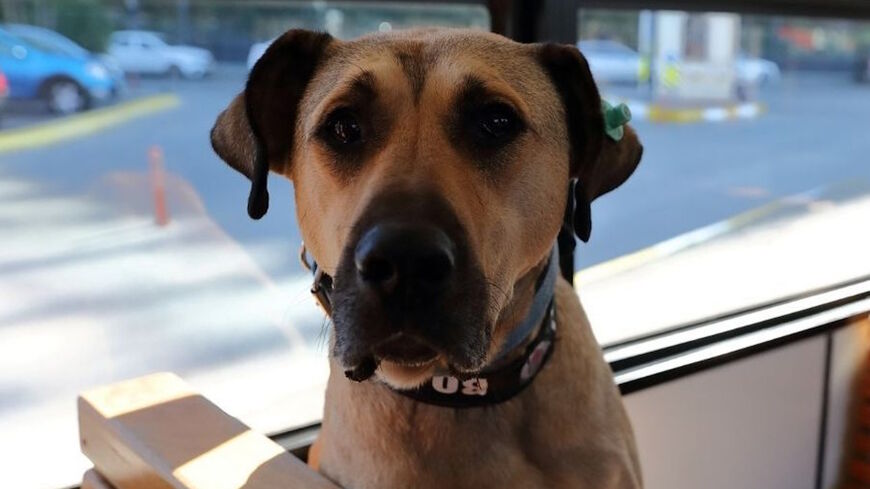 IZMIR, Turkey — Boji, the canine commuter who has captured the hearts of the public through videos and pictures as he navigates Istanbul’s public transportation system, has become the target of a defamation campaign pitting Istanbul’s opposition-run municipality against the ruling Justice and Development Party (AKP).

In Turkey’s polarized climate, everything from dead poets to domestic violence can be recruited for political conflict. The most recent controversy, however, was surprising even by Turkish standards: It's over dog poop.

The Boji Conspiracy, as Turkish columnists are calling it, started on Nov. 19 when a social media user posted a photo of dog feces on the tramway, claiming that it had been left by Boji. “Boji, on the payroll of Istanbul Municipality, shat in the tramway,” tweeted the pro-AKP blog Sagdan Haber (“News From the Right”), which spews a steady stream of critiques targeting Ekrem Imamoglu, the city’s mayor from the opposition Republican People’s Party (CHP) and a possible candidate for the 2023 presidential elections.

The response of the Turkish-speaking Twittersphere was immediate. Critics, some of them possibly weary of the frequently posted adventures of the dog-about-town, claimed that Boji had become spoiled with attention, while others claimed that it was highly unlikely that the dog would defecate on a seat. Yet others cracked jokes about the state of the city’s public transportation if the municipality’s own mascot found it appropriate to poop on.

Boji, a lean Anatolian shepherd mix with a serene demeanor and 127,700 Twitter followers, issued an immediate denial. “I was at the shelter the whole day with my trainer,” he (or possibly an accomplice) tweeted. Someone “planted feces to frame me. How wicked can you get?”

Then came a video posted by the Istanbul municipality’s spokesperson Murat Ongun. It showed a man taking feces out of a plastic bag in his pocket and planting it on the tram seat.

Boji, who has a larger following than the municipality, retweeted the clip, saying, “I was ashamed on the behalf of the man when I saw the images.”

The framing of the internationally acclaimed dog immediately become a trending topic on social media with the hashtag #Bojiwillnotwalkalone. Though there have been no statements about the identity or the political stance of the man who planted the feces, many social media users pointed an accusing finger at AKP trolls and local AKP official Mehmet Tevfik Goksu, the deputy chair of Istanbul Municipal Council.

“The media outlet that broke the story of the feces is actively supported by Goksu,” reported nationalist daily newspaper Yeni Cag, claiming that the politician wants to unseat Imamoglu and become mayor in the next elections in 2024. Speaking to Haberturk columnist Nagehan Alci a day later, Goksu brushed off the claims as too ridiculous to comment on.

The blame game and jokes flourished on social media and in the newspapers. Can Okar, whose sardonic tweets on Turkish affairs have thousands of followers, posted a series of tweets on just what Boji might be responsible for. “AKP releases footage of Boji, the opposition dog, taking part in a coup to undermine the Turkish lira,” he tweeted, an allusion to President Recep Tayyip Erdogan’s claims that “external forces,” rather than his unorthodox interest rate policies, are responsible for Turkey’s economic woes. In another tweet, he added, “It was Boji who drank beer at the mosque” — a reference to claims that a group of protesters at the 2013 Gezi Park events had violated the sanctity of a mosque by drinking alcoholic beverages there.

The AKP and its trolls “have used every trick in the book from fake news to doctored photos to defame Imamoglu,” wrote Yilmaz Ozdil, a fierce AKP critic with a particular fondness for conspiracy theories, in the opposition daily Sozcu. “They have finally stooped to throwing shit at a dog, literally and figuratively.”

Istanbul in general and the city’s public transportation system in particular have been a battleground between the AKP and Imamoglu, who snatched Turkey’s cultural and commercial capital from the AKP in 2019. In a symbolic gesture of ownership, the Ministry of Transportation announced in September that it would post the letter “U” (for “ulastırma,” Turkish for "transportation") on metro stations built by the ministry. The municipality objected to the decision, saying the Istanbul metro has been designated by the letter “M” since 1992. Imamoglu faces obstruction from Ankara on a wide range of issues, including the recent rezoning of the Princes' Islands.

In efforts to get their points across, opposition municipalities seek subtle ways to reach out to the public. “Both Istanbul and Ankara municipalities have come up with animals that have appealed to a wide audience, particularly women and young people,” said Seyda Taluk, author of “How to Win Elections.” In Ankara, Mansur Yavas, another CHP mayor and a potential presidential candidate, often exchanges playful tweets with his cat, Khaleesi of Ankara.

“The framing of Boji looks like a not-so-smart attempt to defame Imamoglu. But irrespective of whether it was a political framing or not, it will go down in political communications as an epic fail that has backfired,” Taluk told Al-Monitor. Noting that the animal rights movement is one of the most organized in Turkey, targeting Boji so clumsily with in the hope of smearing Imamoglu was very counterproductive, Taluk added.

But the recent exchange may mean the end of Boji's time as the mascot of Istanbul municipality, as he might have become too much of a target. “We are looking for a place — ideally with a large garden — where Boji can stay,” said Ongun.

The first offer came from Nesin Mathematics Village, a science academy founded by Ali Nesin near Izmir on the Aegean coast. The village’s official account tweeted, “We have expressed our desire to provide a home for Boji — we have no tramway but we will carry him on our back.” Perhaps the popular canine of Istanbul, like many residents of the big city, will find peace in the Aegean region away from politics.