Boji the street dog has amassed thousands of followers, including a politician or two. 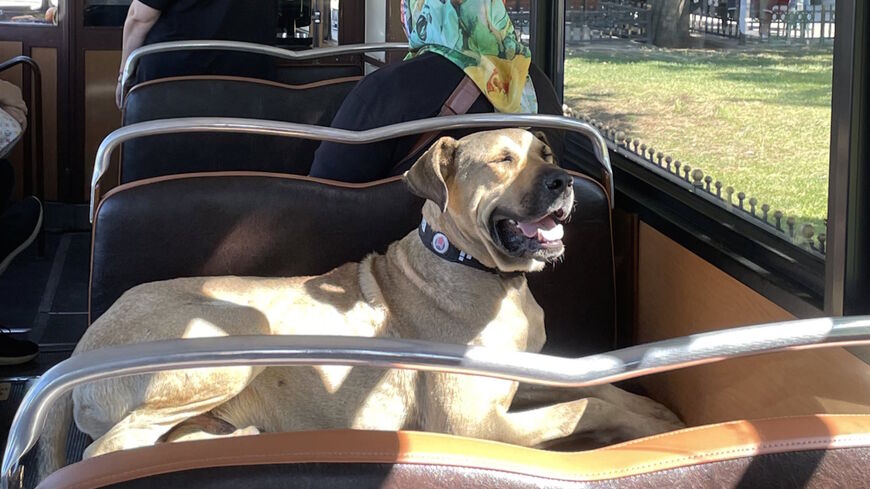 Images of Boji, a youthful Anatolian shepherd mix, with his head cocked to one side, reclining on a seat or cuddling with passengers on various modes of public transport in Istanbul are going viral. The peripatetic canine has his own Twitter account, netting 50,000 plus followers in under a month, as well as an Instagram feed where he catalogs his journeys across the historical megapolis. On a recent day, Boji traveled 30 kilometers, or nearly 20 miles, making his way across the Bosporus and back.

Hi, I'm Boji of Istanbul 🐕 Just like millions of my fellow Istanbulites, I use @municipalityist's public transport services every day. Come and say hi if you spot me on the bus, the metro or the ferry. pic.twitter.com/h5wcs370X1

Boji is among the thousands of street dogs and cats roaming the city. Istanbul is famously hospitable to stray dogs and cats, inspiring documentaries including the heartwarming “Kedi” or “Cat.”

Boji is formally registered by the Istanbul Metropolitan Municipality, as can be observed by the large green plastic tag affixed to his ear. The tag and a microchip allow the municipality to track him and offers proof that he’s been fixed and regularly vaccinated against rabies and hence poses no threat.

Duly assured commuters in the city of 16 million who run into Boji frolic and snap photos and selfies with him.

The municipality runs the animal’s social media accounts, ostensibly in order to promote the use of public transport, protection of the environment and the observation of public safety rules. In one shot, for example, Boji is seen at a subway station waiting for a train. “For safety reasons I never cross the yellow line. Nor should you,” he counsels in the tweet.

However, it didn’t take long for his account managers to rob him of his innocence. In an Oct. 2 tweet, Boji thanked Istanbul Mayor Ekrem Imamoglu for following him. In another, he posted a video of Imamoglu walking on an escalator in the Istanbul metro. “Are you looking for me in the metro, my mayor?” Boji asks.

Unsurprisingly, the municipality has come under attack for “using” Boji for its own public relations. Critics claim the municipality is endangering public safety by allowing him to wander free. One video shows Boji tugging at a male passenger’s arm. He’s being playful. Detractors claim Boji was being aggressive.

It’s no secret that Imamoglu, who captured Istanbul from the ruling Justice and Development Party in the 2019 municipal elections — has his eye on bigger prizes. The media-savvy former businessman is working hard to win hearts and minds in the run-up to parliamentary and presidential elections that are due to be held in 2023. The chairman of his main opposition Republican People’s Party, Kemal Kilicdaroglu, is said to be wary of Imamoglu’s ambitious streak and is weighing a presidential run himself.

Whatever the outcome, in today’s Turkey, projecting an animal-friendly image doesn’t hurt.

It's called Pit Pit Seker, and according to Erdogan, it “is very interested in current affairs.”