The Eastern patriarchs met in Damascus on June 8 to discuss the Christians’ situation in the region, following coordinating efforts between Lebanese Maronite Patriarch Bechara al-Rai and the Vatican, and Greek Orthodox Patriarch John X Yazigi and Moscow. 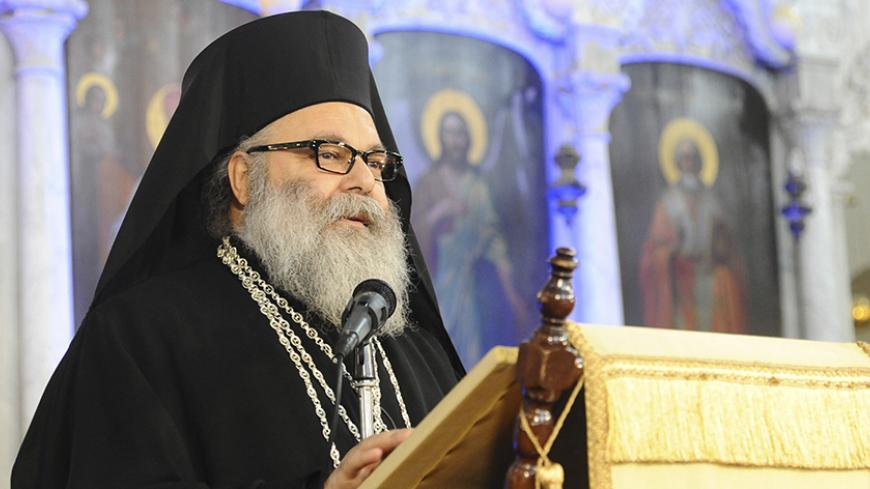 Greek Orthodox Patriarch John X Yazigi delivers a speech at a ceremony to pray for peace, during a Christmas mass at Al-Maryamyeh Church in Damascus, Dec. 25, 2013. - REUTERS/SANA/Handout via Reuters

BEIRUT — Lebanon has been witnessing activities by the Catholic and Orthodox churches. As the papal envoy to Lebanon, Cardinal Dominique Mamberti, was meeting with Lebanese officials and politicians during his visit to Beirut on May 29, preparations were ongoing for the annual meeting of Eastern patriarchs in Damascus on June 8, at the invitation of the Greek Orthodox Patriarch John X Yazigi.

There doesn’t seem to be any direct link between the two events, but the same issues were discussed at both. The meeting of the Eastern patriarchs was held at the seat of the Greek Orthodox Patriarchate in the Christian neighborhood of Bab Tuma (Thomas' Gate) in the heart of Damascus. (This neighborhood owes its name to Saint Thomas, one of the 12 apostles, who passed by Damascus.) The agenda of this ecclesial meeting included the situation of Christians in the region, the challenges they face and the future of the Christian minorities in Syria and Lebanon.

Remarkably, the patriarchs unanimously accepted the invitation despite the political situation and the dangerous security conditions on the road between Beirut and Damascus.

Gregory III Laham, the patriarch of the Melkite Greek Catholic Church, told Al-Monitor that five patriarchs and a large number of bishops and church officials accepted the invitation of Yazigi. In addition to Yazigi and Laham, the other patriarchs included Syriac Orthodox Patriarch Ignatius Ephrem II, Syriac Catholic Patriarch Ignatius Ephrem Joseph III Younan and Bechara al-Rai, the Maronite patriarch of Antioch and head of the Maronite Church in Lebanon.

According to Laham, the patriarchs promptly accepted the invitation for the annual meeting in Damascus, since the seats of three of them — Laham, Yazigi and Ephrem — are located in the Syrian capital.

Laham said that in light of the dangerous situation afflicting the entire region, the church leaders regularly discuss ways to meet the challenges that Christians in the region face, especially the current immigration of Syria’s Christians — the main reason for Yazigi to call for this year's meeting to be held in Damascus.

However, this event also has political aspects. The patriarchs’ presence in Damascus at this particular time may be seen by the Syrian regime’s opponents as support for the Syrian government by the Eastern churches. Therefore, the church leaders were careful in handling this issue, especially in light of past experiences. On Feb. 9, 2013, Yazigi was enthroned at the Greek Orthodox Patriarchate in Damascus, in the presence of Rai and many other patriarchs. At that time, Lebanese politicians opposing the Syrian regime raised their objection to Rai’s presence at the ceremony in Damascus, considering it a step that could be exploited by the Syrian regime in the political arena and the media.

On Sept. 11, 2014, several Eastern patriarchs attended a conference in Washington on protecting the Christians of the Levant. On the sidelines of this conference, the patriarchs met with US President Barack Obama. The meeting’s agenda caused an uproar in Beirut, because the patriarchs and bishops had told Obama that Syrian President Bashar al-Assad provided protection to the Christians in Syria, in light of the extremism emerging among his opponents. At that time, it was reported that Obama assured the church leaders that he was aware of this, which led Assad's opponents to direct their criticism back to the heads of the Eastern Church.

These past experiences seemed to linger in the minds of the participants of this year's annual meeting. Various ecclesial sources said that the meeting and Rai's visit to Damascus this time would not have a political impact, as no meeting was held with any Syrian officials and the visit was purely for church-related purposes.

Laham said that the meeting’s agenda focused on the Christians’ situation and church-related matters in the region, and did not tackle political issues. However, this does not mean that the meeting was limited to ecclesial affairs, as the Eastern Christians are facing challenges on many levels.

Laham asked, “How do we safeguard our presence? How do we preserve our role? How do we handle the immigration of our Christian children from the countries in the region?” He said that the church leaders in Damascus will try to reach common ground to confront these dangers, to develop joint plans of action to preserve the Christian presence in their countries and to ensure their coexistence with non-Christians.

However, the political aspect of the meeting in Damascus seems to be clear despite Laham’s assertions. Yazigi’s invitation of the Eastern patriarchs to Damascus falls within the scope of coordination between his church and Moscow, and Rai’s visit to the Syrian capital was made possible through coordination efforts between him and the Vatican. Hence, the meeting in Damascus can be seen as an attempt to find another source of protection for the Christians of the region.

However, providing protection to the Christians from extremists is a challenge. The meeting in Damascus coincided with the first anniversary of the displacement of Christians from Mosul, the Ninevah plains and several villages in Iraq, following the invasion of the Islamic State.