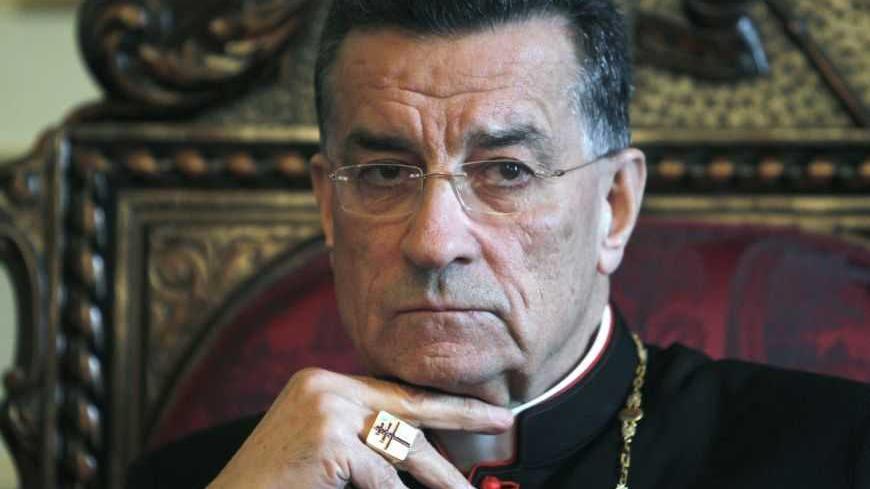 Maronite Patriarch Bechara al-Rai's surprise visit to Syria on the occasion of the appointment of Greek Orthodox Patriarch John X al-Yaziji, which occurred in the patriarchate's headquarters in Damascus, caused a lot of clamor in Lebanon.

This visit was the first of its kind since the two countries gained independence in 1943, and broke a long history of estrangement between the Maronite Patriarchate — based in Bkerke in Mount Lebanon — and the successive ruling authorities in Damascus.

Previously, former Patriarch Nasrallah Sfeir had insisted on refusing all invitations extended to him to undertake such a visit, which the authorities in Damascus had desperately wanted during various periods of the Syrian army's presence in Lebanon. This was a long period that lasted more than 30 years. During this time, former Syrian President Hafez al-Assad, and later his son Bashar, had on multiple occasions called for this visit for political and spiritual "coverage." Such a visit would bring about reconciliation with the Maronite Patriarchate, which considered itself — and likewise was considered by the world — to be the historical guardian of Lebanese sovereignty.

Yet Sfeir, the stubborn and elderly former patriarch, insisted on ignoring the calls and promises of making the two hour trip from Bkerke to the Syrian capital. He refused to make the trip even for religious occasions, such as when Pope John Paul II visited Damascus in 2001. This was despite the fact that the Maronite Church follows the Vatican's doctrine.

On one rare occasion, Sfeir — who had supported the Lebanese opposition for more than 15 years — expressed his views in a notable and stinging manner. At Beirut's airport, and as he was returning from an extensive tour of Lebanese diaspora communities, he was asked: "Will you visit the Muhajireen Palace in Damascus?" Smiling, he responded: "Where is this Muhajireen Palace?" This is with the knowledge that the Syrian president's headquarters were incredibly well-known within Lebanon.

Rai ended the impasse and broke with tradition at the same time. This clamor in Lebanon is also due to the fact that the local head of the church — who months ago became a cardinal and always takes unexpected positions that ignite debate — expressed his desire to visit Syria directly after being elected. This sparked discrete opposition among those in his sect who rallied around the March 14 coalition, a bloc that opposed the Syrian regime and its ally in Lebanon, Hezbollah. This opposition quickly became public, particularly after Rai visited Paris last year and met with former French President Nicolas Sarkozy and said that the current regime in Syria was "the most democratic in the Arab world." Regarding the uproar that this comment caused within political circles — which reached the level of leaders such as Samir Geagea, head of the Lebanese Forces Party — Rai clarified that he intended to say that the secular Syrian regime was the most tolerant towards Christians. He stressed that his statements had been distorted.

However, Rai — who ironically was elected on March 15, 2011, when the events in Daraa were breaking out and the fuse was lit for the revolution and the conflicts that have been seen in Syria for two years — declared his desire to visit Syria right after the results of the bishops' ballot to elect a new patriarch were announced. He also announced his line [of reasoning] and technique, which differ completely from the previous reasoning and technique pursued by the Maronite Patriarchate.

With the passage of time, positions and stances within the sect have clearly shifted. This group — which had allied with Hezbollah (and thus with the Syrian regime) and was primarily represented by the Free Patriotic Movement, led by Gen. Michel Aoun — found itself close to the patriarchate and defended the visit. At the same time, Christians from the March 14 Coalition began to openly object because of the circumstances, with their main representation being found in the Lebanese Forces and Ketaeb parties.

Rai was able to rally the main, and sometimes quarreling, Maronite leaders around a concept for the parliamentary elections law whereby everyone elects members of their own sect to be their representatives in parliament. Yet, despite this, there is a group of Christians from the March 14 coalition who continue to declare in their private and public meetings that the patriarch is biased toward the idea of an "alliance of minorities” in the region, in direct contradiction to principles of “coexistence” between Christians and Muslims.

As soon as news of the visit was made public — which had been planned with great care to keep it out of the lime light — social media sites, particularly Facebook, were filled with criticisms of Rai. Some of these were particularly harsh, like those from the supporters of the powerful March 14 coalition in support of the Syrian revolution as an extension of the Beirut Spring of 2005 and the Cedar Revolution. Politicians then criticized the media, saying that it exposed Christians to danger in the midst of armed conflict in Syria. They talked about the meeting between President Assad and the patriarch in the way it gives the regime incentive to confront the revolution. President Michel Suleiman announced his support for the visit, explaining that Rai realized what he was doing as a church official whose responsibilities go beyond the borders of Lebanon.

The church responded to critics through Al-Monitor, saying that the  Maronite Patriarch is directed by the Vatican to communicate with Eastern churches from Cyprus to India. This has given him special “apostolic exhortation.” He attended the inauguration of the new Coptic Pope Tawadros II in Egypt regardless of the ruling Muslim Brotherhood. He will attend the inauguration next March in Baghdad of the new Syriac Patriarch Ignatius Joseph III Yonan. If there were an inauguration ceremony for a patriarch in Jerusalem, he would have attended it as well, regardless of the authorities there. Therefore, any talk about the political implications of the Maronite Patriarch’s visit to Syria is meaningless. There is a Maronite congregation in Syria that stretches from Damascus to Aleppo, as well as others that cannot be reached due to the security situation. There is no doubt that Rai will visit them all as soon as possible.

The patriarch contacted the Syrian ambassador to Lebanon, Ali Abdel Karim Ali, during the visit, telling him that he would not meet with any Syrian officials so as to keep the trip strictly related to church affairs and to avoid any misconceptions of his intentions.