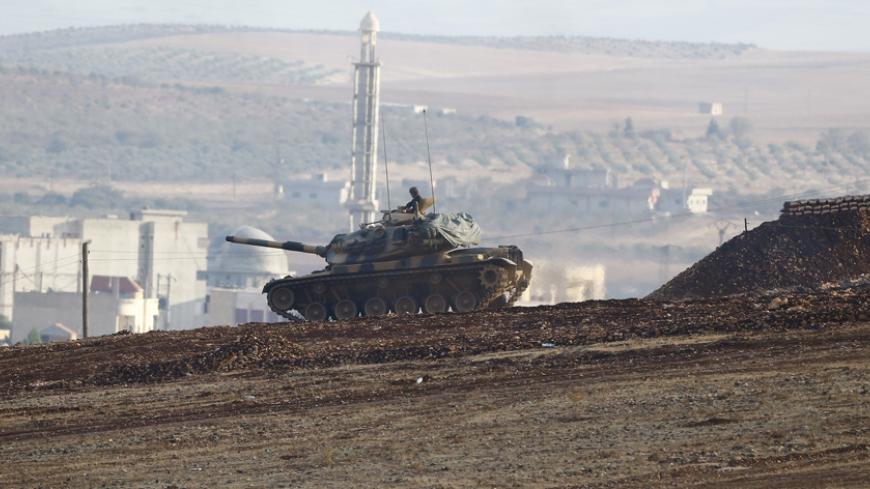 A Turkish army tank takes position near the Mursitpinar border crossing on the Turkish-Syrian border in the southeastern Turkish town of Suruc, in Sanliurfa province, Oct. 18, 2014. - REUTERS/Kai Pfaffenbach

Although Turkey has long been implicated in the depths of the Syrian crisis, the Turkish public is newly anxious over claims that the Turkish Armed Forces are preparing to invade Syria to set up a buffer zone, following the fall of Idlib in late March to the Jabhat al-Nusra-led Army of Conquest.

Amid widespread speculation that the government will declare war so it can cancel the upcoming legislative elections, Gursel Tekin, secretary-general of the main opposition Republican People’s Party (CHP), said on May 7, “Turkey will enter Syria with a military operation tonight or Friday.” Tekin claimed he had been tipped off by a reputable source and added, “I am calling on the prime minister. Please get up and say, ‘There is no such madness. That is a baseless claim. Deny what I said.’”

The government remained silent for hours, allowing Tekin's accusation to generate even more excitement and speculation. The war agenda naturally found its place in election campaigns. Selahattin Demirtas, co-chair of the pro-Kurdish People's Democracy Party (HDP), told a gathering in Tunceli that President Recep Tayyip Erdogan will do everything possible to take Turkey to war with Syria.

Ultimately, it was not the president or the prime minister who denied Tekin’s assertions, but Minister of Energy Taner Yildiz, while being persistently questioned by reporters. “Let him disclose his sources,” Yildiz said. “We suggest he should review his source.” It wasn’t enough, however, to temper the fears that Erdogan might go to war if he thinks he won't get the 400 parliamentary seats he so covets.

Even before Tekin issued his prediction, other developments were fueling such fears. The possibility of Turkey becoming a party to the Syrian civil war was also being driven by eyewitness reports that weapons financed by Saudi Arabia and foreign militants were entering Syria from Turkey and that Turkish units were deploying along the border.

According to information reaching Al-Monitor, illegal passages monitored by the Turkish army at the Hatay villages of Guvecci, Kuyubasi, Hacipasa, Besaslan, Kusakli and Bukulmez had been used for the transfers, which intensified clashes at Idlib and Jisr al-Shughur. Does all this activity presage Turkey entering a war that it is already a party to as a proxy sponsor?

A military source along Hatay’s border, where the massing of Turkish troops is visible, told Al-Monitor on condition of anonymity that there are no preparations for a cross-border operation. About the situation at Yayladag-Altinozu, the site of constant heavy commercial truck traffic into Syria, the source said, “We know nothing about a military operation. There is no such preparation. The only unusual activity is the digging of ditches to prevent the smuggling of cars stolen in Turkey to Syria following a surge of car thefts in Turkey. If there had been preparations for a military operation, would we be digging ditches to impede our own movements?”

Murat Ozcelik, CHP deputy chairman and former undersecretary-general for public security, told Al-Monitor, “Especially President Erdogan may have the intention to send our army into the Syrian crisis. We know there has been pressure on the army for a long time. After we all learned what they discussed at the Foreign Ministry about the Tomb of Suleiman Shah from leaked voice recordings, we have become sensitive to any unusual developments. It is about deciphering such intentions after hearing rumors. But we can’t say that our army is preparing to start a war in Syria.”

CHP deputy Mevlut Dudu, electioneering in Hatay, told Al-Monitor, “I didn’t witness anything unusual. But people are afraid there will be war. They are already disturbed by clashes, now they are truly worried about news of a pending war.”

Mehmet Ali Edipoglu, CHP parliamentary foreign relations committee member, said, “There have been military movements toward the border for the past two months. Then came the fall of Idlib. That war was 15 kilometers [9 miles] from our border. Of course there is a possibility of Turkey entering the war in Syria. The border from Yayladag to Hacipasa is full of our soldiers. If the army gets the order, it will enter. But I think, instead of Syria, it is more likely that we will enter Iraq for the Mosul operation. Our army is not happy with our Syria policy. The soldiers are very uneasy about this. I don’t think that such a war is likely. It is not simple and easy.”

It is no secret that Turkey has built momentum with the Saudis if not to enter Syria now, then to galvanize a proxy war that in the long term could be even more perilous. After meetings with Saudi King Salman bin Abdul-Aziz Al Saud during a visit to Riyadh Feb. 28-March 2, Erdogan had told journalists that they had agreed to boost support to the Syrian opposition to allow it to produce results.

The agreement stipulated that in return for Turkey’s support of the Saudi operation against Yemen, the two countries would join forces against the Syrian regime and form a bloc to counter Iranian influence in the region. Given the Saudi-Turkish agreement, the surge in activity along the Turkish-Syrian border cannot be a coincidence. The fall of Idlib followed palpable new military activity. According to one claim, developments in Syria are being managed from the Antakya Operations Room under the control of US and Turkish intelligence officials.

The CHP's Edipoglu shared information about this with Al-Monitor, stating, “It is true that the war is coordinated from here. The Antakya Operations Room doesn’t work out of a fixed location. Sometimes they meet in hotels. We warned our officials about this. We now hear that these meetings are held in a building guarded by intelligence services. It is possible to say that they are operating from multiple locations.” Meanwhile, the South Operations Room, in Jordan, is responsible for the southern front.

Turkey’s long-standing demand for a buffer or security zone in Syria returned to the agenda following an increase in military support to the northern front. The Syrian National Coalition (SNC), with Turkey onboard, approached the UN Security Council in late April with a request to declare part of Syria a no-fly zone.

Existence of the Saudi-Turkish partnership was exposed by the use of TOW anti-tank missiles against regime forces at Idlib and confirmed by the Syrian opposition. Khalid Khoja, head of the SNC, visiting Washington May 7 to seek support from the Barack Obama administration, told the Turkish daily Hurriyet about the simultaneous increase in weapons assistance to the southern front, supported by Saudi Arabia, and to the northern front, supported by Turkey. Khoja said, “Increased weapons assistance was noted in the recent clashes. Assad is retreating.” Khoja​, who had also met April 30 with Secretary of State John Kerry and Pentagon officials, said a critical juncture has been passed, and that after Idlib, the opposition's goal is to set up safe zones and then lay siege to Damascus.

That these developments are taking place on the eve of third-round, low-level meetings in Geneva is also noteworthy. The warring parties, as they have tried for the past four years, want to arrive at the negotiating table with strong hands. With the Geneva meeting approaching, the Syrian regime had made major gains on several fronts, notably, in Aleppo. The Saudi-Turkish partnership has thus upended an equation that was beginning to favor Syrian President Bashar al-Assad.

Beyond such calculations, will the alleged efforts succeed in dragging Turkey into a military adventure? Many people following developments believe that in light of the mechanisms imposing moderation and oversight in Turkey being in disarray, only tactical objections by the military can rule out such an eventuality. The objections of the military can best be summed up as follows: If Turkey enters, it can’t exit. The war will spread to the entire region.