While the Syrian regime looks increasingly precarious, many Turks worry about the burgeoning refugee camps and wish that the Turkish government would move them into a buffer zone on the Syrian side of the border. On site at the camps, Tulin Daloglu shares refugee stories and the perspectives of uneasy Turks. 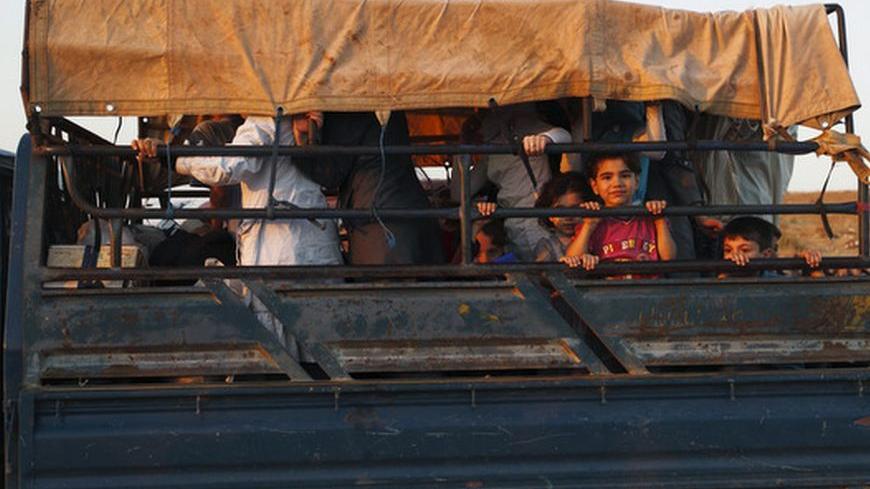 Fleeing civilians arrive at an unofficial border crossing with Turkey in the northern Syrian province of Idlib August 6, 2012. - REUTERS/Zohra Bensemra

HATAY, Turkey — While the Assad regime in Syria looks increasingly precarious, many Turks, especially those who live near the border with Syria, are less than enthusiastic about Turkey’s unequivocal support for the Syrian opposition.

Hatay province’s Alevi population, whose religious faith is similar but not identical to that of Syria’s minority Alawites, fears that Syrian Alawites’ lives will be at risk once President Bashar al-Assad falls and that in the undetermined amount of time it takes for him to go, radicals will benefit most from the chaotic environment.

Yildiz Garbi, a long-time criminal lawyer in Hatay, told Al-Monitor that the chatter in the border town is that Sunni Syrians believe “killing seven Alevis [or Alawites] will secure them a place in heaven.”

Many local residents also worry about the nature of those filling the burgeoning refugee camps and wish that the Turkish government would move them into a buffer zone on the other side of the border.

“These border camps make us worry,” Hasan Ozgun, the art director of Ehliddar in Antakya, the only Arabic-speaking theater in Turkey, told Al-Monitor. “We are suspicious of the activities inside these camps and we perceive them as targeting our harmony and peace.”

A visit last weekend (August 10-11) to refugee camps at Yayladag and Oncupinar yielded many stories of Syrian oppression — and ambiguous reports about militant activity and Turkish provision of weapons.

“As the events started to take place all over Syria, I also went onto the street to seek freedom,” said Mehmet Abdullah as he was walking into the camp at Yayladag with his family. Nearly 10,500 Syrians, about one-third of them ethnic Turkmens, have found shelter there, escaping violence in the Mediterranean Alawite stronghold of Latakia.

“They arrested me and put me in prison,” he said. “I’ve seen a lot of bad things. I’ve been tortured, witnessed the death of others. The opposition rescued and set us free.”

Mehmet initially did not take his family with him. After failing to find safety in nearby villages, however, he decided to move them to Turkey.

“We were hearing the shootings every night,” he said. “So I brought [my family] to Turkey,” he sighed, his eyes cast down.

With his children, Resat (four), Sirin (seven) and Sidra (nine) safe, Mehmet said, “I am here for tonight. Tomorrow I am going back to fight.” Mehmet told Al-Monitor that since leaving Syria five months ago, he has returned periodically to fight for ten or more days against the Syrian army and then come back to Yayladag to rest.

He denied receiving weapons or ammunition from Turkey but acknowledged that “Turkish soldiers help us [cross the border] … We want Turkey to give us weapons,” he said.

“Don’t ask me to prove how, but I know Turkey is also providing us with weapons, and all kinds of support,” he told Al-Monitor. He said a large network of people secretly does business with Turkish intelligence and other intelligence services to bring down the Assad regime. “He can’t resist too long,” Dhbam said, referring to Assad. “Inshallah, he will be no longer in a month or two. But wait for what will happen after the Eid [the feast marking the end of Ramadan on August 19].”

Dhbam said he has been in Turkey for over a year. “I defected long ago when they asked me to shoot at my own family,” he said. “I first stole five Kalashnikovs from the police station … and found a way to join the opposition escaping to Turkey.”

“My job is to carry the wounded from Syria to the state hospitals here,” he said. “I went in at six this morning and brought four wounded opposition members. As I neared the border, Syrian soldiers started to shoot at us. A Turkish soldier gave us cover and shot back in that direction.”

For Dhbam, the war has brought a new sense of mission.

“We grew up being told ‘Don’t speak about politics, the walls have ears to hear you,’ he said as we chatted at a pastry shop in Antakya. “I don’t want to live in fear any longer. For those who claim it is the US or Israel behind these events, they have no clue about Assad’s brutal regime. There are more than enough murders conducted by that regime, and that era needs to come to an end.”

Among the locals in Hatay, however, the debate is less over the merits of the Assad regime than the impact the Syrian conflict is having here.

“We were expecting the buffer zone for the escaping Syrians [to be] within their country,” Mehmet Ali Edipoglu, a member of parliament from the chief opposition party in Turkey, the CHP, told Al-Monitor. “However, the [Turkish] government first turned Hatay into a buffer zone. Next, it will be Kilis, Gaziantep and Islahiye,” he said, referring to other places where the Turkish government has set up refugee camps. “Right now, there are people here who claim to be Syrians, but they’re actually from Afghanistan, Libya, Chechnya and African countries that have ties to al-Qaeda.”

Edipoglu added that on July 20, at 1 a.m., about 30 busses crossed downtown Antakya toward the refugee camp and that the electricity had been cut. “They probably carried people or weapons to the border with Syria,” he said.

Tensions have risen in Hatay since the Syrian influx began and it feels as if the town sits on a hand grenade waiting for the pin to be pulled.

A police officer told Al-Monitor that burglaries have increased by 50% in the last two months. Others complain about Syrians with thick beards and eerie looks.

“Since they arrived, we are not able to enjoy our parks,” said a housewife who asked to be identified only as Aysel S. “They abuse women on the street, and there is nothing we can do until something really happens.”

At the heart of the Turkish Alevi community’s concern is accusatory rhetoric by Turkish Prime Minister Recep Tayyip Erdogan suggesting that members of their faith are somehow responsible for the bloodshed in Syria.

“Can you believe what he says to Kilicdaroglu? Is it normal to provoke people against a person based on his faith?” said Hasip Yigitoglu, a businessman who owned a factory producing industrial lubricants in Aleppo until the crisis started over a year ago. He was referring to Kemal Kilicdaroglu, the head of CHP, who has criticized the ruling AKP’s Syria policy and urged the government to refrain from making Turkey a direct party in the conflict.

Erdogan claimed that Kilicdaroglu is supporting Assad because the Turkish politician is an Alevi.

“The prime minister is trying to create a Sunni bloc with such rhetoric,” Yigitoglu told Al-Monitor.

Mahmut Sonmez, head of the Hatay-Syria Friendship Association, urged the Turkish government to close the border camps and move the refugees into a buffer zone inside Syrian territory.

“Tomorrow, they will turn against us, and threaten our peace,” he said. “The Erdogan government should immediately close these camps, and stop aiding their militant activities in Syria.” Otherwise, he warned, “it will be a miracle not to expect this sectarian fire to cross into our borders and set the region on fire.”

Tulin Daloglu is a journalist and foreign-policy analyst based in Ankara, Turkey.