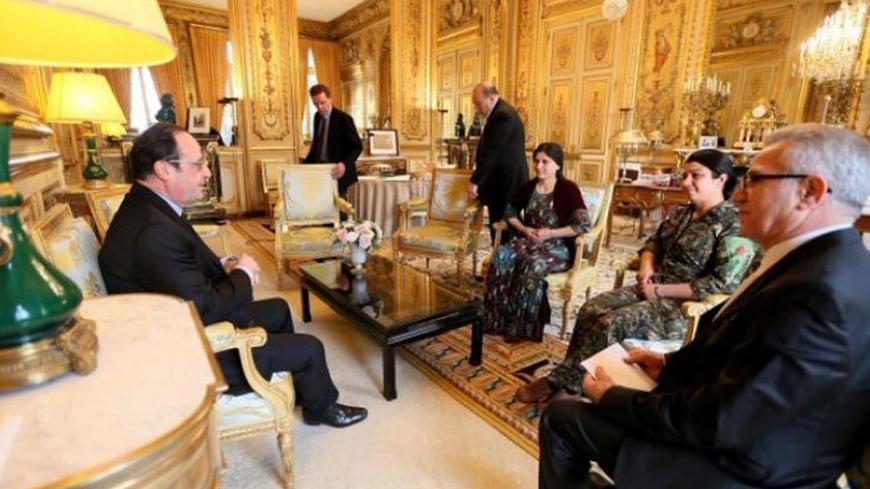 French President Francois Hollande has initiated a diplomatic move strongly challenging President Recep Tayyip Erdogan, who considers the Syrian Kurds' People's Protection Units (YPG) in the self-styled Rojava canton to be a terror organization and who is seriously disturbed by the US military assistance to the Kurds in their fight against the Islamic State (IS). On Feb. 8 at the Elysee Palace, Hollande hosted Asya Abdullah, the co-chair of the Democratic Union Party (PYD); Nesrin Abdullah, the commander of the YPJ (YPG’s women units); and Khaled Issa, the PYD representative in France. The meeting was held at the personal and official invitation of Hollande. Aysa Abdullah attended the meeting in her traditional Kurdish costume and Nesrin Abdullah in her combat uniform. Accounts differ, but the two Kurdish women reportedly flew from Erbil to Paris in a private plane sent by France or on a scheduled flight with all expenses paid.

Even more significant was the dissemination of photographs of the meeting that put on record recognition of the Kurdish identity, Kurdish political entity and Kurdish defense forces by French leaders through the website of the Elysee Palace.

One of the major intended targets of this message by Hollande is undoubtedly Ankara. PYD representatives told Al-Monitor that the message is mostly aimed at Turkey. The visit has thus become the most momentous indicator of the legitimacy Rojava is gaining in the international arena. PYD Co-Chair Salih Muslim previously held meetings with Western officials, but they were not as notable or symbolic.

Guns from the West, corridor from Turkey

PYD officials told Al-Monitor that the Kurdish representatives recounted the situation in Rojava and asked for advanced weapons to fully eliminate the IS threat. Kurds are mostly seeking anti-tank weapons of the type Germany supplied to the Kurdistan Regional Government. Hollande said support for the Kurds in their anti-IS struggle will continue. Issa said of the Elysee meeting: “We explained that we are proposing our Rojava model for all of Syria. We emphasized that international support against the IS threat must continue.”

Zuhat Kobani, the PYD foreign relations official, also spoke to Al-Monitor about the visit: “The visit was made at the official invitation of the French president. All facilities were provided for the delegation to come to Paris. Our representatives told Hollande that the Kobani victory is not a success only for the Kurds but for all of Syria. They told him, ‘We are also fighting against those who attacked Charlie Hebdo. Our resistance is your resistance. We must move this struggle forward. The YPG and the PYD are your friendly forces.’

“They discussed how to jointly fight IS. International assistance is badly need for the reconstruction of Kobani, which was destroyed in the war. We want Turkey to open a corridor to Kobani. This corridor is vital to bring in supplies for reconstruction and international teams that will come to work on those projects in Kobani. We asked for his help to realize our requests. The French president was positive and stressed that their support will continue. France wants to lead the war against IS and is seeking ways to cooperate with Rojava actors in that framework.”

When asked whether there was discussion on expanding the anti-IS war to outside of Rojava or whether the Kurds will participate in the struggle against the Damascus regime, Kobani replied: “We explained our views on Syria. Our resistance is the resistance of all freedom-seeking Syrian groups. Our goal is to democratize all of Syria. We want a decentralized Syria. We have proven ourselves militarily and politically. We put together a democratic governance model incorporating all political, ethnic and religious groups. We want this system to prevail in all of Syria. It is not possible to put this system in place under the current dictatorship.”

War will expand, but how?

My next question was: If it is impossible to move forward with the current regime, would this mean that Rojava forces would adopt an offensive posture, abandoning their defensive policy of trying to keep the war away from their territory?

Kobani answered: “We will go into alliance with free Syrian forces that share our objective. We haven’t given up our legitimate self-defense, but if forces like Burkan el-Firat [Euphrates Volcano] attached to the Free Syrian Army [FSA] are attacked, we will play our role and help them. If regime forces again attack like they did at Hasakah, we will respond. We already have had several clashes with regime forces at Aleppo.”

When reminded that the FSA had lost its effectiveness in the field, and that in addition to IS, organizations such as Jabhat al-Nusra, the Army of Islam and Ahrar al-Sham were becoming prominent, Kobani said: “We are talking of cooperation with forces that accept the model we created. The organizations you listed are actually fraternal brothers of IS. Partnership with them is not possible. We had made an agreement with them when Serekaniye was attacked but they immediately exploited this agreement and tried to dominate the region. This is when the YPG expelled them. Our experience shows there can be no agreement with those groups. We are now trying to implement an agreement at Afrin similar to our alliance with Burkan el-Firat.”

Kobani said the YPG and YPJ will be having other meetings in Europe and that an expanded PYD delegation, including Asya Abdullah, is planning to visit Washington. The United States had earlier denied a visa to Muslim, reportedly because some of his statements had disturbed Washington. But PYD sources said the United States has already issued a visa to PYD Europe representative Sinem Muhammed, and they are now expecting visas for the other members of the delegation.

European countries are closely following the model that is now operational at Rojava. Former French Foreign Minister Bernard Kouchner and Gregor Gysi, a leader of the German party The Left, visited the Jazeera canton in November 2014. Around the same time, a delegation of the European Parliament also visited the area. There is definitely a growing interest in Rojava after the defeat of IS at Kobani.

Wished Erdogan had done it before Hollande

In contrast with the spectacular interest France showed the Rojava actors, the Turkish government stuck to its policy of discrediting the Kobani resistance. The negative language used by Erdogan, who branded the PYD as a terror organization and equated it with IS, is now reflected in official statements from other Turkish bodies, led by the Turkish armed forces.

Zuhat Kobani, referring to Turkey’s supportive position of IS against the Kurdish resistance while there is growing European support for the Kurds, said: “The reception accorded to our delegation in their traditional costumes and military uniform at the Elysee Palace was an open message of the acceptance of the PYD, YPG and YPJ. We wish that Erdogan had done this before Hollande and had received the Kurds. As a neighbor, that is what we expected from Turkey. We hope Turkey will learn a lesson now.”

The photos from the Elysee Palace were yet more signs of how deep Turkey’s regional isolation has become. Ankara was in harmony with France when cracks appeared in Turkey's relations with the United States about Syria after 2013. A few hours after US President Barack Obama listened to Erdogan’s objections, US military planes delivered weapons to Kobani and the bombing campaign against IS began as the unmistakable harbinger of the new Middle East policy of Washington “despite Ankara.” Hollande’s gesture to the Kurds will expedite the process of the legitimization of the Kurds. There are no signs that Erdogan and his team are going to reverse their policy of trying to eliminate the Rojava actors. Only recently, the Turkish Foreign Ministry reaffirmed its position that the PYD is a terrorist organization.