What does Hezbollah mean by 'painful concessions' in Syria? 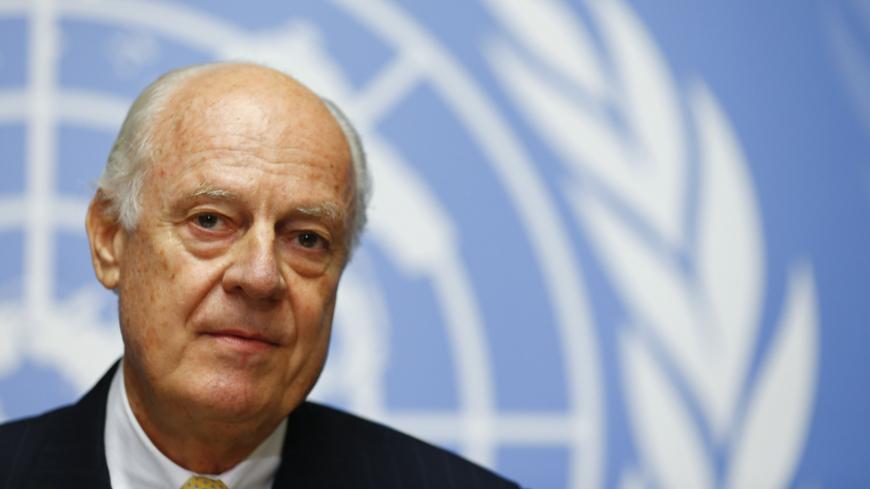 De Mistura is visiting Lebanon, Russia, Turkey, Iran and other regional countries during what he described as a “very crucial period” for the Syrian political process.

According to Al-Monitor columnist Jean Aziz, “painful concessions refer to the [Syrian] regime’s acknowledgment of the opposition as a partner in governing and acknowledgement by the opposition and those supporting it that the current regime is their partner in Syria.”

In an Oct. 13 speech, Turkish President Recep Tayyip Erdogan lashed out at Iranian Supreme Leader Ayatollah Ali Khamenei, asking, “What kind of religious leader [Khamenei] is this [who] says ‘[Syrian President Bashar al-] Assad is the only one challenging Israel’? Assad didn’t shoot a bullet at Israel. Assad killed 250,000, and you’re still supporting him, sending him money and arms.”

Ali Hashem writes that Erdogan’s remarks were a setback for what was considered to be a mild warming trend following the Turkish president’s visit to Tehran in January.

An Iranian official told Hashem, “The death of 250,000 in Syria was caused by nations that back the terrorists in Syria. Turkey is one of those states, and it has full responsibility for the situation today. Mr. Erdogan personally knows that Iran is innocent. Iran is helping a legitimate government restore control over its land and fight terrorists coming from around the globe to kill and terrorize civilians. ... This [speech] is another indication that Ankara isn’t really serious about cooperating to end the crisis in Syria. It’s such a shame that an essential country in the region is still not determined to fight terrorism, is hesitant to help its Kurdish neighbors in any way and at the same time is attacking those who warned of this end from the beginning.”

Despite Erdogan’s comments, and Iran’s off-the-record frustration with Turkey’s role in Syria, as reported by Hashem, Iranian Deputy Foreign Minister Hossein Amir Abdollahian took the diplomatic high road, saying on Oct. 24, “Iran welcomes any bilateral and regional cooperation with Turkey, Saudi Arabia, Egypt and other Muslim countries in the region in a genuine and effective battle against terrorism and extremism.”

Erdogan points out US "mistake"

Criticizing the supreme leader of Iran may be one thing, but Erdogan also could not resist taking a swipe at the United States.

Erdogan’s remark on Oct. 22 that “the mistake can now be seen,” after a stray pallet from a US airdrop to Syrian Kurdish forces fell into IS hands, was taken as yet another sign, as if yet another sign as needed, that the United States and Turkey differ on the urgency of defeating the Islamic State (IS).

Semih Idiz reports that Erdogan’s decision to allow Iraqi Kurdish peshmerga forces passage to Syria has “caused controversy in Turkey. The military in particular is said to be unhappy about a corridor being opened for the peshmerga, especially after the recent agreement reached in Erbil, the capital of Iraqi Kurdistan, between various Kurdish groups to join forces against IS. Sources close to the military told Al-Monitor that the Turkish armed forces continue to have a severe allergy to any military cooperation with Kurds, fearing that the PYD [Syrian Kurdish Democratic Union Party] and the PKK [Kurdistan Workers Party] will ultimately benefit from it. The idea of an autonomous Kurdish entity along Turkey’s long border with Syria continues to also be anathema to the Turkish military.”

Both the United States and Turkey consider the PKK a terrorist organization.

Amberin Zaman writes that Erdogan’s approach to the US and international appeals to support Syrian Kurdish forces in the battle against IS over Kobani has been unnecessarily costly for Turkey:

“Turkey could have led the effort to support anti-IS forces in Kobani by letting arms and fighters through its borders weeks ago. This would have bolstered the peace process between Turkey and its own Kurds, while averting the public relations disaster caused by images of Turkish tanks and soldiers looking on as the Syrian Kurds battled IS in Kobani, thereby reinforcing claims that 'Turkey supports IS.'”

Zaman explains how the PYD outmaneuvered Erdogan and boxed in Iraqi Kurdistan Region President Massoud Barzani (who also emerges as a possible winner, at least for now, for sending some peshemerga forces) to gain US and Western support for the PYD and its armed branch, the People’s Protection Units (YPG), in the battle for Kobani:

“The Kurds adeptly used the media and global public opinion — which depicted them as the region’s secular, pro-Western force, a space formerly occupied by Turkey — to draw the US into the battle for Kobani. The battle for Kobani then became a symbol of the contest between IS and the coalition, one that the US could no longer afford to lose. Moreover, the concentration of IS forces around Kobani allowed the US to inflict heavy losses on IS fighters. … Iraqi Kurdish President Massoud Barzani is probably unhappy about US engagement with the PYD/PKK, which he views as rivals. But, unlike Turkey, he has turned the situation to his own advantage by projecting himself as a benevolent leader who has aided fellow Kurds in their time of need.”

Ben Caspit writes that a silent intifada is brewing in Jerusalem. The potential for violence was on display when a Palestinian man from East Jerusalem drove his car into a crowd, killing a 3-month-old child Oct. 22; Israeli police shot the driver. Both Israelis and Palestinians demonstrated in response.

Caspit reports that Israel is seeking to quickly suppress this possible new intifada. He describes the "powder keg" that is Jerusalem, especially because any provocation can go soon be subsumed into the politics of the Temple Mount:

“Radicals from all sides are drawn to Jerusalem like a moth to a flame. On one side of the barricade are radical Jewish movements sanctifying the ascent of Jews for prayers on Temple Mount. On the other side of the barricade are radical Islamists who view the Temple Mount as the Muslim world’s “Holy of Holies” and they would not stand to see Jews in that area. Neither side is really in the right. Everyone sees the issue through their own subjective prism. Each side is yearning for a mega explosion and a massive fireball that they believe will hasten the 'Day of Judgment.' The Muslims believe that on that day God and his prophet Muhammad will scatter the Jews all over and put an end to the Zionist enterprise. Jews, on the other hand, believe that the Messiah will finally arrive and Muslims will be thrown into history’s dumpster. It’s a pity that only the radicals in these volatile places get to speak up, while the silent majority on both sides looks at them helplessly. ...

"Calls have been made in Israel to quickly and harshly suppress this new intifada, no holds barred. Although this demand is justified, its execution, however, is perilous. The situation is a powder keg just waiting to explode all around us at any moment. And when it does, we will all look wistfully at the 'silent intifada.' For the gates of hell to open, all it takes is one unexpected incident on the Temple Mount that will spiral out of control, resulting in a few Palestinian fatalities. Israel understands that perfectly. Abbas, on the other hand, is slightly less apprehensive. In a pugnacious speech he delivered Oct. 17, in which he used harsh and unprecedented terms (as far as he is concerned) to describe Israel and its policy, he called on the Palestinians to rally in the defense of the Temple Mount. Abbas, too, is treading a very fine line here, poking the tiger. The last time this tiger was provoked and went wild, the late PLO leader Yasser Arafat tried riding on its back. We all know how that ended. So does Abbas. No one wants to go back to that ending. If things continue to unfold at the same rate as they do now, this ending will backlash at us, on its own initiative.”