Following the latest Jerusalem terror attack in which a baby girl was killed, calls were being heard in Israel to quickly suppress the "silent intifada," even though one incident on Temple Mount might explode the region. 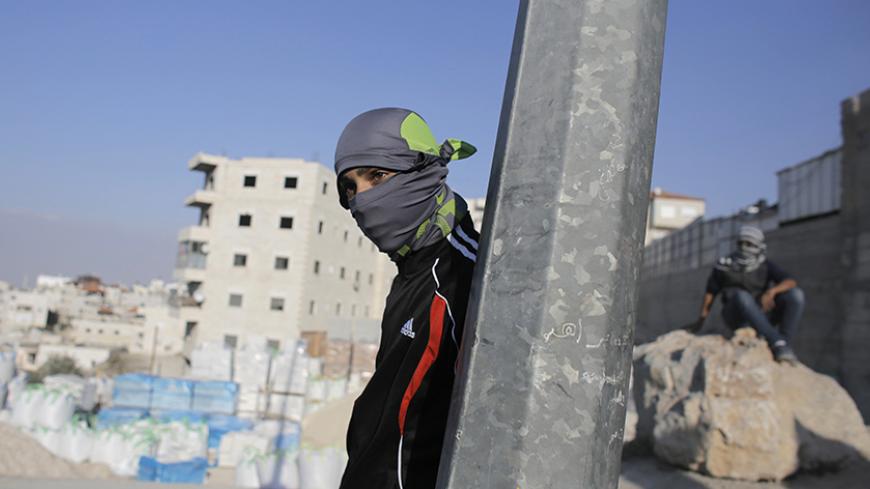 A Palestinian stone-thrower takes cover behind a street pole during clashes with Israeli police in the east Jerusalem neighborhood of Issawiya, Oct. 23, 2014. - REUTERS/Ammar Awad

On Oct. 22, as Jerusalemites were watching reports about the terror rampage in Ottawa, a private car was barreling down toward the light railway station near Ammunition Hill in the Israeli capital. The train pulled up at the station and passengers got off. The car, driven by Abdel Rahman al-Shaludi, 21, from the Silwan neighborhood of East Jerusalem, managed to cross the tracks, dodge the bollards and run over some of the passengers who had just gotten off the train.

Among those run over were Chana and Shmuel Braun, who were carrying their 3-month-old baby girl, Chaya Zissel Braun. Shaludi continued his murderous rampage hitting several other passengers until he slammed the car into a post. He tried opening the door, but it jammed. He then crawled out of the window and attempted to escape. He was shot by two policemen and later died of his wounds.

The baby girl, who came into the world after a series of grueling fertility treatments, later died at the hospital, where seven other casualties were hospitalized, including her mother. Shaludi was a Hamas militant living in a contentious neighborhood in East Jerusalem. Dozens of Jewish families, who (legally) purchased various properties in this densely populated Palestinian neighborhood, have moved in since the end of September. Having taken place in the afternoon of Oct. 22, this incident set a new record in what is now termed the “silent intifada” or “urban intifada” that has been raging in East Jerusalem in recent months. It makes a laughingstock of the efforts by the Jerusalem police to curb it.

On Oct. 23, Israeli Foreign Minister Avigdor Liberman posted the following on his Facebook account: “The terror attacks that took place almost simultaneously yesterday in two different parts of the world — Jerusalem and Ottawa — prove once again that terror is a global epidemic which must be fought against unrelentingly and forcefully. Terrorism,” Liberman continued, “does not stem from construction in Jerusalem, Ottawa, New York, Madrid, London or Mombasa; rather, it stems from the struggle of radical Islam against the Western world.”

Liberman is both right and wrong at the same time. He is right in terms of defining the Islamic terror raging in many parts across the world as a struggle between civilizations, to which Israel is not directly linked. It is neither linked to the rise of the Islamic State or al-Qaeda’s rampage, nor to the Salafist terror in Sinai or other manifestations of Islamic terror around the globe. On the other hand, Liberman is wrong to ignore the auspicious circumstances that Israel has created in East Jerusalem, which fan the fire of extremism and provide oxygen to the constantly burning embers of terror in the world’s most volatile place, to wit, the Temple Mount and East Jerusalem. Liberman knows full well that under any other circumstances — whereby the Israeli government in Jerusalem would have held earnest negotiations with Palestinian Authority President Mahmoud Abbas, or alternatively would have introduced a genuine and bold peace plan before the whole world or at least recognized the Saudi Initiative as a basis for negotiations — it would have been possible to pacify the Palestinian population in the Israeli capital. But there is no such government in Jerusalem. What the city has right now is an intifada — silent or urban. Whatever its name, it is certainly alive and kicking.

There are some 350,000 Palestinians living in East Jerusalem. Their status is different from the rest of the Palestinians living in the West Bank or Gaza Strip. The Palestinians in Jerusalem are bearers of the standard blue Israeli ID card. Although they have the right to vote, they do not enjoy full-fledged citizenship. They profit from the generous benefits of Israel’s social welfare and health care systems, as well as other benefits that their fellow Palestinians from the territories do not have. Yet they feel like second-class citizens. They look around them and see the neglect in their neighborhoods and the rundown infrastructure. At the same time, they also see the ongoing expansion of Jewish settlement in Jerusalem, so they feel disgruntled. The daily riots on Temple Mount, a hub and a magnet to all Palestinian extremists, do not help cool down the atmosphere.

Right now, the situation in Jerusalem is extremely volatile and sensitive. As noted here quite a few times before, the ultimate evil — should it occur — will start here. Radicals from all sides are drawn to Jerusalem like a moth to a flame. On one side of the barricade are radical Jewish movements sanctifying the ascent of Jews for prayers on Temple Mount. On the other side of the barricade are radical Islamists who view the Temple Mount as the Muslim world’s “Holy of Holies” and they would not stand to see Jews in that area. Neither side is really in the right. Everyone sees the issue through their own subjective prism. Each side is yearning for a mega explosion and a massive fireball that they believe will hasten the “Day of Judgment.” The Muslims believe that on that day God and his prophet Muhammad will scatter the Jews all over and put an end to the Zionist enterprise. Jews, on the other hand, believe that the Messiah will finally arrive and Muslims will be thrown into history’s dumpster. It’s a pity that only the radicals in these volatile places get to speak up, while the silent majority on both sides looks at them helplessly.

The light rail in Jerusalem, Mayor Nir Barkat’s flagship project, is seen by the Muslim rioters as the “symbol of Israeli rule” in the city. Designed to pass also through the Arab neighborhoods, it aimed to provide modern transportation services to Arabs from East Jerusalem. For some reason, however, they do not play along. For the past several months, the light rail has been the target of vandalism. Its cars have become a moving target, pelted with stones on a daily basis. The damage that’s been caused to the train and the city is staggering. While it is an expression of Palestinian thanklessness on one hand, it also serves as an arena for cultural, political, religious and diplomatic kerfuffle on the other.

Calls have been made in Israel to quickly and harshly suppress this new intifada, no holds barred. Although this demand is justified, its execution, however, is perilous. The situation is a powder keg just waiting to explode all around us at any moment. And when it does, we will all look wistfully at the “silent intifada.” For the gates of hell to open, all it takes is one unexpected incident on the Temple Mount that will spiral out of control, resulting in a few Palestinian fatalities. Israel understands that perfectly. Abbas, on the other hand, is slightly less apprehensive. In a pugnacious speech he delivered Oct. 17, in which he used harsh and unprecedented terms (as far as he is concerned) to describe Israel and its policy, he called on the Palestinians to rally in the defense of the Temple Mount. Abbas, too, is treading a very fine line here, poking the tiger. The last time this tiger was provoked and went wild, the late PLO leader Yasser Arafat tried riding on its back. We all know how that ended. So does Abbas. No one wants to go back to that ending. If things continue to unfold at the same rate as they do now, this ending will backlash at us, on its own initiative.