Jordan is caught between a rock and a hard place: It has recalled its envoy in reaction to violence outbreaks on the Temple Mount, but still seeks to maintain its strategic ties with Israel. 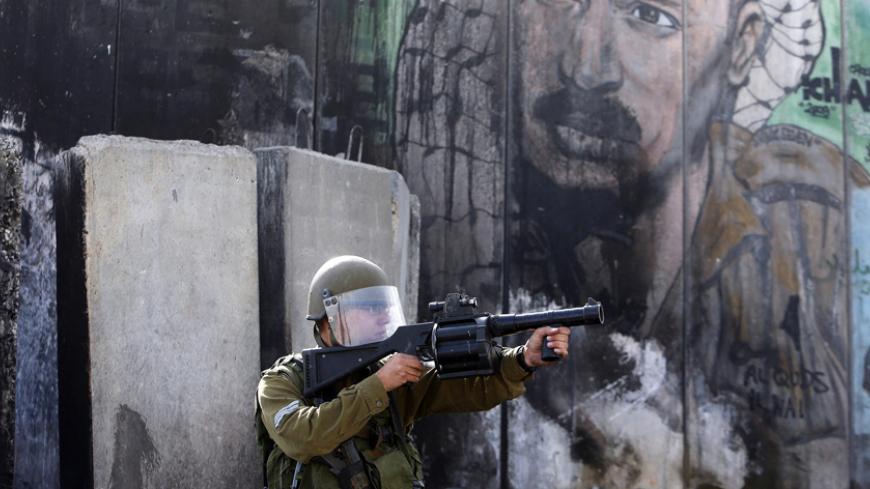 An Israeli soldier points his weapon toward Palestinian protesters during clashes following an anti-Israel demonstration over the recent entry restrictions to the Al-Aqsa Mosque, at the Qalandia checkpoint near the West Bank city of Ramallah, Nov. 2, 2014. - REUTERS/Ammar Awad

The events that unfolded during the first week of November have silenced even the last remaining skeptics who continued to argue that what has been happening in Jerusalem are isolated disturbances, which do not constitute an exception to the ordinary situation. This debate is now over. Almost everyone understands that something is afoot in Jerusalem. One might call it a third intifada, despite the fact that its features and progress are different from to the previous two intifadas. It should also be kept in mind that the first two intifadas were also radically different from each other. The first one was a broad popular uprising, whose weapons of choice were mainly rocks, burning tires and makeshift slingshots, and sometimes knives. The second one was a murderous inferno, consisting of dozens if not hundreds of suicide bombers who blew themselves up amid innocent civilians, until this phenomenon was stopped thanks to Operation Defensive Shield in 2002. There is no reason why the third intifada — if this indeed marks its onset — cannot reinvent itself. To date, its hallmarks have been the use of firecrackers against the security forces as well as "run-over attacks" by vehicles.

The fire that is blazing in East Jerusalem is not about to subside in the near future. This incident could spiral out of control, potentially impacting other volatile fronts in the region, from the Sinai Peninsula to Lebanon, Syria, Iraq and possibly as far as Afghanistan. The greatest fear is that a war of religion will break out, that is to say no longer a territorial or national conflict or the combination of the two. Now it is (radical) Islam pitted against (radical) Jews. Although we are talking about a handful of people on either side, and while the silent majority wants quiet, the problem is that those few extremists dominate the agenda, sweeping with them the public at large.

As was noted here on quite a few occasions, the root of evil has been planted and grown on the Temple Mount, the holiest, most volatile place on earth. What facilitated this situation was a variety of inauspicious conditions and contributory circumstances, such as the kidnapping and murder of the three Jewish teenagers in the Etzion settlement bloc this past June and the subsequent retaliatory murder of Arab youth Mohammed Abu Khdeir on July 2, which was then followed by Operation Protective Edge. All of these events could have been stopped cold in their tracks. They could have remained isolated, not-coordinated and fleeting had the Temple Mount not been inserted into this equation as well.

On Nov. 5, another run-over attack took place in Jerusalem. This time, too — as in the light rail incident of Oct. 22 — an Arab driver from East Jerusalem, blinded by hatred and brainwashed by incitement, went on a rampage with his van, running over passersby and pedestrians, killing a Druze border police officer. He then got out of the vehicle and continued his rampage on foot with a crowbar until he was shot and killed. Meanwhile, the regular disturbances in the neighborhoods of East Jerusalem continue, consisting of firebombs, firecrackers, rocks, arson and vandalism. Inside the Temple Mount, hundreds of self-appointed young "guardians of Islam" get together nightly to plan the riots for the following day. The Israeli police deployed thousands of policemen and border police troops in Jerusalem with the belief that exercising force and demonstrating presence would restore order, which has yet to happen. Yesterday, police sources admitted that force alone could not calm the situation. The situation calls for another kind of solution.

On Nov. 6, an Israeli defense official in Jerusalem told Al-Monitor, "At this time, the situation cannot be resolved with force. For dozens of years, Israel has neglected East Jerusalem. In the past few years our security presence in the Palestinian neighborhoods was next to nothing. We've lost our deterrence. There are neither state symbols nor state presence, so they've gotten used to a kind of neighborhood autonomy and lawlessness. Now, against the background of attempts by radicals on both sides to fight over the Temple Mount, everything blows up and gets out of control. A strong Israeli leadership should have stopped the attempts by radical Jews to change the status quo on the Temple Mount. A sane Islamic leadership would have calmed the radical Islamists who are convinced that the Jews plan to grab the Temple Mount away from the Muslims. But there are no such leaders at this time."

This week, Jordan recalled its ambassador to Tel Aviv for consultations. The situation of King Abdullah of Jordan is highly complicated. On the one hand, the defense relations between Israel and Jordan are one of the mainstays of the Hashemite kingdom's survival strategy. On the other hand, the king has to take care of 1 million Syrian refugees and millions of Palestinians, some of whom live in the densely populated alleyways of the refugee camps. The progress of the Islamic State in the north has also given rise to unrest in his own backyard. What is happening on the Temple Mount is perceived by the Muslim public as an Israeli attempt at the "Judaization of Jerusalem." Abdullah has too many balls to juggle. The problem, however, is that these balls are deadly. He needs to pacify his own people while at the same time maintain his strategic alliance with Israel. So far, he's been successful but the more the situation deteriorates, the less chance he stands to succeed.

According to some reports in the last two weeks, Abdullah and Prime Minister Benjamin Netanyahu held at least two secret meetings. These reports have not been confirmed by any official sources. The prime minister's office did confirm the afternoon of Nov. 6 a telephone conversation that took place earlier in the day between Netanyahu and the king.

The Jordanians have been demanding that Netanyahu declare that there is no intention of changing the status quo on the Temple Mount. Netanyahu has stepped up to the plate several times. The problem is that nobody in the Middle East believes Netanyahu, even when he tries to say something productive. In tandem with the prime minister's statements, Israel continues to publish construction tenders in various locations in East Jerusalem, thus fanning the fire. The move to recall Jordan's ambassador to Israel was coordinated between US Secretary of State John Kerry and his Jordanian counterpart, Nasser Judeh, at a meeting held in Paris on Nov. 5. Meanwhile, Jordan announced that it would review some clauses within the peace treaty with Israel. To put it plainly, this puts the treaty in jeopardy.

In a bid to allay concerns, a senior diplomatic official in Jerusalem told Al-Monitor this week, "The alliance between Israel and Jordan is stronger than anything that's going on right now. Both sides only stand to lose if the peace treaty is compromised." This statement notwithstanding, the Israeli defense establishment is very concerned by these developments. "It's certainly possible that the king will feel threatened, so much so that he will have to take a real radical step in terms of his relationship with us," a senior military official told Al-Monitor on condition of anonymity. "At this point, things are still holding up, but further escalation could result in every man for himself.' In such situations, people do not make long-term strategic calculations. Instead, they take urgent actions aimed at short-term survival."