Coping with the growing violence requires more than increased policing in East Jerusalem, where discrimination and neglect deprive residents of infrastructure, education and services. 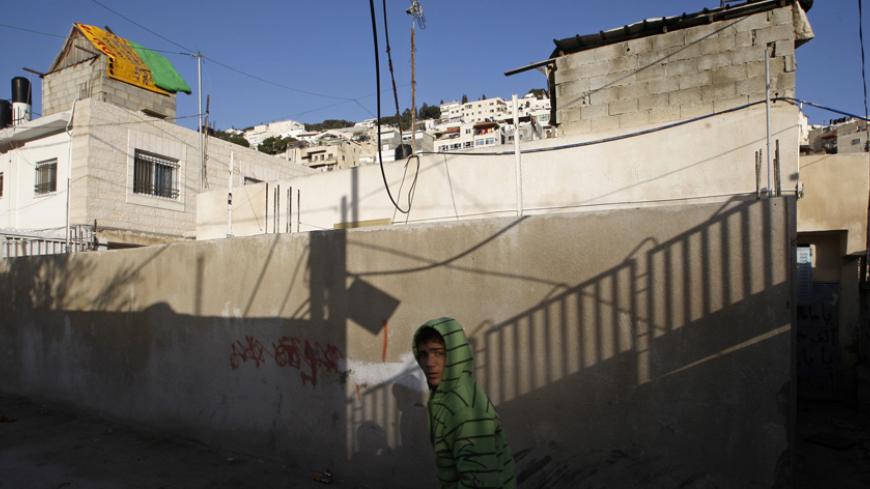 A Palestinian boy walks in the Silwan neighborhood of Arab East Jerusalem, March 4, 2009.

After the hit-and-run terrorist attack in Jerusalem on Oct. 22, in which 3-month-old Chaya Zissel Braun was killed and eight other Israelis were wounded, Minister of Internal Security Yitzhak Aharonovich said, “I don’t discern an intifada, but rather difficult events that must be stopped. … Calm must be restored to the city.”

Since the July 2 murder of Mohammed Abu Khdeir, 16, from Jerusalem’s Shuafat neighborhood by a group of young Jewish men, the city has been rocked by unrest. In addition to the daily clashes in the Arab neighborhoods of East Jerusalem between young Arab men and Israeli police, two deadly attacks have been carried out by what police describe as “lone” terrorists.

On Aug. 4, during Operation Protective Edge in Gaza, a resident of the neighborhood of Jabel Mukaber drove a piece of large construction machinery along Moshe Zaks Street in Jerusalem and ran over a pedestrian, killing him and injuring five other Israelis. This week, another such attack took place, this one at a light rail station, by a young man from the Silwan neighborhood identified with the Hamas movement.

What appeared some 2½ months ago to be retaliation by a lone terrorist for the murder of Abu Khdeir and for Operation Protective Edge is now looking like an urban intifada that has erupted after simmering just under the surface for a long time.

It is no coincidence that the terrorist who murdered the baby was from the Silwan neighborhood. If the events of the past few months can be defined as an urban insurrection, Silwan is the main focal point of the violence.

“The terrorist from Silwan may have done what he did regardless of events in the neighborhood,” said Yehudit Oppenheimer, executive director of the Ir Amim Association, which promotes equality between Arabs and Jews in Jerusalem and a political-diplomatic settlement.

“But keep in mind that for several months now, there is a process going on, where right-wing Jewish NGOs are coming into the neighborhood,” she told Al-Monitor. “Their people have been stirring up the atmosphere and causing unrest and great tension with the Arab residents.

“NGOs like Lehava, El’ad and Ateret Cohanim buy houses in sensitive, even strategic, areas of the neighborhood. Even when the purchase is legal, members of these NGOs move into the houses with great fanfare and parades, irritating the Arab residents with provocations, that here they come to ‘Jewify’ Arab Silwan.

“Well-known right-wing activists also come into the neighborhoods. After being banned from the territories by Shin Bet because of their involvement in price-tag activities, they have transferred their activities to Jerusalem. Things there are about to explode.”

According to the Central Bureau of Statistics, as of 2012, some 300,000 Arabs reside in Jerusalem (about 37% of the city’s residents). An extensive report compiled by the Association for Civil Rights in Israel, headed by writer Sami Michael, contends that 79% of the residents in the Arab neighborhoods live under the poverty line. According to the report, headlined “The Rights of the Residents of East Jerusalem,” the situation is far worse in the northern neighborhoods, which have been separated from the city with a high cement wall.

“Since the construction of the separation fence, the area has been totally neglected,” the report detailed. “There is no police presence in these neighborhoods and it’s difficult to even convince a repair technician to enter the area to fix a problem. The lack of public buildings such as schools is acute. Standard services like garbage collection and sanitation, or repair or resurfacing of roads, have become minimal to nonexistent. Playgrounds, parks and even parking bays are purely wishful thinking.”

Oppenheimer said that after Abu Khdeir’s death, “There was, of course, rage among the Arab residents, but they moved immediately to protest the situation in the neighborhoods: the neglect, the lack of services and infrastructure.” She said, ''This is linked to the residents' basic level of subsistence and the prevailing poverty in the city’s Palestinian neighborhoods. The caseload of welfare workers in the Arab neighborhoods is different from that in the Jewish neighborhoods. There is clear discrimination. The schools, too, are insufficient. The municipal system does not respond to the poverty and distress.

“The light rail provided service for Jews and Arabs together for three years. Now it’s a different story. The train has become a central target for attacks on an almost daily basis because it is perceived as a symbol of Israeli sovereignty.”

The withholding of permits resulted in unlicensed construction that, in turn, led demolition orders from law enforcement agencies. Demolitions of houses, rooms or porches in East Jerusalem have become routine, sparking violent clashes on many occasions between the residents and the police sent to ensure the demolition is carried out.

For the Palestinians, this policy (combined with the law that requires residents of East Jerusalem to prove that the city is their main abode so that their residency is not revoked) is part and parcel of what they term “silent deportation.”

Thus, it’s not only up to the minister of internal security to “calm” the city. What is required is extensive, system-wide action, unrelated to maintaining security, designed also to deal with poverty, neglect and distress in the city’s eastern neighborhoods. Any attempt to “calm” the residents of East Jerusalem by deploying police and border patrol forces in their neighborhoods will only add fuel to the fire.