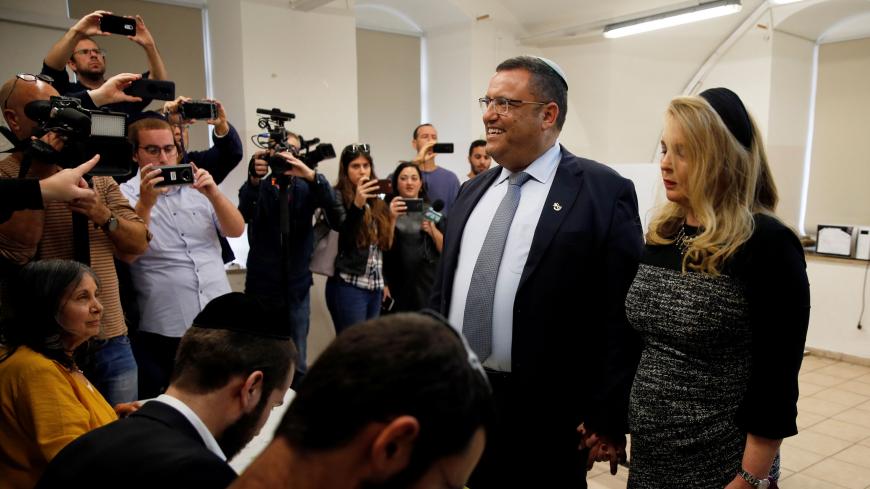 Jerusalem mayoral candidate Moshe Leon and his wife arrive to cast their votes in the second round of local council elections in Jerusalem, Nov. 13, 2018. - REUTERS/Ammar Awad

Moshe Leon won the election for Jerusalem's next mayor on Nov. 13. The next day, Leon’s key sponsor, Defense Minister Avigdor Liberman, resigned his office. The back-to-back events were no coincidence. The new mayor, by his own admission, is “in the pocket” of his “boss” Liberman, as he terms his long-time political benefactor. In recordings from 2014 obtained by Haaretz, Leon is heard saying that Liberman takes his support for granted. Undoubtedly, the hawkish head of Yisrael Beitenu will turn the holy city into his political bedrock ahead of the elections to the 21st Knesset, which may be moved up to early 2019 due to the shrinking of the government coalition following Liberman’s resignation. Still, he will be obliged to share it with Leon’s other sponsor, ultra-Orthodox Shas chair Aryeh Deri.

The Likud's battle cry — grab as many right-wing voters as you can — burst forth even before the victory celebrations by Leon and his sponsors died down. On Nov. 15, the Likud faction in the Knesset set out to fast-track a new law enabling construction in the City of David National Park in Jerusalem’s Palestinian neighborhood of Silwan, at the foot of the Temple Mount. Spearheading the project is the non-profit organization Elad, the darling of the political right and its wealthy American backers.

Another example of right-wing zeal in promoting radical projects that discriminate against Arabs is the restoration of the 19th century Yemenite synagogue in Silwan. This past August, Likud activists attended the inauguration of a project to restore the synagogue. The ceremony was conducted by another nongovernmental organization, Ateret Cohanim, Elad’s partner/rival in the campaign to settle Jews all over the area of Jerusalem known as the Holy Basin, where many of Judaism and Islam’s holiest sites are located. At the ceremony, Minister of Jerusalem Affairs Ze’ev Elkin, who lost the mayoral race to Leon in the election runoff this month, called Ateret Cohanim's founder Mati Dan “the greatest Cohen of them all, for whom we all work in the Knesset and the government” for the sake of “restoring these sites of the Israeli people.” Leon was also present.

The violent clashes set off by irresponsible Israeli politicians in Jerusalem’s Old City are too numerous to count. Nir Barkat, the city’s mayor for the past decade, was held hostage by the radical right in the city council to such an extent that he abetted in the violation of court orders to vacate an apartment building named Jonathan House (after spy Jonathan Pollard) erected by Israeli settlers in the heart of Silwan. On the other hand, when Barkat sought to promote a precedent-setting plan to build thousands of housing units for the city’s Palestinian residents, Ateret Cohanim joined petitions by right-wing forces against the plan.

When he served as Jerusalem mayor, former Prime Minister Ehud Olmert moved his office to the plaza in front of the Western Wall, Judaism’s holiest site, to protest what he termed “concession policies” toward the Palestinians adopted by then-Prime Minister Ehud Barak in December 2000. He also joined residents of the Jewish quarter in the Old City on a torch parade around the Temple Mount and the lighting of Hanukah candles adjacent to the city’s Lion Gate. Four years earlier, he pressed Barak’s predecessor Benjamin Netanyahu to open up the Western Wall tunnels, igniting rioting in which 17 Israelis and dozens of Palestinians were killed.

Subsequently, when he became prime minister in 2006 and tried to forge a deal with the Palestinians, Olmert realized the dream of peace was not compatible with the “united Jerusalem” slogan and policies to Judaize Jerusalem. Netanyahu and his partners in the current government openly declare that Jerusalem is the capital of the Jewish nation — and of the Jewish nation only.

To do his job properly, Leon will need Olympic-level acrobatic skills. On the one hand, in order to prevent violence, he must come up with immediate solutions for the dire housing crisis in the Palestinian neighborhoods of East Jerusalem, build hundreds of classrooms, rehabilitate crumbling infrastructure and improve municipal services in the neglected Palestinian neighborhoods. On the other hand, being the first ever Jerusalem mayor without a single representative on the city council, his partners on the right will tie his hands when voting on budgets for the development of East Jerusalem.

His predecessors successfully formed coalitions enabling them to fend off heavy pressure by ultra-Orthodox Jewish circles to maintain the status quo on the Sabbath (against opening businesses or public transportation on Saturdays in the city). Absent city council backing, Leon will find it hard to impossible to maneuver between the interests of his ultra-Orthodox coalition partners seeking to impose their ways on city life and the desire to stop the wave of non-religious Israelis leaving the city.

The recent election campaign in Jerusalem indicates that President Donald Trump not only relocated the US Embassy from Tel Aviv to Jerusalem this year, he also exported the strident tones and propaganda methods that brought him to power two years ago, and Leon used them in his fight for the capital.

For example, on election day tens of thousands of Jerusalemites received recorded calls on their phones dubbing Leon’s rival Ofer Berkovitch a leftist. The calls were purported to have been made by two human rights organizations — Peace Now and the New Israel Fund — that the right reviles as “treasonous” Israel-bashers. The fraudulent announcements, suspected to have been sent from the election headquarters of the right, were intended to get their supporters out to vote. “Only you can make history,” said the recorded voice. “We in the New Israel Fund and Peace Now movement have invested heavily in Ofer Berkovitch’s election campaign and it is important for you to do your bit, too. It’s good for Jerusalem, it’s good for our Palestinian neighbors, it’s good for security and the peace process. See you at the ballot boxes.”

On election day, flyers in Arabic were handed out and a fake video clip was uploaded showing a car blaring calls to support Berkovitch in Arabic. They were not his doing. In the final hours before the polling stations closed, residents identified in polls as secular voters received calls warning them of the long lines at their local polling stations. It should be noted that half of the first 10 names on Berkovitch’s ticket — called “Hitorerut,” Hebrew for “awakening” — are members of the right-wing Likud and HaBayit HaYehudi. Given that tactics of slander and fake news helped Netanyahu get elected in 2015 — especially his election day warning that Arabs were mobbing the polling stations — as well as Leon’s successful bid for the mayorship, why shouldn't the right use these tactics in the coming general elections?

In a clip he uploaded on Nov. 11, the eve of the second round of Jerusalem’s municipal elections, Deri warned that “the devil has enlisted all of his armies” to support Berkovitch. This alleged plot failed and we are left with Leon as Jerusalem’s mayor. And so, for the sake of the city residents, we should wish Jerusalem and the State of Israel a blessing from Psalm 122:7: “May there be peace within your walls, and prosperity inside your fortresses. For the sake of my brothers and friends, I will say, ‘Peace be within you.’"