Have the Kurds played their cards wrong on Kobani protests?

The members of the Wise People council sound contradictory when addressing the future of the peace talks. 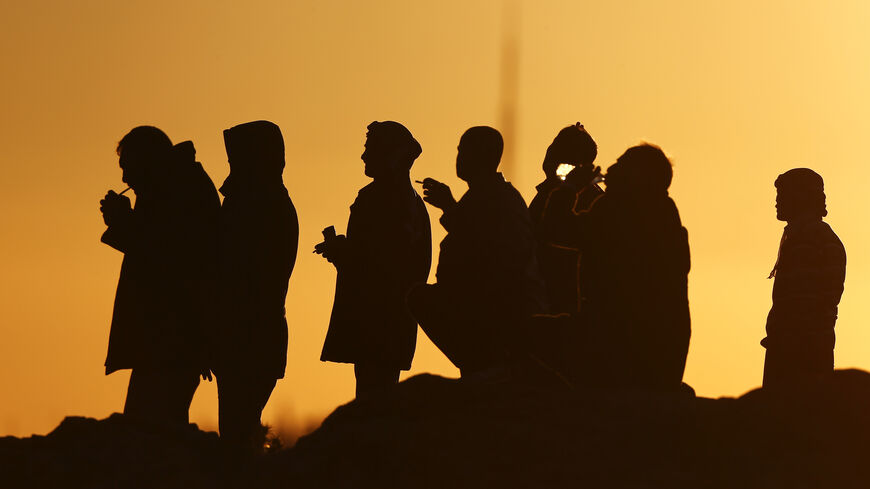 Turkish Kurds watch the Syrian town of Kobani from a hill near the Mursitpinar crossing, on the Turkish-Syrian border in the southeastern town of Suruc in Sanliurfa province, Oct. 20, 2014. - REUTERS/Kai Pfaffenbach

Since the Islamic State (IS) began attacking the Kurdish-dominated Syrian town of Kobani on the Turkish border about a month ago, Turkey’s Kurds have been blaming the Turkish government for disregarding their Syrian relatives’ suffering and strongly indicated that the peace process with Turkey is on a knife's edge. Selahattin Demirtas, co-chair of People’s Democracy Party (HDP), on Oct. 6 blamed Turkish President Recep Tayyip Erdogan for his remarks equating the Kurdistan Workers Party (PKK) with the IS. “If we want this process to produce a lasting peace, we should not abandon Kobani,” Demirtas said. “We do not want the Kobani resistance to deepen the rupture between the Turks and the Kurds. We want to have a permanent resolution. This requires some necessities to be fulfilled.”

Erdogan shot back Oct. 12, saying, “We don’t have any business with those taking orders from a terror organization.” The link between the PKK and the HDP is unquestionable, and Erdogan held Demirtas responsible for the death of 40 Turkish citizens after Demirtas’ called people to the streets to protest against the government regarding Kobani. Yet Demirtas also read a letter written by imprisoned PKK leader Abdullah Ocalan calling on all Kurdish protesters to be calm and urging the sides to intensify the peace talks. This letter would not have been delivered to the public had it not been approved by the government. Prime Minister Ahmet Davutoglu followed Oct. 17, stressing that Ocalan is neither granted “official negotiator” status nor is he considered the sole representative of the Kurds. On Oct. 19, Davutoglu held a 11-hour marathon with the Wise People council designated by the government.

“What the prime minister is arguing is that it was not Ocalan’s letter that brought the situation under control on the streets,” Avni Ozgurel, a member of the council and a long time commentator on political affairs, told Al-Monitor. “Davutoglu argues that cease-fire morale boomeranged on the HDP and the PKK and that the people did not give them the support they expected. Therefore, the prime minister believes it was not Ocalan’s letter, but the people, who ended these violent protests on the streets.”

Dogu Ergil, another member of the council and a professor at Ankara University with expertise on the Kurdish issue, has a different take. “Claiming that Ocalan was not given a central role in these talks does not sincerely reflect the choices this government has made so far in approaching this issue,” Ergil told Al-Monitor. “The government indeed assigned Ocalan as its political interlocutor. And that, in the first place, revealed that the government looks at the Kurdish issue only as a means of dealing with a security dilemma, a dilemma that needs to be addressed as a means of finding new ways of defeating terrorism. This very evaluation caused the government to decide to have Ocalan as its political interlocutor. But if it had approached the Kurdish issue as a social-conflict problem, and admitted in the first place that the resolution can only be accomplished by people’s acceptance and blessings of the end result, then it would have been the people who took center stage in these peace talks.”

Zubeyde Teker, another member of the council and head of the Diyarbakir-based Federation of Associations for Assistance and Solidarity with Prisoners' Families, objected to Davutoglu's characterizations. “I told the prime minister yesterday during our meeting that he is wrong to state that Ocalan is not given a central role in these talks,” Teker, also a member of the Freedom for Ocalan Platform, told Al-Monitor. “Mr. Ocalan is the sole political interlocutor for the peace talks with the government. There could, however, certainly be other supportive members. But it is unacceptable to blur the basis of these talks by claiming that everyone is given a seat at the negotiating table. That is not the case.”

Teker argued that what put the process at risk was not the Kurdish protests that left 40 dead, but rather the government’s not helping out the Kurds in Kobani. “The government is not good at managing this process. We understand that a cease-fire is a good thing, but how could this be a lasting situation in the absence of vital legislative changes?” Teker asked. “We believe the government’s Kobani policy negatively impacted this process. If they were to have had a positive approach to our requests to open a corridor into Kobani, this process would have a different status now.”

Ozgurel, however, argues that it is totally out of question for Turkey to do what Kurds want. “What they want is clear. While they blame this government for all its wrongs in its Syria policy, they demand that the state turn control of its border with Syria’s Kurdish areas to them. They launched a massive media campaign against Turkey, framing it as being a sponsor of the IS and a cold-hearted extremist awaiting the massacre of civilians in Kobani. These are all distorted, manipulated views of what is taking place on the ground.” Ozgurel added: “The prime minister told us yesterday that they shared on Sept. 6 a detailed road map for this process with Ocalan, Kandil [the armed wing of the PKK in northern Iraq] and the HDP. Davutoglu said that they all agreed that this was a satisfactory road map and map and that the PKK would have all its units under control by Oct. 15, and that the process would continue in the absence of any threat of violence. Yet, look what happened on our streets on the pretext of Kobani.”

Ergil also stressed that the process needs to be freed from the monopoly of the PKK’s ownership. “The ideal way ahead is that — just as the prime minister said — that this process put the people at the center. To do that, I told the prime minister yesterday in our 11-hour long meeting that this Wise People council needs to be moved to our historical archives, and that we need to open a new page. While we engage in public diplomacy at home establishing working groups bringing the people — the real owners of peace — together to agree on the principles of this peace, we also need a second track on the international front. These talks need to be freed from those who only try to accomplish things through using violence. We cannot really resolve the Kurdish issue by negotiating it with Ocalan at Imrali [prison] and then convincing Kandil of the principles of that negotiation. The civilian population has to be part of this process if we are serious about a real peace that will be endorsed and owned by the people.”

Although Ergil makes the argument against placing Ocalan at the center of the negotiations, some other members of the council proposed that the government not only allow them direct access to Ocalan, but also asked for nongovernmental organizations and the media to be able to directly talk to him. In addition, the government hints, for the sake of the talks, that Ocalan’s prison conditions can be improved.

Kobani has neither fallen to the IS nor has there been a civilian massacre there. What is, however, clear is that the fragile atmosphere between the government and the Kurdish side has fractured yet again. “There are all those lousy allegations against Turkey that it closed its border to the Kurds who wished to cross the border to Kobani to fight against the IS. Demirtas claimed that there were at least 600 fighters waiting at the border, and that if the government were to allow them across they would have killed the IS militants with their saliva. When the Turkish authorities asked for the list of those who would cross to the other side, though — that they were going to let them go — only 35 people signed up. It is all a big fat lie that Kurds were prevented from crossing the border into Syria to fight.”

Turkish Foreign Minister Mevlut Cavusoglu announced Oct. 20 that Turkey would allow Iraqi Kurdish peshmerga fighters to cross through its borders into Syria to fight against the IS.

“As far as I know, though, Kurds in Syria also do not want the peshmerga. They don’t want Turkey to help them. If they say no to the government’s parliamentary request to deploy its troops outside its borders, they should not have asked for help for Kobani,” Ozgurel said. “What they want is quite irrational, though. They want Turkey to surrender to their requests, and not question them as to how they will use that border. This is unheard of anywhere. And this is also not the way to discuss the peace talks.”