Turkey's strategic missteps in handling the Kurdish fight against the Islamic State in Kobani may lead to future domestic violence. 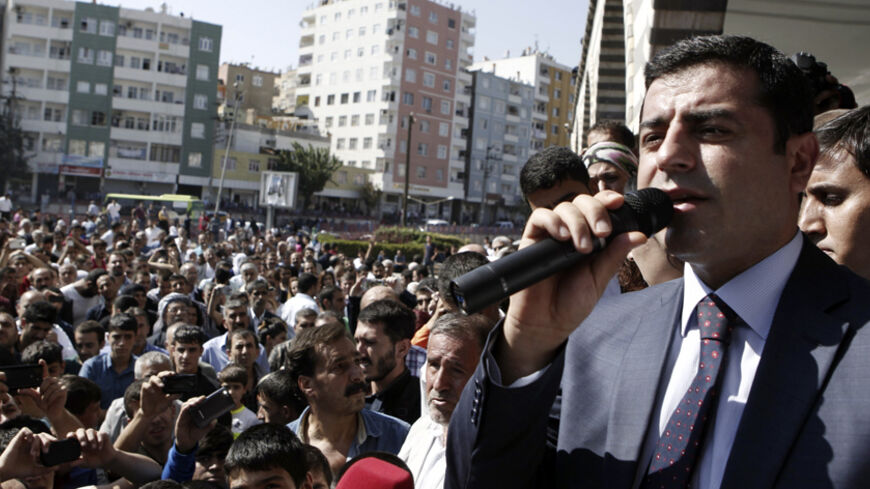 In their fight against the Islamic State (IS) in the Syrian border town of Kobani, the Kurds expected Turkey to allow the opening of a corridor to the town, as well as to side definitively with the People's Protection Units and the Kurdistan Workers Party militants who are fighting against IS there. Selahattin Demirtas, co-chairman of the pro-Kurdish People’s Democracy Party (HDP), expressed his dismay Oct. 9 with the Turkish government.

“The common allegation is that Turkey sent more than 2,000 trucks full of weapons. Some of these weapons fell to the hands of the gangs like [Jabhat] al-Nusra and al-Qaeda. Some even debated the possibility whether the Islamic State is fighting with those weapons sent from Turkey. This created a fracture in the public,” Demirtas said. “We, on the other hand, had to engage in dozens of meetings just to send a truck full of humanitarian aid to Kobani. We just want the same legal norms to be adopted for Kobani as those legal norms applied sending aid trucks to the Free Syrian Army. Turkey did not put out a clear position for the last year when al-Nusra gangs started attacking Rojava. People watched this all step by step.”

Turkish government spokesman Besir Atalay challenged Demirtas by highlighting the Kurds’ silence when Turkmen villages in Syria came under attack and many could not escape a fatal ending. “They only care about the fate of the PYD [Democratic Union Party, whose armed wing is the People's Protection Units]. I also hope that our Kurdish citizens with conscience see this, too. The PYD is only thinking about the area it likes to take under its control,” Atalay said Oct. 10. Atalay added: “There is no one left in Kobani besides the PYD militants. They have all already come to Turkey.” Turkey received about 200,000 Kurds from Kobani in less than a week.

Demirtas insisted otherwise. “At the time, when the HDP’s extraordinary central executive board meeting was in process, we received an urgent call from Kobani and we were told that IS was about to capture the Mursitpinar border gate. What does that mean? That means the news of massacres, rapes, decapitations will start coming in any moment. We acted just like any honorable party would do. We called our people to protest. We urged them to stand by Kobani,” Demirtas said. “We did not call people to violence. We did not ask them to take up arms.”

Demirtas said that they received a written note from imprisoned Kurdistan Workers Party (PKK) leader Abdullah Ocalan urging all sides to intensify the negotiations with the government for the resolution of the Kurdish issue. Demirtas argued that Kobani has a direct impact on this process.

Since the HDP brought people to the streets to protest, 35 people have died — in addition to an assassination attempt on the chief security director at Bingol that left his deputy and chief superintended dead. “When a political leader calls people to the streets to protest, violence inevitably follows,” Huseyin Bagci, head of the international relations department at the Middle East Technical University, told Al-Monitor. “Devlet Bahceli, [leader of the Nationalist Action Party] does the opposite, and urges people not to come on the streets. These are both political party leaders and one must be obviously doing something wrong.”

Bagci added, “Demirtas has a snake's tongue — forked. He does not have sincere language. It is not clear what they want in this process.”

The ongoing talks with the PKK for the last two years are a mystery. They are not transparent, and the public lacks any clear indication as to whether the sides are sorting out the details of regional autonomy or pure independence for the Kurds. It's clear that neither side has thought through the whole process; both sides find their own way as challenges and opportunities appear. Until a month ago, for example, Kobani was not a condition for the peace talks with the Turkish government.

The ruling Justice and Development Party (AKP) misread the Syrian regime’s longevity and did not give Bashar al-Assad more than a year in power; it has been almost four years now. On the heels of this erroneous evaluation, the AKP government supported the Syrian opposition through all means, refusing to acknowledge the potential threat the radicals could pose to Turkey. Until IS took 49 Turkish diplomats hostage, some analysts in the Ankara beltway speculated that Turkish President Recep Tayyip Erdogan and Turkish Prime Minister Ahmet Davutoglu believed they could control IS militants, and that the group wouldn't threaten the country. That assumption was also proven wrong.

Turkey now finds itself trapped in a puzzle of conflicts. Akin Unver, assistant professor of international relations at Kadir Has University, told Al-Monitor, “Turkey has two choices. [The first is to] alienate the Kurds, delay a confrontation with IS and squeeze PKK-PYD between Turkish military and IS. In this scenario, Ankara plays down the fact that IS already considers Turkey a potential enemy, and will encroach into Turkish territory no matter what. In this inevitable conflict scenario, Turkey is alienating the Kurds and then has to deal with IS on its own. Both Kurds, IS and Ankara may descend into fighting within Turkish territory. Second option is to support the Kurds against IS; Ankara doesn't see much strategic logic in this, as attacking IS means military readiness along the entire border. Yet, IS is here to stay, and it would always make sense to leverage the organization with the Kurds so that Turkey doesn't face full IS force on its own.”

In any case, Kurds have proven to the government that they have the power to turn Turkey’s streets toward bloodshed if their demands are not met. “After what happened in these last days, people’s nationalistic pulse is incredibly on the rise. People are very angry about all that had happened. This society is no longer in a position to give Kurds autonomy or independence,” Bagci told Al-Monitor. “The Erdogan government is clearly unsuccessful in managing the Middle East and Kurdish policies.”