Turkey’s reluctance to extend full support to Kobani may not be entirely related to the Kurdish issue. 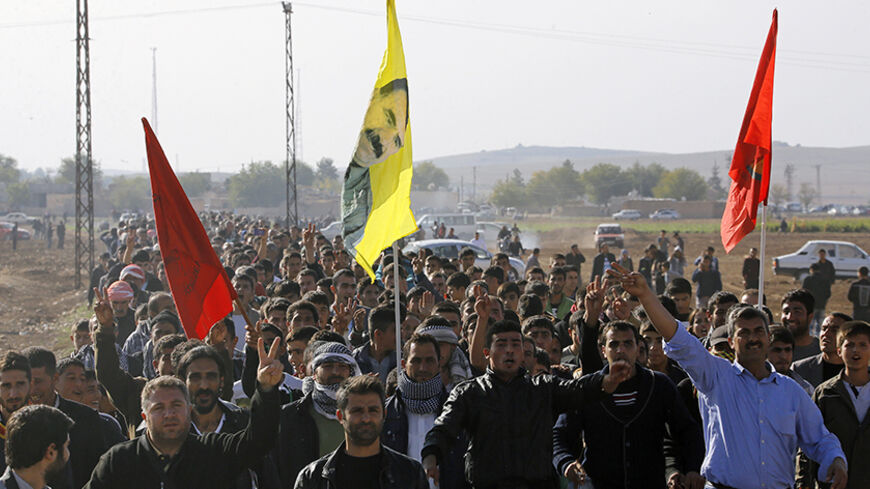 Kurdish civilians march by the Turkish-Syrian border village of Caycara to protest against the Islamic State, during a rally in solidarity with the people of the Syrian Kurdish town of Kobani, Nov. 1, 2014. - REUTERS/Yannis Behrakis

What peace means in the context of the Turkish government's negotiations with the Kurds — mainly represented by the Kurdistan Workers Party (PKK) — has been a big mystery since the beginning of these talks over two years ago. Yet, the siege of the Kurdish Syrian town of Kobani by the Islamic State (IS) for over a month has changed the parameters of the negotiations.

While Turkish Prime Minister Ahmet Davutoglu insists that the PKK should disarm for the negotiations to advance, the Kurdish side asserts that it would be suicidal for the PKK to quit fighting at this time. The talks came to a halt after the call by the pro-Kurdish People’s Democracy Party (HDP) to bring people to the streets on Oct. 6-7 to protest the government’s refusal to open a corridor from Turkey to Kobani. Although many have found ways to cross over to the Syrian side, the protests on Turkish streets killed 40.

Despite this puzzling background, Davutoglu headed the Nov. 11 meeting of the Council of the Resolution Process, sending a clear message that the government is determined to stay in the negotiations. All the top state bureaucrats, including HDP co-chair Selahattin Demirtas, participated in this meeting, which lasted over four hours. Pervin Buldan of the HDP said at a Nov. 12 news conference that it had also decided to continue with the talks. Yet he called on the government to stop threatening the HDP and to act responsibly to so they could reach a successful outcome.

“Despite our delegation’s consistent desire for peace, the government has kept on responding to us with a threatening, interventionist and negative rhetoric. What is needed is to rapidly open the communication channels that are being closed,” Buldan said, implying that they are waiting to visit imprisoned PKK leader Abdullah Ocalan to hear his say on the latest. “The government and state authorities know too well that we did all we can in a constructive way to achieve peace. And our determination to do that will continue.”

Dogu Ergil of Ankara University, a member of the government-selected Wise People Council who has decades worth of expertise on the Kurdish issue, expressed reservations about the end result of the negotiations. He argued that the government and the PKK still lack a mutually agreed-upon definition of the problem they are trying to resolve. “The government looks at this issue only as a security dilemma, while the Kurds approach it with a broader political evaluation. While we don’t know what the government has in mind as the final outcome of these talks, the Kurdish side mainly represented by the PKK has made their expectations picture clear. They want recognition, participation and autonomy,” Ergil told Al-Monitor.

“It is OK today to say that they’re recognized [as Kurds], but they still face problems in participation. They want Kurdish to be the official language in the areas where their population is the majority, and demand that Kurdish be accepted as a second language in the other parts of the country. They ask [for] lifting some limitations in exercising and living their culture. More important, they want self-governance in the areas where they are the majority.”

Ergil wondered whether the government could ever meet these Kurdish demands. “The government comes to power through elections. They may be concerned of losing their public support if they go ahead with these requests,” he said. “They may, however, end up granting the Kurds what they want in the end.”

Metropoll, a public opinion survey firm, recently tried to determine the public's pulse on the issue, yet without asking the most obvious question of whether it would be willing to accept self-governance for Kurds. Metropoll asked people whether Turkey should provide all sorts of help to the Kurds in Kobani fighting against IS militants. While 32.2% of Turks said the government should indeed help the Kurds in Kobani, 55.9% said it should not. The survey also indicates that the following groups are against helping Kurds in Kobani: 50% of the ruling Justice and Development Party's supporters, 54% of the main opposition Republican People’s Party's supporters, and 72% of the Nationalist Action Party's supporters. Moreover, Metropoll’s survey reveals that 41.6% of Turks consider IS a bigger threat than the PKK, whereas 43.7% believe just the opposite.

There are numerous ways to read these survey results. One thing, however, is clear: The questions in the survey do not reflect the reasoning behind the “yes” and “no” answers. One should not forget the July 2014 Pew Research Center survey that revealed that half of Turks are concerned about rising Islamic extremism, an 18% increase from two years ago. If this survey were conducted today, this percentage could very likely be higher. After all, the majority of the population has disapproved of the government’s Syria policy, specifically its lax border control.

Although Turkey was late in allowing the Iraqi Kurdish peshmerga to use Turkish territory to enter Syria to fight IS, security officials speaking to Al-Monitor stressed the existence of sleeper cells of these radical Islamic groups in Turkey. “One should certainly not deny that it could be a positive outcome for these two terror groups [IS and PKK] to kill each other in Kobani, but there are other concerns that we need to take into consideration,” said one official. The security officials spoke in a guarded manner about any potential threat to Turkish mainland, fearing that they might negatively affect people’s sense of security. Yet, it is an undeniable fact that Turkey has been infiltrated by radical Islamists due to this government’s troubling Syria policy that has been fixated on overthrowing Syrian President Bashar al-Assad. Now, it is a big security puzzle for the state authorities to determine how to keep the country’s image positive in support of the Kurds, while fending off any IS or radical Islamist attack inside Turkish territory.