A recent survey polled Turks and found that they are not united in their perception of the identity of terror suspects in the country. 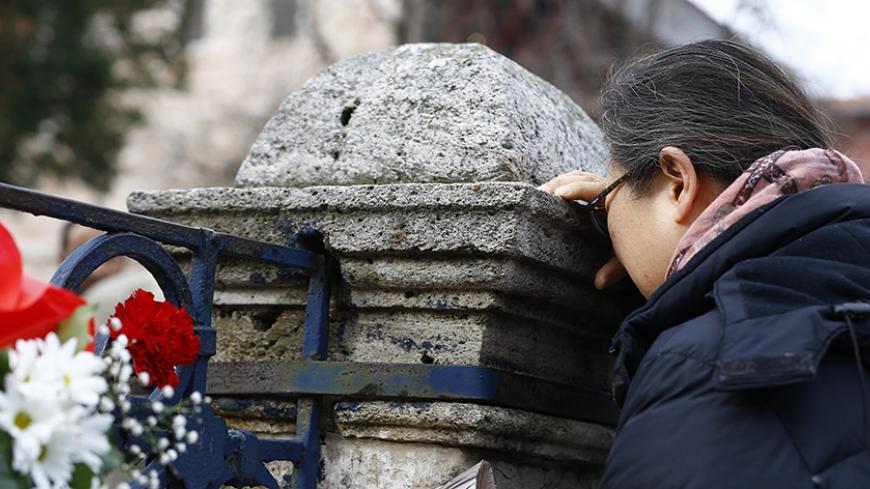 A person pays their respects at the Obelisk of Theodosius, the scene of the suicide bomb attack the day before, at Sultanahmet Square in Istanbul, Jan. 13, 2016. - REUTERS/Osman Orsal

On Jan. 12, Kadir Has University in Istanbul published the results of its fifth annual survey that investigated the views of Turkish citizens on the most pressing issues that are on the country’s agenda. The Survey of Social-Political Trends in Turkey 2015 was conducted in December, with the participation of 1,000 respondents aged 18 and older from 26 cities around the country.

To better understand the results of the survey, it is important to note that about half of the participants voted for the ruling Justice and Development Party (AKP) in the last elections, followed by partisans of the Republican People's Party (CHP) (25%), Nationalist Action Party (MHP) (12.8%) and Peoples' Democratic Party (HDP) (11.1%). In terms of the participants’ self-definition on the political spectrum, 20.7% defined themselves as conservative, 16.3% as nationalist, 14.7% as religious, 9.4% as social democrat, 7.3% as socialist and 2.9% as ultranationalist. About 65.7% defined themselves as ethnically Turkish and 11.1% as Kurdish, while 1.1% of the respondents were Alevis and 0.9% were Arabs.

One of last year's most striking findings is the change in perception of the most serious problem on Turkey’s agenda. While the respondents had cited unemployment as the most serious problem in the previous four years, in 2015 “terrorism” was No. 1 in all geographical regions where the survey was conducted, with 39.3% (compared to 13.9% in 2014); 16.3% of respondents considered "unemployment" to be the second-most pressing issue, which was considerably higher in 2014 with 33%. These were followed by corruption (8.3%), foreign policy questions (6.1%), Kurdish problem (5.2%), crisis in Syria, inequality, judiciary system, parallel structure and education.

The increase in people’s anxiety about terrorism is not surprising given the recent escalation in the conflict with the Kurdistan Workers Party (PKK) and the media’s focus on it. Government officials might not like the results of the survey that suggest that 45.8% of participants found the government’s performance in the fight against the PKK unsuccessful. On the other hand, 28% found it successful, while 26.2% of respondents thought it was neither successful nor unsuccessful. Unsurprisingly, AKP supporters found the fight against the PKK more successful than the opposition voters.

Interestingly, the majority of respondents seemed confused about the Kurdish representation in Turkey, as 32.2% believe the HDP represents the Kurds and 35.3% think the opposite. When the same question is asked about the PKK, the findings are a bit clearer, as 19.9% believe that the PKK represents the Kurdish people, while 52% stated it does not. In 2015, 28.1% of respondents believed that the PKK represents the Kurds in Turkey, with an almost equal number saying it does not. One finding that does not seem to fluctuate much from year to year is the perception of the influence of imprisoned PKK founder Abdullah Ocalan over the PKK and HDP. In 2015, 42.3% of participants stated that Ocalan completely controls the PKK, and 39.7% thought he had a lot of influence. The numbers were more or less the same in previous years. One considerable change, however, is perceived in a smaller number of people who think Ocalan has full control over the HDP. This rate decreased to 30.4% from 44.5% in 2014, thus suggesting that Ocalan is losing control of the Kurdish political party in people’s minds.

Consequently, the number of people who believed Turkey is in danger of partition increased to 54.2% in 2015 from 46.2% in 2014. Expectedly, voters of the republican secularist CHP opposition, the nationalist MHP and supporters of the Kurdish HDP believed this danger to be larger than the AKP supporters. Nevertheless, the danger of the country’s division undoubtedly extends across party lines. According to 47% of respondents, Islam is what connects the Kurds and Turks, followed by common history (26.7%), common expectations of the future (10.3%), marriage and family ties (8.1%) and economic relations (7.9%). A vast majority of respondents (64.6%) believe that Turkey should remain "a unitary state," as opposed to a federation.

On a more general note, the problem with terror that Turkey faces is not associated just with the PKK. The suicide attack in Istanbul on Jan. 12 and the terrorist attacks in 2015 in Diyarbakir, Suruc and Ankara affirm the persisting danger of terrorism in Turkey. The survey’s results confirm that the majority of participants across party lines believe the Islamic State (IS) was behind these attacks. Yet notably, 18.5% believe it was “the work of IS and the PKK," and some 13% believe it was the work of the PKK.

However, while 86.4% of respondents see IS as a terrorist organization, that rate was 93.2% in 2014. Along the same lines, while 82.3% of respondents described IS as a threat to Turkey in 2014, that rate decreased somewhat to 78% in 2015. More than half of respondents think that Turkeys’ policy against IS should include more air raids, and a considerable number of respondents believe that Turkey should give more support to the coalition forces’ airstrikes.

In summary, the results of the Kadir Has University survey show that although people in Turkey are united in their perception of terrorism as the main threat to the country, there is not much consensus on the identity of the perpetrators or how best to deal with them.