The Kurdish peace process, which Turkish President Recep Tayyip Erdogan once described as frozen but not dead, is not likely to thaw soon. 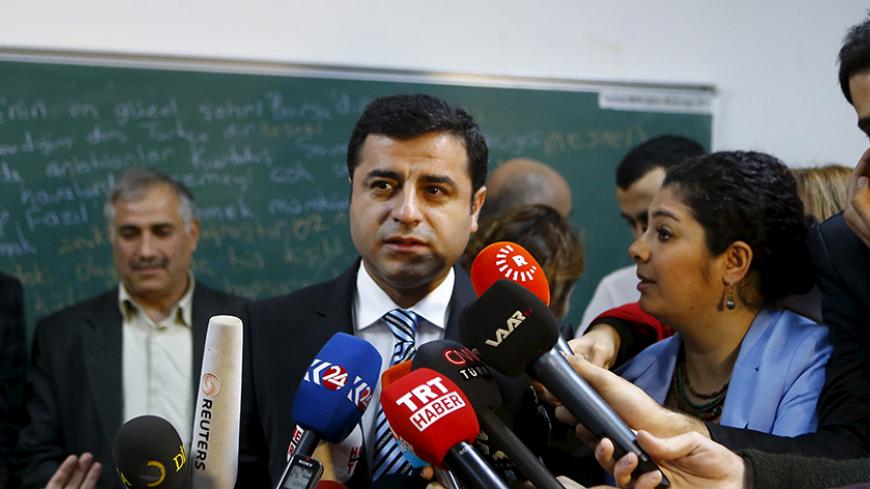 Selahattin Demirtas, co-chairman of the pro-Kurdish Peoples' Democratic Party (HDP), talks to the media before casting his ballot at a polling station during a general election in Istanbul, Turkey, Nov. 1, 2015. - REUTERS/Osman Orsal

One of the most respected thinkers of the liberal left in Turkey, Murat Belge, assessed the outcome of the Nov. 1 elections in his column in the daily Taraf: "From June to November, we passed through an absurd half-year. ... All the loss of life became the most bitter item in the balance sheet of that lost half-year. At the end of half a year, in terms of the Kurdish question, we are at the worst point that could be imagined.”

Such a gloomy assessment does not nurture some people's optimistic idea that maybe the election results had a silver lining: that President Recep Tayyip Erdogan and the ever-confident Justice and Development Party (AKP) could manifest more flexibility and resume the Kurdish peace process. After all, Erdogan had stated that the peace process was in a deep freeze, but not dead. Therefore, when the circumstances allow, it could be revived and those election results that favored him so much could be helpful.

But the strategy that brought an astounding victory to Erdogan and the AKP was based on resuming the war against the Kurdistan Workers Party (PKK) and demonizing the pro-Kurdish Peoples’ Democratic Party (HDP), which in the June 7 election had cost AKP its single-party government.

It worked, but observers don't agree on why or how. Most of these observers are mistaken when assessing the trajectory of the Kurdish votes.

Support for the AKP on Nov. 1 climbed up to 49.5%, compared with 40.8% in the June 7 election. That is some 5 million more votes than the 18 million AKP received June 7. Such an unexpected surge requires a convincing explanation.

One theory is that the nationalist vote deserted the ultra-nationalist, anti-Kurdish Nationalist Movement Party (MHP). Looking at the drastic fall in MHP's share of the votes from 16% to 11% justifies such an argument. Another theory is that some Kurds who had voted for the HDP on June 7 moved to supporting the AKP on Nov. 1. The HDP had a remarkable 13.1% in June but ended up with 10.6% on Nov. 1. Nearly all pundits agreed that those Kurds who traditionally voted for the AKP but had supported the HDP on June 7 had returned to the fold by November.

Expert analysts have tried to explain the return of the Kurdish vote to the AKP. For example, journalist Mahmut Bozarslan wrote that many voters held the HDP accountable because of its presumed links to the PKK and the Patriotic Revolutionary Youth Movement (YDG-H). “The consensus is that the HDP was made to pay for the violence instigated by the YDG-H in Turkey’s predominantly Kurdish cities of Sirnak, Silopi, Silvan and Cizre,” he wrote Nov. 5 in an Al-Monitor story.

The HDP losing 1 million votes ostensibly confirms that observation, but closer scrutiny of the Kurdish voting pattern does not.

Bekir Agirdir, CEO of Konda, one of the leading and most influential polling companies, said in an interview, “There is nothing to attest that the votes that were cast for the HDP returned back to the AKP on Nov. 1.”

Konda's findings show the sharpest falloff for the HDP on Nov. 1, compared with June 7, was in predominantly Kurdish towns in southeast Turkey where voter participation had drastically declined.

According to Agirdir, a nine-point increase in AKP’s vote tally could be explained as follows: “Four points of it came from those who had not gone to the ballot boxes June 7 and the new voters, voting for the first time. Three points were from those who had voted for Saadet (Felicity) and Buyuk Birlik (Great Unity) parties," which are the Islamist and Islamo-nationalist small parties. Also, 1.5 points came from the MHP and 0.5 from various sources.

Altan Tan, a religious and renowned conservative member of the HDP and Diyarbakir deputy, confirms the findings of Konda’s CEO. In an interview with the secularist opposition daily Cumhuriyet, he said he sees the HDP's performance as a “big success.”

All those figures and the postelection appraisals indicate that Erdogan and the AKP did not succeed in wooing the majority of religious Kurds and dissuading them from supporting the HDP.

An accurate assessment of those figures is very important in judging the near-term policy options Erdogan and the AKP government will have, regardless of how emboldened and bolstered they feel by the Nov. 1 election results.

There is nothing to suggest that Erdogan will resume the peace process with the Kurds. As recently as Oct. 26, Erdogan vowed to fight the PKK not only until the terrorist organization drops its weapons, but until it buries them in concrete and leaves the country,” according to the Bloomberg news agency.

Erdogan’s commitment to fight the PKK does have an unmistakable bearing upon Turkish foreign policy. It is not by coincidence that Foreign Minister Feridun Sinirlioglu paid his first postelection visit abroad to Erbil, the Kurdistan Regional Government’s capital. And, the fight against the PKK has a regional dimension pertinent to the balance of power in Syria.

Serkan Demirtas of Hurriyet Daily News wrote: “With Sinirlioglu’s promise that Turkey will continue its military and humanitarian assistance to both Iraq and the KRG in their fight against [IS], it should be thought that one of the leading targets of this alliance will be [IS], and then the PYD’s [Democratic Union Party] growing role in northern Syria and the PKK presence in northern Iraq.”

For the Turkish leaders, the PYD is inseparable from the PKK; therefore it is considered to be an ingredient in the “terror cocktail” that Turkey has vowed to fight. Turkey considers the latter to be the Syrian extension of the PKK. Officials made their position clear in a communique issued after a Nov. 4 security summit convened by Erdogan and Prime Minister Ahmet Davutoglu in Ankara.

Turkey’s main worry in Syria is the emergence of Kurdish self-rule in the north, which definitely would be much more infectious in Turkey than a similar movement that emerged in Iraq in the 1990s. Syrian Kurds are not under the control of people like KRG President Massoud Barzani, who is currently one of Turkey’s closest allies. To the contrary, they are directed by those who are considered strongly affiliated with the PKK.

Kurdish self-rule under pro-PKK elements (call them PYD or YPG) is a red line for Turkey’s formidable military, which is still recovering from the trauma it experienced during the first decade of AKP rule. Erdogan is keen to have the military on board.

For the foreseeable future, with all those imperatives, tough times are awaiting the Kurds, particularly those in Turkey.

And Turkey, given its geopolitical importance and deep involvement in the Syrian imbroglio, will not have it any easier.