How voters, not politicians, could be the losers in Turkey's November elections

Continued fighting in Turkey is raising security and transparency concerns about the upcoming parliamentary elections. 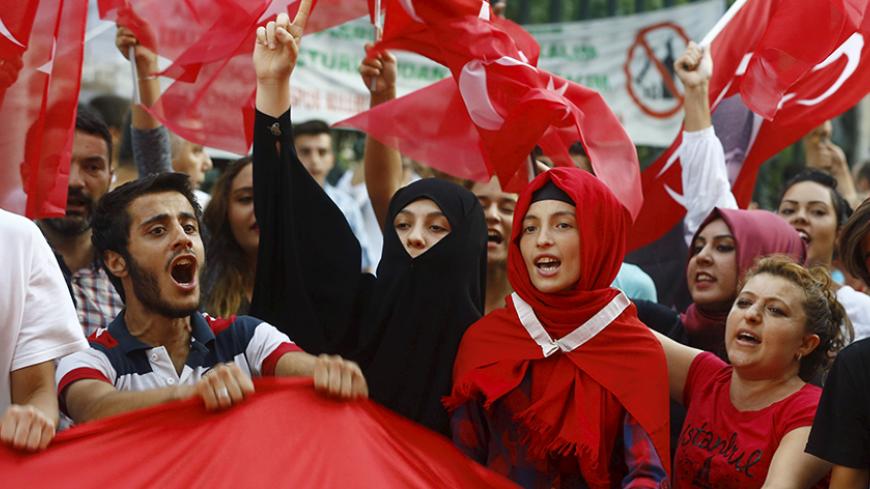 Demonstrators shout nationalist slogans during a protest in Istanbul, Sept. 9, 2015. Rising violence in southeast Turkey following the collapse of a cease-fire between the government and Kurdish insurgents will make it difficult to hold the Nov. 1 election, according to leaders of the pro-Kurdish parliamentary opposition. - REUTERS/Osman Orsal

The Nov. 1 parliamentary elections will have direct bearing on the democratization of Turkey, the course the country will adopt and how the spiral of violence that has swept the country since July 20 will evolve. But the primary issues about the elections are how to ensure security in the 22 predominantly Kurdish provinces in eastern and southeastern Turkey, and whether the election results will reflect the free will of voters.

The real contest in those provinces will be between the Peoples’ Democratic Party (HDP) and the Justice and Development Party (AKP). The HDP had major success in the June 7 elections but couldn’t become the key representative of Kurdish politics, under the shadow of the armed power of the Kurdistan Workers Party (PKK) and the dominant AKP, which seems to be backed by the state security forces.

The November election will also tell us whether the HDP can be the driving engine of the Turkish left. But the election, in addition to its political ramifications, has become a struggle for dignity for the Kurdish political movement.

Mustafa A., an anonymous observer who spoke to Al-Monitor from the restive town of Silopi, said the Patriotic Revolutionary Youth Movement (YDG-H), the fighting youth arm of the PKK, is sending this message to people in the conflict zone: ‘‘This election is a matter of life or death for the Kurds. With this election, the Kurds will either have free political will to determine their own future or continue to live in indignity under the oppression of the Turkish state.’’

Election security in the conflict zone will have three distinct phases: security of the election campaign, security on election day and security during vote count, which are described below:

HDP spokesman Ayhan Bilgen told Al-Monitor that in the 22 eastern and southwestern provinces, all government personnel, supplies and financial resources are serving the AKP. Many of the provincial governors and public officials are working as AKP volunteers. "They threaten the electorate that unless they vote for the AKP, public services will be cut," he said. Bilgen also claimed the AKP is exploiting state resources to finance its election campaign, and he called on the AKP to provide transparency on its financing in the southeast.

Tahir Elci, president of the Diyarbakir Bar, agreed with Bilgen’s views. “We can say that Turkey has a just and dependable election system of voting and vote counting. I have no fears about the election day. The presence of security officials and political party representatives gives confidence. Worries are not about the election day, but the campaigning." He said no measures are being taken to ensure political parties can freely access the electorate and conduct their campaigns. "In an atmosphere when there are funerals for security officials and guerrillas, the HDP cannot hold rallies in Osmaniye, Ankara and Manisa, and the AKP cannot campaign in Cizre, Lice and Batman.”

Adnan Tatar, the top AKP candidate for Kurdish-populated Sirnak, said campaigning for the coming elections is more difficult than it was for the June 7 elections. ‘’We are in 2015, but conditions are reminiscent of pre-2012. The reason is the PKK’s efforts to impose its tutelage over the regional people and to intimidate them with violence. After 2002, the AKP introduced major moves toward freedoms and changes in the region first by opening up to the Kurds and then by the solution process.

"President Erdogan rescued us from the oppression of the Emergency Status that was caused by the PKK. I am not a violent and separatist Kurd. I am proud of my Kurdishness but also of my flag and country. Kurds in the region today are under the extortion vise of the PKK, which seeks economic collapse and destruction. This is not Kurdish nationalism," Tatar said.

Security sources in the region speaking to Al-Monitor endorsed Tatar’s views. They said the PKK has launched a massive effort, allotting personnel from its mountain cadres to coordinate and supervise election campaigns in towns and villages. These workers are putting together a means of monitoring the voting intentions of their neighbors, relatives and everyone in towns and villages. There are also reports that PKK is threatening to seize the assets of anyone voting for any party other than the HDP and to try those people in its kangaroo courts.

The HDP's Bilgen said his group asked for cameras to be installed in election halls of critical towns but the government refused, saying security agencies' measures will be enough. But Bilgen notes that on election day, security officials can enter the election hall only on the request of the chief of the local election board.

The AKP's Tatar said he is confident Turkish security measures will be adequate. He said he has no concerns about the security of the ballot boxes.

Bilgen spoke about the critical powers of local election board chiefs during the vote count and preparation of result sheets that makes the election officials' neutrality and transparency crucial. That official has to ensure there is no discrepancy between the result sheets to be given to observers and to the election board. He also pointed to the importance of allowing HDP observers to be present when the vote sacks and final tally sheets are transported by armored cars and helicopters in risky areas.

Although there are rumors in Ankara corridors that the elections could be postponed if clashes escalate, both Ankara and the PKK seem intent on proceeding.

In sum, an important test awaits Turkey’s democracy Nov. 1. A balance needs to be struck between election security and election transparency by fully enabling political party representatives to observe the voting and counting process. Security will be determined mainly by the wisdom and efforts of local decision-makers to cope with crises, and the attitudes of the security forces and the PKK.