Will there be a 'Kurdish AKP' in Turkey?

Turkey’s ruling party appears to be on a quest to weaken the Kurdish political movement by promoting divisions and polarization in the Kurdish community. 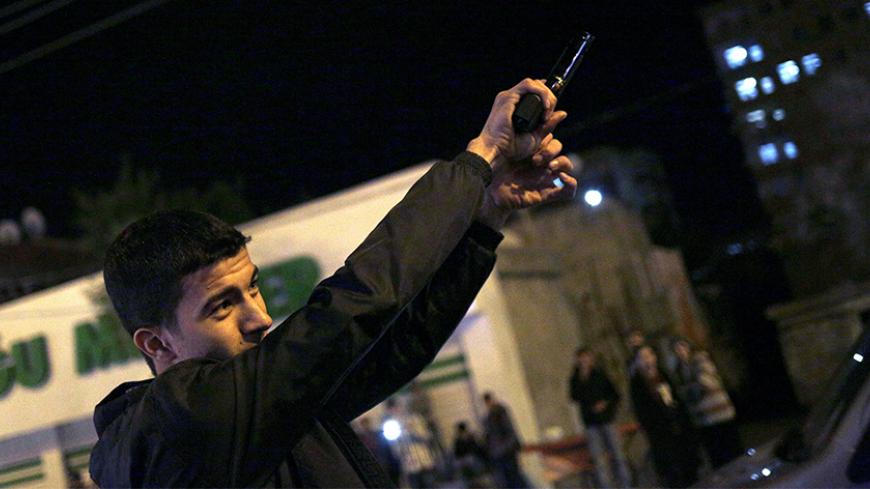 A supporter of Turkey's pro-Kurdish HDP opposition party fires a gun as he celebrates the election results outside the party headquarters in Diyarbakir, Turkey, Nov. 1, 2015. - REUTERS/Stoyan Nenov

Turkey’s June 7 elections marked the end of the Justice and Development Party’s (AKP) supremacy in the predominantly Kurdish southeast, where it had been the No. 1 political party since its coming to power in 2002. The rise of the pro-Kurdish Peoples’ Democratic Party’s (HDP) in the region, which came at the expense of big AKP losses, has prompted the AKP to redesign Kurdish politics.

The first signal came ahead of the June 7 polls as President Recep Tayyip Erdogan blasted a 10-point road map agreed between government representatives and the HDP as part of the settlement process. He later said he did not recognize the agreement and declared that the settlement process was over.

The strong result of the HDP in the June 7 polls resulted in intensified efforts by Erdogan and the AKP to curb the party, polarize the Kurdish electorate and weaken and reshape the Kurdish political scene.

The July 20 suicide bombing in Suruc, which targeted pro-Kurdish activists, came as a watershed, marking both the escalating threat of the Islamic State and the resumption of terrorist attacks by the Kurdistan Workers Party (PKK). The Kurdish-majority southeast has become the theater of bloodshed and destruction, and the Kurds now worry more about their security than political priorities.

Erdogan and the AKP subsequently employed a rhetoric that equated the HDP with the PKK, drew links between the HDP and terrorism and portrayed the HDP as an adversary of Islam, seeking to entice "devout Muslim Kurds" away from the party.

Deputy Prime Minister Yalcin Akdogan and other AKP officials are blaming the HDP and the PKK of abusing the settlement process; they hold the HDP responsible for the escalation of the terrorist threat, including the Oct. 10 twin suicide bombings in Ankara that claimed 102 lives. Akdogan has warned that the HDP might be eventually outlawed for its links with the PKK, seeking to create anxiety among the Kurds over the party’s future.

The AKP's efforts paid off in the Nov. 1 snap elections as the ruling party regained its parliamentary majority; the HDP lost over 911,818 votes of the total it had gained in the June 7 elections, which went largely to the AKP.

According to HDP lawmaker Altan Tan, the AKP managed to win back a third of the conservative Kurdish voters who had left the AKP and gravitated toward the HDP on June 7. “This was a warning signal, a yellow card. The walkout could continue if we fail to come up with the policies these voters desire,” Tan said in a newspaper interview after the elections.

Since the Nov. 1 polls, the AKP has intensified its efforts to permanently break the bond between conservative Kurds and the HDP, and create the popular base for an alternative Islamic Kurdish party or a “Kurdish AKP.” The AKP is targeting the conservative Kurdish electorate that Tan says remains with the HDP, and it is likely to coax the HDP’s conservative and moderate Islamist lawmakers in defecting and creating a new party for the next elections, in 2019 or earlier.

In its June 7 election campaign, the HDP used the slogan “We won’t let you become an executive president,” a reference to Erdogan’s ambitions to create a presidential system, which considerably boosted the HDP’s appeal and assisted it in passing the 10% national threshold that Turkish electoral law requires to enter parliament. After Nov. 1, however, several senior HDP members have displayed a more moderate, if not welcoming approach on the issue, saying that a presidential system similar to that of the United States or Mexico could be discussed.

Signaling an emerging rift within the party, the HDP’s Adil Zozani, for instance, said an executive presidency for Erdogan could be supported if this would mean the settlement of the Kurdish problem and freedom for jailed PKK leader Abdullah Ocalan, who is serving a life sentence on Imrali island.

The AKP’s parliamentary majority today is only 13 seats short of the majority required to change the constitution. In this context, the possibility of the AKP cajoling the HDP’s conservative lawmakers into defecting and creating a moderate Islamist Kurdish party as an AKP ally in parliament cannot be ruled out.

Recent reports of pro-AKP media and columnists have also reinforced expectations of AKP maneuvers to weaken the HDP. Yeni Safak’s editor-in-chief Ibrahim Karagul, for instance, describes the AKP’s new term in power as the “Third Golden Era,” and claims the HDP and the PKK would be now discarded as interlocutors on the Kurdish question. According to Karagul, “A merciless struggle will be waged against [PKK] terrorism, which has now devolved into an internal occupation campaign. The HDP will no longer be treated as an interlocutor. … [Ocalan] will no longer be treated as an interlocutor either. The course of action will be based on the fact that the HDP and the PKK have become the vanguards of an international war on Turkey. New parties and new representation mechanisms [for the Kurds] will perhaps be established.”

Prime Minister Ahmet Davutoglu’s former adviser Etyen Mahcupyan also claims the HDP will be sidelined on the Kurdish question. The settlement process, he says, could be “taken out of the freezer” after new political formations and new negotiating mechanisms are created.

In another remarkable development, the head and senior members of the outlawed Socialist Party of Kurdistan (PSK) have recently returned to Turkey after 35 years in exile with a decision to “engage in legal politics.” The PSK, which rejects armed action, has a history of bad blood with the PKK. In remarks upon his arrival in Diyarbakir in mid-October, PSK Secretary-General Mesut Tek spoke in positive terms of the AKP, saying, “I don’t think the Kurdish national movement’s blind antagonism toward the AKP serves the interests of the Kurds.” He stressed they were back in Diyarbakir to engage in democratic Kurdish politics, signaling that the HDP will face a challenge also from the Kurdish left.

In sum, the AKP appears to be determined to strip the HDP of the 1,5 million devout voters that Tan estimates to remain with the party by pushing the creation of a “Kurdish AKP,” while simultaneously trying to weaken the HDP’s leftist wing via the PSK. The defection of several lawmakers from the HDP to the PSK could lay the groundwork for parliamentary representation for the PSK.

Meanwhile, a draconian security crackdown, including lengthy, round-the-clock curfews, has been underway in the predominantly Kurdish southeast since the summer. In this context, a two-pronged strategy seems to be at work: suppressing and bullying the Kurds with heavy-handed security measures on one hand, while dividing them politically through new parties and formations on the other. The ultimate goal, it seems, is to debilitate and polarize the Kurds before bringing them back to the negotiating table as a much weaker interlocutor.