Why are so many staying silent on the Kurdish conflict?

Kurds and Turks in the western provinces of Turkey are reluctant to raise their voices about the prolonged Kurdish conflict. 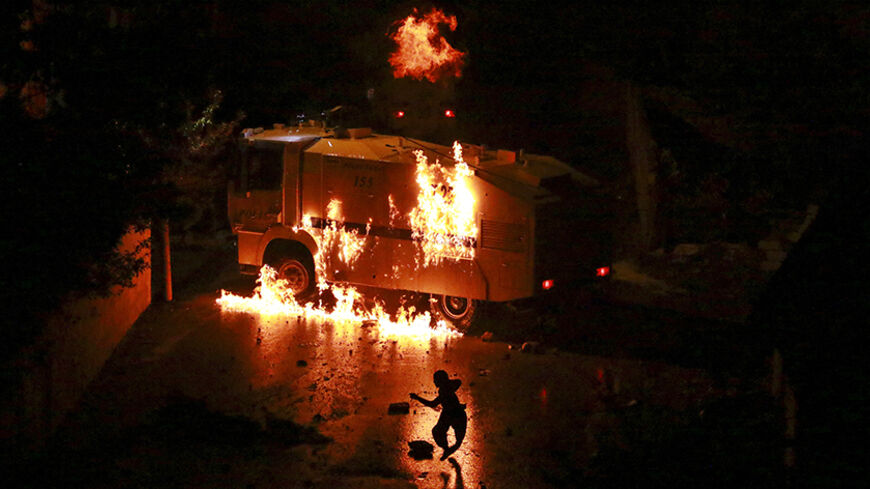 A man runs away from a burning police vehicle during clashes between riot police and Kurdish militants in Van, eastern Turkey, Aug. 27, 2015. - REUTERS/Bedran Babat

Berfin, a self-described Kurdistan Workers Party (PKK) sympathizer, met with Al-Monitor on Dec. 7 at a bustling Istanbul cafe. She talked about her grievances in detail, on condition her last name not be used. “I grew up here in Tarlabasi, but I went back to Sur, Diyarbakir, when I got married four years ago. My family had moved to Istanbul from Sur in the 1980s. My husband feared I would be allured by the PKK so he sent me and the children back here. Life in Diyarbakir is nothing like what you see on TV. It is constant fear. I am tired of being scared, so I wanted to fight for my three children. Here people — my own relatives — do not want to hear about life in Kurdistan. They call it fate, and then start gossiping. It is their indifference that hurts me more than the bombs,” Berfin said.

Pro-Kurdish Peoples' Democratic Party (HDP) Co-chair Selahattin Demirtas echoed similar sentiments in his Dec. 22 speech. Demirtas said, “Is it courageous to enter small villages with tanks and artillery? There is not much the [Turkish] armed forces can do at this point. The problem is a political one and requires a political solution. We warn the government against human rights violations. They don’t allow people to bury their dead, there is an embargo on food deliveries and there is torture on the streets. In the west of Turkey, they may think 'Great, those terrorists got what they deserved.' But that's wrong because you are paying the cost of the war out of your pocket. People [in the west of Turkey] should raise their voices against this, because this is done in their name. If Turkey’s west says 'No' to this war, the government cannot prolong it for another day. Dialogue and negotiations can start the next day. We are willing and ready."

Following the collapse of the peace process this summer, pundits feared this time the conflict would not be contained to southeastern Turkey, as there is a sizable Kurdish population in all western cities. The fear was that the alienated Kurdish youths in the slums of Istanbul, Ankara and other cities would wreak havoc on the streets. Since an overwhelming majority in Turkey supported the peace process, its collapse was expected to generate a backlash. The peace process collapsed and now President Recep Tayyip Erdogan has vowed to crush the “self-rule” movement. So why are the people, both Kurds and Turks, in the western provinces silent about the suffering of the Kurds?

There are four main reasons. The first is that the opposition is suppressed and labeled as terrorist. It is not easy to raise one's voice in Turkey against the Justice and Development Party (AKP) government on any issue, especially when it involves the PKK. Multiple times peace activists have fallen victim to terrorist attacks and arrests. For example, most recently 15 Dokuz Eylul University students were arrested in Izmir while protesting for peace. These negative images associated with peace has curbed any enthusiasm to use civic rights to protest. In addition, with the crumbling of the peace process, the state security forces have initiated a proactive plan to arrest, question and even shoot at potential activists.

The second reason is the assimilation of the Kurds in the western provinces. Although Demirtas is calling upon the people in western Turkey to raise their voices, even the majority of Kurds have not shown willingness to take on this call. Hatice Altinisik, a member of the HDP’s Central Executive Council, told Al-Monitor, “The fear factor is strong, yet fear doesn’t solve the problem." She said that in the last 40 days, "Four female activists were murdered by police forces in Istanbul. The west [of Turkey] is not immune to the war — they also suffer the pain of loss with the fallen martyrs [soldiers], experience an unequal wealth distribution, a rising murder rate and violence against women. So they should stand up along with the people of the southeast in their own interest.”

Sultan Ozcan, one of the HDP’s founding members, told Al-Monitor, “All over the western provinces we know of people with deep concerns and worries about the events in the southeast. Morale is low, and people are not confident that the street protests will provide any positive results. There is a lack of organization as well among activists.” The AKP’s efforts to curtail terrorist activities have in a sense also numbed nascent civic society’s strength.

The third reason for those in western Turkey to remain silent is the curtailed moral ability to speak up in the face of an increase in the deaths of soldiers and police officers. The majority of people in the west do not view the current unrest as nonviolent resistance but as terror attacks. Several towns in the southeast that had a majority of HDP voters in the last elections have declared "self-rule" and have started digging ditches around their towns. People in the west of Turkey cannot comprehend the meaning of self-governance or the necessity of the trenches, both of which have negative connotations. While the number of deaths is increasing, it is morally challenging to praise resistance in the southeast as peaceful.

Aytunc, a HDP voter from the Galata region of Istanbul who only gave his first name, told Al-Monitor, “I voted for the HDP, but it failed to differentiate itself from the PKK. Demirtas had a good chance to stand up against Erdogan; however, he failed to stand up against the PKK. The PKK is kidnapping children, burning towns, attacking policemen while they sleep. What is the government to say, 'OK, let the PKK be?' I am not sure what Demirtas is really asking of us. What are we to do when every day more soldiers and police are coming home in body bags? I am for the HDP, for peace. I will not stand by the terror organization PKK.” Aytunc’s girlfriend, Sema, added, “Almost half of the AKP’s top echelons are Kurds. If they are not standing up for their people in Sur, Cizre or Silopi, then it must not be so bad right? So why should we risk our lives?”

Professor Ozer Sencar, director of the Metropoll polling company, provided an explanation that confirmed what Aytunc said. “Demirtas failed to speak against the PKK command at Qandil and the PKK in a strong voice — in a voice he used against Erdogan. Sadly, Demirtas signaled that he was not a strong enough leader to stand up against the PKK and this affected the election results [loss in HDP's vote share between June 7 and Nov. 1]," Sencar said.

In this regard, Zeynep Bozdas, foreign relations adviser for the Islamist party Huda-Par, said, “There is a connotation of 'west' for the HDP and Demirtas that we must underline. There is the west in Diyarbakir, as there is in Istanbul. They are the upscale neighborhoods. If ditches are a symbol of the people, why do they not appear around Diclekent [a district where HDP parliamentarians reside in Diyarbakir]? Why do all rockets kill only the poor Kurds?”

The fourth reason is the lack of credible information. People in the western provinces can no longer claim they didn't know about the raging violence in real time. However, it must be said that the majority of people in Turkey still get their news from TV that is dominated by pro-government channels. In addition, it is difficult to know what is credible information with the strong bias and manipulative trolls on social media. Hadi Elis, a sociologist and activist, told Al-Monitor, “The politicized masses are active up to a certain level. However, due to the broken lines of communication, the open and public communications that the state can control and manipulate — not focused on higher principles or a primary focus to fight for, much divided and personalized on secondary issues — the level of activities are not sufficient to curtail the state violence.”

Dilek Gokcin, a film director who closely follows Kurdish matters, told Al-Monitor, “For decades there have been several incidents of mass violence without proper public reconciliation. We live in a constant state of denial. So maybe the question 'Why are people silent when there is a war?' is not quite appropriate. There is no war here, the war is in Kurdistan. Ignorance then becomes the ultimate bliss. If you don't know, you cannot be held accountable, so most people have a rational apathy because they are helpless in the face of atrocities.”

Berfin was right after all. The majority of people in the western provinces choose deliberately to ignore the bad news coming from the southeast. Many argue about their choice of words: Kurdistan or southeast Turkey? Kurdish problem or southeast conflict? Most do not believe that raising their voices would do the Kurds any good, but are convinced it would harm their personal interests.

Although Demirtas asks those in Turkey’s west to raise their voices, are the HDP representatives ready to do this? Are they able to understand the causes of the deafening silence? A difficult question remains: Is the silence in the western provinces a harbinger of deeper resentment or an approval of the government’s policies?