The recent rapprochement between the Kurds and Russia is a new phase in the two sides' relations that date back to the 19th century, but Kurds do not want to alienate the United States either. 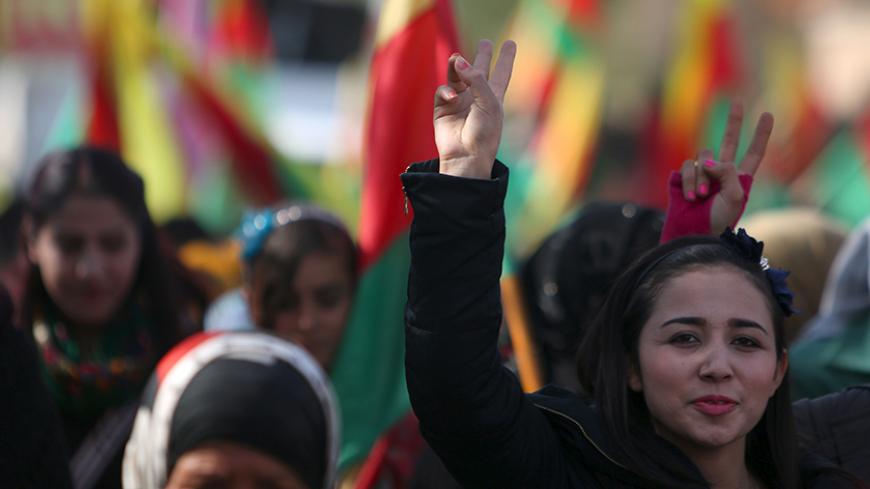 Kurdish people carry flags and flash victory signs as they take part in a protest in the city of al-Derbasiyah on the Syrian-Turkish border, Feb. 9, 2016. - REUTERS/Rodi Said

Nowadays, one of the least enviable positions in Washington is that of a government spokesperson who is required to give daily briefings to the media. Turkey’s President Recep Tayyip Erdogan, a frequent critic, recently lashed out against US policy regarding Syrian Kurds. Erdogan referred to US State Department spokesman John Kirby’s remarks that Washington does not see the Syrian Kurdish nationalist Democratic Union Party (PYD) and the Kurdish People's Protection Units (YPG) as terrorist organizations.

In Kirby's press briefing April 28, reporters brought up Secretary of Defense Ashton Carter's statement earlier that day acknowledging "the direct link" between YPG forces in Syria and the Kurdistan Workers Party (PKK). The United States has officially designated the latter as a terrorist group, but not the YPG.

Kirby found himself in a lengthy exchange with a journalist. Kirby insisted, "Our position on the PKK and the YPG have not changed," and, as if pleading, he asked, "Can we move on to North Korea?"

The reporter persisted, "Can you say, just again, it's not linked to the PKK — you support it [YPG]. If it was linked to a terrorist group, you wouldn't support it otherwise?"

Kirby's response must have pleased the Syrian Kurds, while causing dismay in Ankara: "YPG's not a designated foreign terrorist organization. PKK is. Nothing's changed about that."

Washington's position is understandable. The Syrian Kurds have proved to be a most dependable fighting force on the ground against the Islamic State (IS) in Syria. After Russia entered the scene as a staunch supporter of the Kurds, the United States apparently became wary of a possible shift in the Kurds' alliances. One of America's most valuable allies in Syria could be lost to Russia.

Moscow's relationship with the Syrian Kurds is apparent. Britain's Foreign Secretary Philip Hammond said PYD militias are coordinating with the regime of Syrian President Bashar al-Assad and the Russian air force. Hammond told the British Parliament, "What we have seen over the last weeks is very disturbing evidence of coordination between Syrian Kurdish forces, the Syrian regime and the Russian air force, which are making us distinctly uneasy about the Kurds' role in all of this."

Acknowledging Turkey's concerns, Hammond said, "Turkey has a problem with links between the PKK and Syrian Kurdish groups, PKK being a terrorist group, designated as such in Turkey and indeed in the UK."

What was interesting about Hammond's remarks is that they followed a blunt statement by Turkish Prime Minister Ahmet Davutoglu, who called Syrian Kurdish forces "hired soldiers" of Russia. Addressing members of his ruling Justice and Development Party on Feb. 16, he said, "Neither Daesh [IS] nor YPG are primary components of these territories. The YPG and the PYD are legionnaires and hired soldiers of Russia."

Davutoglu added, "PYD and YPG are puppets of Russia and subcontracted organizations used by the blood-spiller Assad regime and Russia."

Notwithstanding the highly debatable nature of his description of the PYD and the YPG as puppets of Russia, not many are contesting the Russian connection with "the Kurdish national movement," a label used by some Kurds to cover all groups, institutions and organizations under the PKK umbrella.

Some months ago while in Sulaimaniyah, Iraqi Kurdistan, I heard from credible sources that the Qandil Mountains, where the current political-military leadership of the PKK is located, is full of Russian advisers. When I asked when that happened, I received the sarcastic response, "Since you [Turks] downed the Russian fighter jet" Nov. 24.

It is very likely that Russian military assistance extends to Syrian Kurdistan (Rojava) as well. In March, another credible source who had just been in Rojava told me there seems to be a tacit deal between the Americans and Russians with respect to supporting the PYD and the YPG: While the United States is determined to support the Syrian Kurds east of the Euphrates toward Raqqa and beyond, the Russians will unconditionally support them to the west of the Euphrates, all the way to the Mediterranean Sea.

I am also told that the Syrian Kurds, while aware of the "generosity" of Russian support, are still careful not to upset the Americans and lose that support.

In Sulaimaniyah, I asked PYD leader Salih Muslim about the validity of everything I had heard. He did not reject these allegations outright. However, he said Americans have to be more forthcoming. If they really want Raqqa to be retaken, he said, the capture of Manbij is mandatory to cut to the supply route between Turkey and IS which, according to him, still functions, although it has diminished in the past year. It's noteworthy that he spared Russia any critical remarks.

The Syrian Kurds opened a Moscow office in February and Muslim was a regular visitor to the capital of Russia.

Russia already has a very different stand than that of the United States and the European Union, not only on the Syrian Kurds but also on the PKK. In stark contrast to the United States and most European Union member states, Russia has not put the PKK on its blacklist. In October, Russia's ambassador to Ankara, Andrey Karlov, said his country did not regard the group as a terrorist organization.

"Neither the PKK nor the PYD are considered terrorist organizations by either Russia or the United Nations Security Council," Karlov told Russian News Agency Ria Novosti.

If the close historical links between Russia and the Kurds are revisited, the current interaction between the two sides can be better understood. Russian involvement with the Kurds goes all the way back to the 19th century when Russians backed the Kurdish rebellions and nationalist organizations led by the powerful Bedirhan (Badrkhan) family, the semi-independent emirs of Cizre in southeastern Anatolia whose influence extended into the territories of today’s Iraqi Kurdistan. A scion of that family, the last independent Kurdish emir of Cizre, Abdurrezzak, was known to be a Russophile.

During post-Czarist Russia, the Russian interest in the Kurds continued. In 1923, Soviet authorities established "Red Kurdistan" as an autonomous Kurdish entity between Soviet Armenia and Soviet Azerbaijan over the Lachin corridor, which is still contested between Armenia and Azerbaijan. Red Kurdistan existed until 1930, when Joseph Stalin disbanded it.

Nevertheless, Stalin did become the main supporter of the first independent Kurdish state in modern history, the Mahabad Republic, known by the name of its capital, in Iran's Kurdistan province. The Mahabad Republic was declared in December 1945 by the Iranian Kurdish nationalist leader Qazi Muhammad. Mullah Mustafa Barzani, the father of current Kurdish Regional Government (South Kurdistan) President Massoud Barzani, was the defense minister and commander-in-chief of Mahabad's armed forces.

The Mahabad Republic collapsed after Soviet forces withdrew from Iran in 1946. The withdrawal deprived the independent Kurdish state of its major backer, and the advancing Iranian army brought Kurdish independence to an end and executed their leader Muhammad and his companions in the main square of Mahabad.

Mullah Mustafa Barzani and his expeditionary force managed to escape, first back to Iraqi Kurdistan and then by walking through the mountainous Kurdish territory to the Soviet Union, where they took refuge.

The Kurdish "Long March" of Barzani and his survival made him the legendary nationalist leader of all Kurds. With such credentials, he led the Kurdish struggle in Iraq from 1961 until 1975, to be replaced mainly by two different Kurdish nationalist organizations. One was the Kurdistan Democratic Party led by his sons, Idris and Massoud. The other, which broke from the KDP, was the left-wing Patriotic Union of Kurdistan led by Jalal Talabani, who later became the first president of Iraq after the downfall of Saddam Hussein's regime.

Mullah Mustafa Barzani's and his companions' 12-year exile in the Soviet Union, which started in Nakhchivan, continued in Azerbaijan proper and for the longest period in Uzbekistan, until he finally moved to Moscow, where he cemented the Soviet (and then Russian) connection to the Kurds — be they in different parts of Kurdistan or among the Kurdish diaspora.

During the Cold War, as the Soviets established their influence on the Baathist regimes of Syria and Iraq, Moscow’s relations with the Kurds took a back seat, but never waned completely.

Very recently, I learned that following the Gulf War of 1991, Talabani sent an emissary to Yevgeny Primakov (1929-2015), the Soviet-Russian intelligence chief who also served as the prime minister of Russia in 1998-1999, asking how to conduct Kurdish relations with Saddam's regime in Baghdad. Primakov offered to mediate between the Kurds and Saddam, while also being supportive of Kurdish self-rule.

With a revived interest in the Kurds, partly as a result of the deterioration of their relations with Turkey over Syria, the Russians are once again a factor in the Middle East as efficiently as its Soviet predecessor during the Cold War.

The Kurds are instrumental in the Russian re-entry to the Middle East, and the Americans are right to be worried — and to fine-tune their policies regarding the Kurds and Ankara.

The title of a recent article in an American periodical is perhaps quite close to the truth: "Vladimir Putin, Godfather of Kurdistan?"