Turkey's 'foot-dragging' on fight against IS continues

Diplomats say Turkey’s sincerity will be judged by its determination to continue its active support of the US-led coalition against the Islamic State. 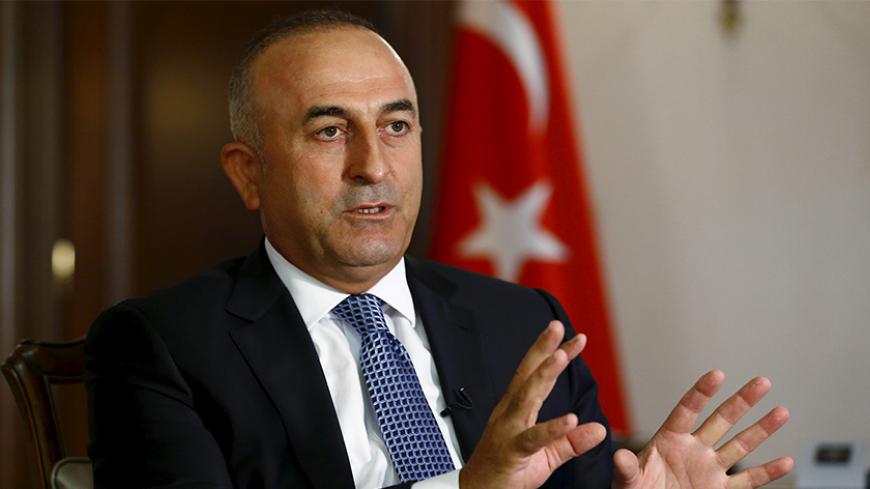 Turkish Foreign Minister Mevlut Cavusoglu answers a question during an interview with Reuters in Ankara regarding the launching of Turkey's "comprehensive" air operations against Islamic State fighters, Aug. 24, 2015. - REUTERS/Umit Bektas

Following months of negotiations between Turkey and the United States, Turkish fighter jets finally joined in the active strikes by the US-led coalition against Islamic State (IS) targets in Syria on Aug. 28. The development comes after much speculation about “foot-dragging” on the part of Turkey, and some confusing statements from Ankara and Washington in recent weeks concerning these negotiations.

The Turkish participation in air raids against IS targets in Syria has also failed to do away with lingering doubts concerning Turkey’s true motives. Critics argue that Ankara has the Syrian Kurds allied to the United States and affiliated to the Kurdistan Workers Party (PKK), which is outlawed in Turkey, in its cross hairs more than radical Islamic groups.

These critics, including a former senior Pentagon official, are claiming that Ankara is using the fight against IS, as well as its recent decision to allow the US-led coalition to use the strategic Incirlik Air Base and other Turkish bases, as a cover for this purpose. The buzz in Ankara’s diplomatic grapevine is that Turkey has yet to prove its sincerity in combating radical Islamic groups in Syria, despite its decision to join in coalition strikes against IS.

The overriding impression is that Ankara decided to join in these operations to relieve pressure from Washington, and other Western capitals, rather than as a result of an eager desire to combat IS. The Turkish decisions come shortly after US Secretary of Defense Ashton Carter openly criticized Turkey, saying its participation against IS was “overdue,” even though he argued somewhat diplomatically that he did not think “the Turks are dragging their feet.”

"It's a year into the campaign, but they're indicating some considerable effort now, including allowing us to use their airfields. That's important, but not enough," Carter said during a news conference at the Pentagon on Aug. 20. Carter also indicated that Turkey had to control its long borders with Syria and Iraq “more than it has been controlled over the last year."

A week after Carter's remarks, The New York Times published a scathing opinion piece by Eric Edelman, a former US ambassador to Turkey and undersecretary of defense for policy from 2005 to 2009, carrying the title “America’s Dangerous Bargain With Turkey.”

Edelman argued that the price of the agreement with Ankara for the US-led coalition to use Incirlik and other Turkish air bases “may be too high” in the end, because “the Turkish government’s recent change of heart and its sudden willingness to allow American access to the Incirlik base was driven by domestic political considerations, rather than a fundamental rethinking of its Syria strategy.”

He added that shortly after granting access to the base the “Turkish president, Recep Tayyip Erdogan, launched a wave of airstrikes on Kurdish targets, reigniting a conflict that had been on the road to resolution. To make matters worse, Turkey has struck hard at Syrian Kurds who have, until now, been America’s most reliable ally in fighting the Islamic State.”

Pentagon spokesman Peter Cook, nevertheless, said in a statement emailed to the media Aug. 29 that Turkish warplanes had been “fully integrated” into the coalition’s air operations, and that they “commend Turkey for its participation in counter-[IS] air operations alongside other coalition nations in the international campaign to degrade and ultimately defeat [IS].”

Former Foreign Minister Mevlut Cavusoglu — who relinquished his post last week when a provisional government was formed by Prime Minister Ahmet Davutoglu to see Turkey through early elections Nov. 1 — told Reuters on Aug. 24 that “technical talks had been concluded” that would enable Turkey to join the United States soon for “comprehensive” operations against IS.

This was followed by a statement from the Ministry of Foreign Affairs in Ankara on Aug. 28 indicating that “[Turkish] fighter aircraft, together with coalition fighter aircraft, began carrying out joint air operations as of yesterday evening against DAESH [Arabic acronym for IS] targets in Syria that also present a threat to our national security.”

The statement said, “The technical document regarding the participation of the Turkish air force in these operations was signed between Turkey and the US on Aug. 24, 2015," but did not provide any details, leaving a number of crucial questions in the air. It is not clear, for example, what the status of the Democratic Union Party (PYD), which has become the umbrella organization of the Syrian Kurds, and its military wing, the People's Protection Units (YPG), will be for Ankara during these operations.

Both of these groups are allies of the US-led coalition, having proved their worth at a time when there is no other viable force on the ground to fight IS. Turkey, however, considers the PYD and YPG as the Syrian extensions of the PKK, and lists them as terrorist organizations.

Washington has made it clear, though, that while it considers the PKK a terrorist group, it has no intention of so labeling the PYD or YPG. Therefore, it is not clear if Turkey will participate in coalition operations aimed at supporting YPG forces on the ground. Refusing to do so would limit the number of operations Turkey participates in and revive arguments about its sincerity in fighting IS.

A further disagreement between Ankara and Washington concerns who will run regions in northern Syria cleared of IS, even if it is provisionally until the Syrian crisis is resolved. Ankara does not want this to be the PYD, which Washington would clearly prefer to the Sunni groups in the Syrian opposition that Turkey is backing.

A source from the Foreign Ministry in Ankara, who is critical of the government’s Syrian policy, and who wished to remain anonymous due to his sensitive position, told Al-Monitor that the Justice and Development Party (AKP) — which held the reins of power in Turkey until it lost its parliamentary majority in June — has been driven by the singular desire to see the regions bordering Turkey fall into Sunni, and not Kurdish, hands.

Western diplomatic sources also believe Ankara is ultimately aiming at a “Sunni cordon sanitaire” in northern Syria, ostensibly for Syrian opposition forces, to keep Kurdish aspirations at bay. They say this is what really lies behind Turkey’s to-date unsuccessful push, so far, for “a safe zone” in the region.

One such source, who also wished to remain anonymous due to his sensitive position, said the ultimate test of Turkey’s sincerity will be its focus on IS and the continuity of its active participation in missions by the international coalition. The source told Al-Monitor, “One or two instances of participation and then holding back will merely fuel doubts concerning Turkey’s intentions. Turkey has to show in actions, not words, that it is determined and will remain so.”

There are those on the Turkish side who also express doubts about the sincerity of the Turkish government. Retired Ambassador Suha Umar, whose postings included Jordan, told Al-Monitor that the increasing pressure on Turkey by its allies to act was the real reason behind Ankara’s decision to open its bases to the US-led coalition, and eventually join the airstrikes against IS.

“Ankara came to this position out of helplessness, and not due to a proactive policy decision to act. My personal view is that the basic ideological orientation of the AKP government has not changed fundamentally, and remains the same with regard to Syria, as it does with regards to Egypt and Israel,” Umar said. He was referring to the AKP’s Sunni-based Islamist outlook.

These remarks clearly indicate that questions about Ankara’s real motives, and doubts about its sincerity in fighting IS, not to mention similar groups such as Jabhat al-Nusra — which some sources are claiming Turkey is still in contact with — are not restricted to foreigners.