Is Turkey really committed to fighting IS?

Turkey's striking harder at the PKK than at the Islamic State has raised concerns that it is pursuing the domestic political agenda of the Justice and Development Party to marginalize the Kurdish Peoples’ Democratic Party and gain sole control in early elections. 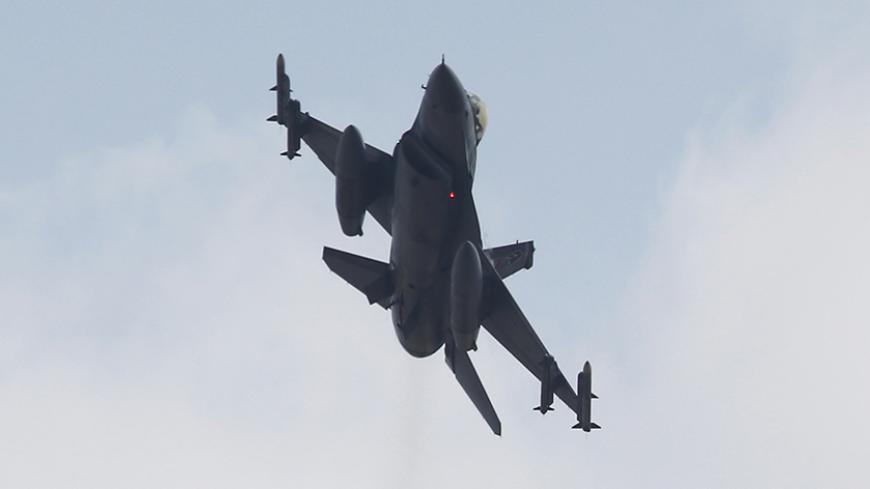 A Turkish F-16 fighter jet takes off from Incirlik Air Base in the southern city of Adana, July 27, 2015. - REUTERS/Murad Sezer

In joining the fight against the Islamic State (IS) — following the July 20 attack by the group in the town of Suruc that killed 32 people, most of them Kurdish peace activists, and another near the town of Kilis on July 23 that left a Turkish officer dead — Ankara has clearly moved in the direction long desired by its Western allies. The decision to open the Incirlik Air Base to the US-led coalition for use against IS provides tangible evidence that Turkey has turned a corner in this respect.

The Justice and Development Party (AKP) government of Prime Minister Ahmet Davutoglu has decided to fight terrorism on multiple fronts simultaneously, not only taking on IS, but the outlawed Kurdistan Workers Party (PKK) as well and to a much lesser extent the Revolutionary People's Liberation Party-Front, a left-wing terrorist group.

Ankara is bearing down heavily on PKK camps in northern Iraq (after deadly attacks by the group against Turkish policemen and soldiers). The disproportionate manner in which this is being done compared with the campaign against IS has raised questions about the AKP’s motives. Many argue that the government, egged on by President Recep Tayyip Erdogan, is trying to shore up its base of support by using the anti-Kurdish sentiments of nationalist Turks with a view toward regaining its pre-eminent political position in early elections, which could be held in November.

According to this argument, the AKP, to curry favor with the nationalists, wants to end the peace process it initiated in 2012 with the PKK through the mediation of members of the pro-Kurdish Peoples’ Democratic Party (HDP), which got 13% of the vote in the June 7 elections. The AKP’s coalition negotiations are ongoing, but there are indications that the party is under pressure from Erdogan, its “spiritual leader,” to prepare for early elections instead of working to form a government with another party.

Cengiz Candar, a prominent columnist for the daily Radikal and also a columnist for Al-Monitor, did not mince words in summing up suspicions in this regard. Suggesting that Erdogan is pushing for early elections, Candar, in his July 26 Radikal column, wrote, “If the AKP government is doing what it has not done for four years and engaging in daylong airstrikes against PKK targets in Iraqi Kurdistan, while announcing that these will continue, one has to be stupid not to realize that the aim is to criminalize the PKK and to marginalize the HDP by forcing it below the electoral threshold.”

Naim Baburoglu, a retired brigadier general and commentator on military matters, expressed a similar view. “It seems that Erdogan, who faced defeat in the general elections, is trying to win in early elections by using his position as commander in chief,” Baburoglu told Al-Monitor, indicating his belief that the campaign against the PKK appears to be based on domestic political considerations rather than any coherent military strategy.

Baburoglu also said that Turkey appears to be less enthusiastic in the fight against IS than against the PKK. “We saw images on television of Turkish soldiers guarding the border as IS militants dug trenches only 300 meters [984 feet] from them on the Syrian side. It is unimaginable that those soldiers would be allowed to look on like that if it was the PKK on the other side,” Baburoglu stated.

A senior Western diplomat in Ankara indicated that such opinions are gaining traction among diplomats and foreign observers in Turkey. “Turkey has a right to respond to the PKK, but the way this is being done is bound to generate doubts in the West as to what is really behind these Turkish airstrikes and to raise concerns that the AKP’s political agenda may diminish its resolve against IS,” the diplomat told Al-Monitor on condition of anonymity, due to his sensitive position.

There are already grumblings from Turkey’s NATO allies, most notably Germany, in this regard. German media reported that after the airstrikes against PKK positions in northern Iraq, German Foreign Minister Frank-Walter Steinmeier had warned his Turkish counterpart, Mevlut Cavusoglu, that peace talks with the PKK “should not grind to a halt,” adding that “the already complicated situation would thereby be made more difficult.”

NATO Secretary-General Jens Stoltenberg issued a similar warning, saying on Norwegian television, “For years, there has been progress to try to find a peaceful political solution. It is important not to renounce that … because force will never solve the conflict in the long term.” Stoltenberg was speaking on the eve of a July 28 meeting of NATO ambassadors in Brussels that had been called by Turkey. His comments suggested that any attempt by Ankara to solicit active military support from its allies against the PKK would fail.

Remarks by Erdogan to reporters July 28, before flying to China on an official visit, were intended to ease heightened Western concerns. He said it was not possible to continue with a peace process that had been abused by the PKK. Answering a question about calls from nationalist quarters to have the HDP outlawed as well, Erdogan — whose party has faced similar calls in the past — said he was against this, stating, “I don’t think it is correct to close down parties. But I say that the leaders of this party should be held to account as individuals.”

The United States finds itself in a delicate position, treading a cautious line of backing Turkey’s fight against the PKK while supporting the Kurdish peace process without endangering the advantage secured by Ankara’s fight against IS.

National Security Council spokesman Alistair Baskey was quoted in the Turkish media as saying in a July 25 press statement that the United States “respected its NATO ally Turkey’s right to self-defense” against the PKK. He also said, “We call on the PKK, which the United States has designated a terrorist organization, to renounce terrorism and re-engage in talks with the government of Turkey,” before going on to urge “de-escalation by both sides” and to encourage “everyone to remain committed to the peaceful ‘solution process’ to bring about a just and sustainable peace for all Turkish citizens.”

Ankara is unlikely to get much support against the PKK from the United States beyond such lip service, especially if the impression takes hold that Turkey is using the fight against the PKK to roll back the political success of the HDP. What is certainly not in doubt is that Washington will not allow Turkey to target the Kurdish Democratic Union Party (PYD) in Syria and its military wing, the People’s Protection Units (YPG), who are currently allied with US forces against IS.

Ankara claims the PYD and its militia are extensions of the PKK and has listed them as terrorist organizations. Washington has not done the same. Ankara is concerned that the Syrian Kurds will establish an autonomous region along Turkey’s border and encourage Kurdish separatism among PKK supporters in Turkey. Ultranationalist politicians want Turkey to hit the PYD and YPG, along with the strikes against the PKK and IS, but the Davutoglu government clearly understands that this would be crossing a red line.

Baburoglu said Turkey’s ill-considered strategy against the PKK in northern Iraq, apparently motivated more by domestic politics than foreign policy considerations, could result in consolidating Western support for the PYD in Syria and expedite the establishment of an autonomous Kurdish zone that’s friendly to the West.

With Erdogan and the AKP so focused on the PKK, whether for political reasons or not, will Ankara remain on course in terms of combating IS or will it let the matter drift to the background, knowing its allies will not make too much of it, having secured a strategic advantage by being allowed to use Incirlik? This is the question now being asked.