The peace process between Turkey and the Kurdish group is on hold now, thanks to a perfect storm blown by the Kurdistan Workers Party's militancy, the toxic impact of the Syrian civil war and grand political ambitions in Ankara. 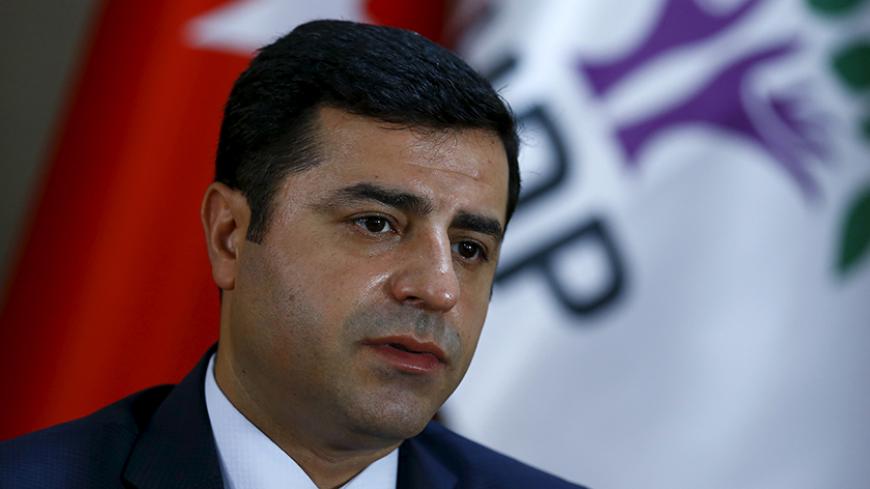 Deputy Prime Minister Yalcin Akdogan, a senior name in the ruling Justice and Development Party (AKP), unwittingly created a political scandal with his July 29 remarks on TV. His focus was the re-escalated violence between the Turkish government and the Kurdistan Workers Party (PKK), a terrorist group by the definition of both the Turkish and US governments. Akdogan expressed sadness that the peace process that began with the PKK in early 2013 had failed, and he was holding not just the PKK, but also the Peoples’ Democratic Party (HDP) responsible for the failure.

The scandal arose from a detail Akdogan gave while explaining exactly when the HDP disillusioned the government — or, more precisely, President Recep Tayyip Erdogan: When Selahattin Demirtas, the charismatic leader of the HDP, took a bold stance against Erdogan’s great political ambition of an all-powerful presidential system. Demirtas had made his stance clear during his campaign for the June 7 elections by reiterating a simple sentence: “Erdogan, we will not allow you to become president.” According to Akdogan, it was this very sentence that began to tear the peace process apart.

He said, “‘We will not allow you to become president.’ This was actually a provocation. Was their rival in the elections the president? No. Why on earth would a party stake its campaign on targeting a person who is not the leader of a political party? This was a major provocation. This was the move that started the real tension.”

The catch, of course, was that while the peace process was promoted to Turkish society with the humane slogan, “Don't let the mothers cry anymore,” it also had an ulterior political motive. Erdogan would give the Kurdish movement what it wanted, and in return the Kurdish movement would give Erdogan what he wanted: crucial support in parliament to pass a whole new constitution with a tailor-made presidential system. But when the HDP presented itself as an obstacle to Erdogan, things changed. Demirtas' “real tension” began.

Now, does this mean that Turkey’s much-hailed peace process with the PKK failed merely because of Erdogan’s temptation to seize more power? That might sound compelling, especially to opposition ears, but the truth is a bit more complicated than that.

To give some background, the peace process began with covert talks between the AKP government and the jailed leader of the PKK, Abdullah Ocalan, who apparently had decided to transform himself in the later part of his life from terrorist to peacemaker. Hence Ocalan, from his prison cell, called on his fighters in March 2013 to abandon their armed struggle against Turkey in return for political reforms. Accordingly, the PKK’s armed militants would leave Turkey for Iraqi Kurdistan, and the cease-fire would allow the government to make key legal changes and constitutional amendments.

However, the PKK did not keep this promise. Its armed militants did cease their fire, but they never fully left Turkey. Also, thanks to the government’s desire to avoid any conflict, the PKK began imposing its own law and order in certain southeastern provinces, collecting taxes from businesses, setting up courts to punish dissidents and even establishing checkpoints. The tension between the PKK and Islamist Kurds flared, as the latter complained of being abandoned by the government to the PKK’s mercy.

The civil war in Syria made everything worse. The PKK and its base strongly identifies with the Democratic Union Party (PYD), the main armed Kurdish group in northern Syria that fights the Islamic State (IS). Unsurprisingly, the secular PYD quickly became the darling of the West, while Ankara worried about a growingly empowered Kurdish movement that it sees as a terrorist organization. The PKK/HDP’s response was to condemn the AKP as the supporter of the jihadists in Syria, especially IS. The AKP took great pains to explain that it condemns IS as a terror group, but many, including the PKK/HDP, were not convinced.

That is why when an IS suicide bomber killed 32 pro-Kurdish activists in Suruc on July 20, the PKK blamed not just IS but also the Turkish government. It ended the 2½-year cease-fire by assassinating Turkish policemen and soldiers and firing rockets at military posts. In the past two weeks, the PKK killed almost 20 personnel from the Turkish security forces. Turkey’s right to defend itself in the face of such a violent campaign should be granted, as noted by UN Secretary-General Ban Ki-moon. Meanwhile, the Western media should do a reality check regarding its rosy image of the PKK and its heated headlines about the "massacre" of Kurds by Turkey. The PKK does not represent all Kurds, as one of the prominent critics of the group, Iraqi Kurdistan President Massoud Barzani, has pointed out. (Barzani recently accused the PKK of “arrogance” and undoing Ankara’s “positive attempts” for peace.)

In other words, the Turkish government is not wrong to condemn the PKK’s violence and apply security measures to crack down on it. However, Erdogan’s political ambitions do complicate the scene by adding an additional problem: The grudge against the HDP for blocking the presidential system. That is probably why Erdogan is now not only taking measures against the PKK, but also pushing for the imprisonment of some key HDP politicians, including Demirtas. If that works, then the HDP may lose face as the party of terrorists, giving an advantage to the AKP in the elections that Erdogan wants to hold later this year.

In short, the 2½-year-old peace process is on hold now, thanks to a perfect storm blown in by the PKK’s militancy, the poisoning impact of the Syrian civil war and grand ambitions in Ankara. If Turkey is lucky, this can still be a temporary escalation of violence, and the peace process can roll on again after a brief war of attrition. Otherwise, the peace process may prove to be a temporary pause in Turkey’s almost century-long war with Kurdish insurgents, the PKK being only the latest group.