Is Turkey poised to invade Syria?

The Turkish military is concerned a military engagement in northern Syria has no international support. 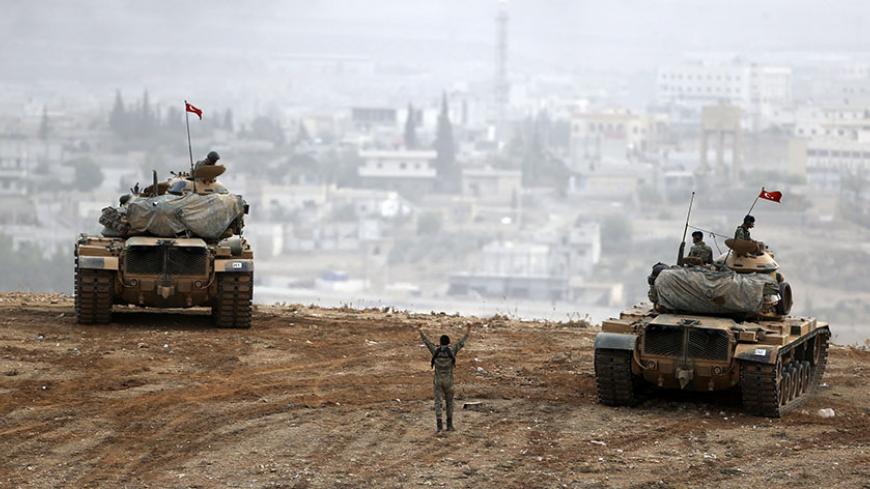 Turkish army tanks take position on top of a hill near the Mursitpinar border crossing in the southeastern Turkish town of Suruc in Sanliurfa province, Oct. 11, 2014.

In his first public statement following the June 7 general elections that dashed his hopes of becoming Turkey’s sole leader, President Recep Tayyip Erdogan blasted the Syrian Kurds, and their nominal allies the United States, after they defeated the Islamic State (IS) in the northern Syrian town of Tell Abyad.

“Look at the West that is striking Arabs and Turkmens in Tell Abyad and regretfully placing the terrorist groups PYD [Democratic Union Party] and PKK [Kurdistan Workers Party] in their place. … How can we consider this West to be honest?” Erdogan said, referring to the air support the United States was giving the Syrian Kurdish PYD fighting against IS.

The PKK has been waging a long-standing armed campaign for Kurdish autonomy in Turkey, for which it has been designated as a terrorist group by Ankara and Washington. It is also fighting against IS in northern Syria.

Erdogan upped the ante June 27 and said Turkey would not allow any attempts to establish a Kurdish entity in northern Syria. “We will never allow a state to be established in northern Syria and in the south of our country. No matter what the cost, we will continue our struggle in this regard,” Erdogan said.

He added that Turkey would allow attempts to change the region’s demography, a reference to claims that the PYD is ethnically cleansing Tell Abyad, and other areas captured from IS, of Arabs and Turkmens. Erdogan’s remarks were followed by a slew of reports in the media indicating that the Turkish military acting on orders from the government had prepared contingency plans to enter Syria and establish a buffer zone along the Turkish border 100 kilometers (62 miles) long and 10 to 15 kilometers (6 to 9 miles) wide.

These reports cited officials who argue that this will not only meet Turkey’s security requirements, but also establish a safe haven for Syrian refugees who continue to flood into Turkey. They also say it will enable Turkey to contribute more effectively to the fight against IS, thus belying claims in the Western media that Ankara is aiding such groups.

Given Erdogan’s angry remarks, many believe this intervention’s main purpose is to prevent Syrian Kurds from establishing a contiguous zone in the region. Turkey’s buffer zone would fall between the Kurdish town of Kobani and Jarablus to its west, which the Kurds want to capture from IS.

Although it is opposed to any Kurdish entity along Turkey’s borders, the Turkish military is said to be wary of being dragged by the government into a military adventure in Syria. Reports from the chief of general staff’s office leaked to the media indicate that the top brass wants Ankara to consider the international ramifications of an engagement in a complex and multilayered conflict.

Serpil Cevikcan, a journalist for Milliyet who is in close contact with the military, has cited military sources who say they are ready to carry out any order from the government, but express concern about the diplomatic consequences. “The chief of general staff’s office has conveyed its view that for such a directive to be successful, the political, military and diplomatic infrastructure has to be established in such a way as to allay all risks that may emerge,” Cevikcan wrote in her column.

She said the military wants the matter to be discussed not just with the United States, but also with Russia and Iran and the regime in Damascus, which seems unlikely given that Ankara has burned all its bridges with the Syrian regime. It is also a foregone conclusion that Moscow and Tehran would oppose a buffer zone established by Turkey in Syria, having expressed their opposition to this in the past.

Retired Ambassador Umit Pamir, a member of the Global Relations Forum, also believes that entering Syria without approval from the United Nations, or the approval of a strong coalition of countries, is risky. He nevertheless believes that Moscow and Tehran can be convinced of the merits of such an operation if it is mounted against IS. But this requires Ankara to prioritize the fight against IS, which it has not done to date.

“Turkey has to work with an international coalition, otherwise it will result in serious complications,” Pamir told Al-Monitor.

Washington, for its part, appears unenthusiastic about a step by Turkey that many believe would be against the Kurds. Asked about the buffer zone Turkey is said to be planning in Syria, Mark Toner, a deputy spokesman for the State Department, told reporters June 29 that Washington’s position had not changed.

“The creation and enforcement of a no-fly zone or any other military enforced zone presents significant challenges. … They include military, financial, but also humanitarian challenges that we need to obviously consider in the broader context,” Toner said. He added that they “don’t have any ground truth” on the reported plans by Turkey. “All we’ve seen, frankly, are press reports,” he said.

Deniz Zeyrek, a veteran journalist who works for Hurriyet, indicates that the military is also concerned about mounting an operation on the orders of a caretaker government that lost its parliamentary majority in the June 7 elections. “The armed forces say that when the government’s directive is carried out there will have to be responsibility for the negative situations and risks that may emerge, and expect this to rest with the new government,” Zeyrek wrote June 27.

Retired Brig. Gen. Armagan Kuloglu, a commentator on military matters, is among those who see no advantages to an operation in Syria. “Three objectives are mentioned for such an operation: to prevent IS or the PYD from gaining control of areas bordering Turkey, and to establish a safe haven for refugees. But we have multiple enemies here, and it is not clear who we are supposed to fight,” Kuloglu told Al-Monitor. He also pointed to complications if international support for this operation is not obtained.

These considerations appear to have little sway on Erdogan and journalists who act as his unofficial spokesmen. Ibrahim Karagul, the editor-in-chief of Yeni Safak, who believes that the PYD is more dangerous than IS, said there is a grand design to establish a Kurdish corridor to carry oil from Kurdish northern Iraq to the Mediterranean over Syria.

“The aim is to make a lasting change to the map of the entire region and to restrict countries like Turkey that have an extraordinary power to influence developments. … If successful, this will be the biggest trap set for Turkey since the invasion of Iraq,” Karagul claimed, arguing this must be prevented at all costs.

Meanwhile, there are those who say Erdogan does not have the authority to declare what amounts to a “casus belli,” and point out that this authority rests with the parliament. Ibrahim Kaboglu, a professor of constitutional law, says that under the present constitution the president can only give such a directive if parliament is not sitting and there is a sudden attack on the country. “This is not the case today and so the power to give such orders rests with the Grand National Assembly,” Kaboglu told the daily Cumhuriyet.

The June 7 elections produced a hung parliament that is unlikely to authorize such an invasion given that opposition parties are opposed to this. Opinion polls have also shown consistently that a large portion of the Turkish public is opposed to any entanglement in Syria.

There are also those who claim that Erdogan wants an intervention in Syria to divert attention away from the Justice and Development Party’s election losses and to engineer a situation suited to his political ambitions.

Such speculation aside, the National Security Council — an advisory board headed by the president and comprising the prime minister, relevant ministers and senior military officials — made a statement after it met June 29 that Turkey is not on the verge of any immediate action with regard to Syria. It merely indicated Turkey was “following developments in Syria with concern.”

Given the confusing and seemingly intractable situation in Syria, this appears to be all that Ankara can do at the moment if it does not want to enter a fray from which it is unlikely to extricate itself unscarred.