The United States remains opposed to a no-fly zone in northern Syria; Masrour Barzani calls for "amicable divorce" for the Kurdistan Region of Iraq; Jacky Hugi writes that Israel should back the Syrian government "at any price." 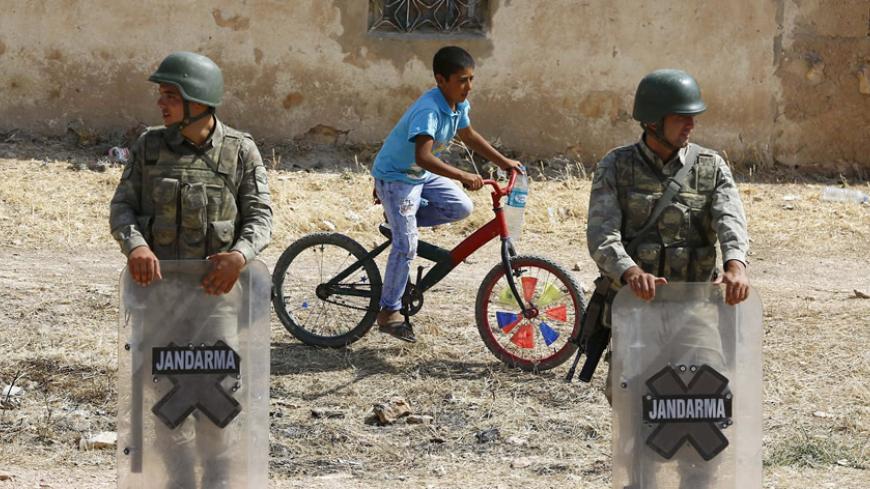 Semih Idiz reports this week on “a slew of reports in the media indicating that the Turkish military acting on orders from the government had prepared contingency plans to enter Syria and establish a buffer zone along the Turkish border 100 kilometers (62 miles) long and 10 to 15 kilometers (6 to 9 miles) wide.”

Turkish President Recep Tayyip Erdogan has intensified his campaign for a buffer zone since Syrian Kurdish and rebel forces defeated the Islamic State (IS) in Tell Abyad on June 15. He warned June 27, “We will never allow a state to be established in northern Syria and in the south of our country. No matter what the cost, we will continue our struggle in this regard.”

The US-led coalition backed the ground campaign by Syrian Kurdish and rebel groups against IS with airstrikes. Pentagon spokesman Col. Steve Warren said June 16 that the liberation of Tell Abyad from IS was “a great example of the combination of airpower — devastating airpower — along with seasoned, trained and capable ground forces."

Turkish officials who support Erdogan claim a buffer zone “will not only meet Turkey’s security requirements, but also establish a safe haven for Syrian refugees who continue to flood into Turkey. They also say it will enable Turkey to contribute more effectively to the fight against IS, thus belying claims in the Western media that Ankara is aiding such groups,” Idiz writes.

But the controversial plan does not have the backing of Turkey’s military, according to Idiz: “Although it is opposed to any Kurdish entity along Turkey’s borders, the Turkish military is said to be wary of being dragged by the government into a military adventure in Syria. Reports from the chief of general staff’s office leaked to the media indicate that the top brass wants Ankara to consider the international ramifications of an engagement in a complex and multilayered conflict.”

Metin Gurcan writes that Erdogan has sought to weaken the military establishment’s resistance to Syrian intervention: “Intelligence reports reaching Ankara after the fall of Tell Abyad said the PYD [Democratic Union Party] was now turning westward to reach the last Kurdish canton, Afrin, and that the final goal of the PYD was to create a Kurdish corridor that will abut Turkey and reach the sea. Those reports naturally encouraged AKP leaders to disregard any restraints stemming from the military’s realism.

“Another factor that weakened the 'braking mechanism' was the crisis of confidence the Turkish military has been having with the US plans for Syria. Security officials who recently spoke to Al-Monitor in Ankara pointed to mounting tension between the US and Turkish security bureaucracies. These sources insist that Ankara’s worst fear is for the United States to reach an understanding with the Syrian regime to smash the Islamic State and hand over areas it vacates to the PYD. According to these officials, the Kurdish corridor project with its 'Made in the USA' tag has been testing the limits of the traditional alliance between Turkey and the United States.”

The United States has so far rejected a buffer or no-fly zone in Syria. US Defense Secretary Ashton Carter said May 6 before Congress that no-fly zones are “a difficult thing to contemplate” and enforcing them requires “a major combat mission.” State Department spokesman Mark C. Toner said June 29, “We’ve actually seen reports out of Turkey as well about these so-called no-fly or military-enforced zones. For our part, our position hasn’t changed. … We’ve discussed this many times and addressed it from this podium. The creation and enforcement of a no-fly zone or any other military enforced zone presents significant challenges. We’ve been very upfront about that.”

Fehim Tastekin writes that, in addition to the reservations of the Turkish military and the opposition of the United States, the formation of a new Turkish government may also hinder Erdogan’s effort to implement a buffer zone: “It will not be possible to sustain the Syrian policy when a coalition government is formed in Turkey, so Erdogan is dragging Turkey into an adventure in the transition period. … Erdogan wants to win the elections he lost, this time as the commander in chief. Surely he must be aware that this calculation includes deadly risks such as clashing with the Kurds, fighting with the Syrian army and provoking the IS nightmare against Turkey.”

Barzani: "We have higher expectations from Turkey"

Masrour Barzani, chancellor of the Kurdistan Region Security Council and eldest son of Iraqi Kurdistan President Massoud Barzani, told Al-Monitor, “The Turks should be more concerned about having [IS] on the borders of Turkey. Indeed, Turkish reaction to this should be one of relief that Kurds, as friends of the Turks, are controlling the border rather than [IS], which is the enemy of the entire world."

In an interview with Amberin Zaman, Barzani said, “We have higher expectations from Turkey. They should be doing a lot more than they are doing now. They are members of NATO, so they have to work out a system with the rest of the coalition members of how Turkey can best contribute. We are concerned by the deteriorating situation in Syria but also by the deterioration in the Kurdish peace process in Turkey. What we would love to see happen is for [IS] to be defeated and for the peace process to be expedited so that we can once and for all solve this problem of the Turks and Kurds inside Turkey.”

Barzani alluded to tensions between the Kurdistan Regional Government and the Syrian PYD, which is linked to the Kurdistan Workers Party (PKK) in Turkey, over the role of the People’s Protection Units (YPG, the military wing of the PYD), in Sinjar:

“Sinjar is deep inside our territories. The problem there [the IS occupation] was solved with the help of coalition airstrikes but primarily by the peshmerga forces. Sinjar is a Kurdish territory inside Iraq and the PYD [the YPG’s political arm] is a guest exactly in the same way that our peshmerga forces were when they went to support them in Kobani, but then returned. It is the expectation of the people of Iraqi Kurdistan that foreign fighters eventually leave and go back to where they came from.”

Barzani added, “The PKK has no role to play. They should pull out and they must because the people of Sinjar will determine their own future and this is Iraqi Kurdistan. Would the PKK be happy if a Kurdish political party inside Iraq meddled in the affairs of Diyarbakir or Mardin? But there are parties inside the Kurdish community within Turkey that definitely should be allowed to play a role. We believe in a multiparty system. PYD-PKK elements must pull out when the situation gets back to normal … this is Iraqi territory and they must leave. And this is one of the reasons why we are so eager to see the Kurdish peace process inside Turkey succeed. We hope this problem will be resolved peacefully."

Barzani said that he does not see the future of Iraqi Kurdistan linked to Iraq: “I don’t think Iraq is a feasible project. It's time for the world to realize that the failed system needs to be reviewed. Repeating the same mistake and believing it will give you a different result is insanity. This is exactly true for Iraq. How many times have we tried to support a united, strong central government in Baghdad? It didn’t work. Kurdistan is controlled by the Kurds, the Sunni areas are controlled by [IS] and the Shiite areas are controlled by Shiite forces and the Popular Mobilization Units. Prime Minister [Haider al-] Abadi has been making a big effort to fix things. But the Iraqi government must accept this reality and look for other solutions. We are not pushing for forced separation. We are talking about an amicable divorce.”

Jacky Hugi argues that the recent unrest among Israel’s Druze citizens should be considered another warning of the threat to Israel from the rise of jihadist groups in Syria:

“What Israel should learn from these events is that it must strive for the survival and bolstering of the current regime at any price. Anyone who wonders why is invited to look at neighboring Iraq or distant Libya. What’s happening there is likely to happen in Syria after President Bashar al-Assad.”

Hugi adds, “The Baath regime was cruel to its citizens and robbed them of basic rights, and its leaders should pay the fullest price so that justice is served. But in choosing between one bad thing and another, the balance tips toward the regime. The Israeli security establishment should gradually abandon its emerging alliance with the Syrian rebels and elegantly work with its friends in the West to stabilize Damascus as much as possible. It must not fortify the regime’s enemies, develop friendly relations with them nor weaken its rule. The bitter consequences of this tactic could hit Jerusalem like a boomerang.

"The survival of the Damascus regime guarantees stability on Israel’s northern border, and it is a keystone to its national security. The Syrian regime is secular, tacitly recognizes Israel’s right to exist and does not crave death. It does not have messianic religious beliefs and does not aim to establish an Islamic caliphate in the area it controls. Since Syria is a sovereign nation, there is an array of means of putting pressure on it in case of conflict or crisis. It’s possible to transmit diplomatic messages, to work against it in international arenas or to damage its regional interests. If there’s a need for military action against it, there’s no need to desperately look for it amid a civilian population and risk killing innocent civilians.”