If the new Turkish government fails to take advantage of its electoral mandate to make necessary revisions in foreign policy, events on the ground might force its hand anyway. 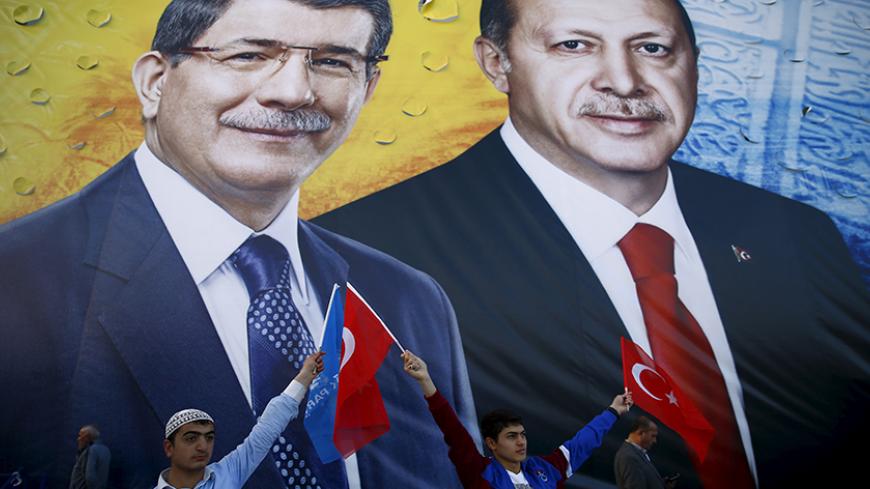 Supporters of Turkey's Justice and Development Party in the central Anatolian city of Konya hold national and party flags on Oct. 30, 2015, as they stand in front of a banner showing Prime Minister Ahmet Davutoglu (L) and President Recep Tayyip Erdogan. - REUTERS/Umit Bektas

The Justice and Development Party’s (AKP) Nov. 1 landslide electoral victory stunned secular and liberal Turks, not to mention international observers. Even AKP officials admit they were not expecting such a turnout after losing their parliamentary majority in the June elections. One of the questions now being asked is what the victory, and the manner in which it reinforces President Recep Tayyip Erdogan’s position, will mean for Turkey’s foreign policy at such a critical moment in the Middle East, especially in regard to Syria.

Initial assessments by some Turkish analysts and international observers are not positive. They believe the AKP has little reason to change its policies after obtaining a strong mandate from the public. Others, however, think the mandate will provide Prime Minister Ahmet Davutoglu's government room to maneuver, enabling it to act more pragmatically on issues like Syria and ties with Egypt.

Ersin Kalaycioglu, professor of political science at Istanbul’s Sabanci University and a well-known political commentator, believes “there is no chance” that the AKP will change tack. “Did the AKP lose any votes because of the violence in the country, the economic crisis, bomb attacks and so on? It did not. So, why should it change its strategy?” Kalaycioglu spoke on CNN Turk after the election results became apparent.

Wolfango Piccoli, managing director with Teneo Intelligence who covers political risk in Turkey, is of the same opinion. “Now more than ever, the AKP is left with no real incentive to change course. This counts for economic policy as such, but also pertains to Erdogan’s general approach to politics,” Piccoli wrote in an assessment made available to Al-Monitor.

Erdogan’s uncompromising stance on Syria remains one of the issues that has deeply divided Turkey's political parties. The Republican People's Party (CHP), which will remain the main opposition, has been pushing a line predicated on the need for dialogue with the Bashar al-Assad regime to resolve the Syrian crisis. The idea of talking to Assad remains abhorrent to Erdogan and the AKP. Many say Ankara is also unlikely to alter its position on Egypt’s president, Abdel Fattah al-Sisi, who became one of Erdogan’s regional archenemies after toppling the elected Islamist president, Mohammed Morsi. It is generally believed that prospects for improved relations with Israel are also close to nil.

Mehmet Yegin, researcher with the Ankara-based International Strategic Research Organization, is not so pessimistic. He believes the elections have freed Davutoglu’s hands and will enable him to take a more flexible approach to foreign policy issues. “I expect change in foreign policy and a move toward more pragmatic approaches,” Yegin told Al-Monitor, indicating that the hold domestic politics has had over foreign policy issues will now relax as a result of the strong mandate the AKP received.

“The government has four years now to make pragmatic changes and to explain the need for these to the public,” Yegin said, adding, for example, that Turkey clearly needs a new approach to relations with Egypt given the key position that country holds in the Middle East. Yegin conceded, however, that the AKP might use its mandate to cling to old policies. “I am thinking rationally and assuming the government will move pragmatically, but that may not be the case,” he said. Yegin, nevertheless, is throwing his weight behind the possibility of change.

Erdogan’s abrasive anti-Western tone is unlikely to dissipate. In fact, it may even increase after the assessments of the election monitors dispatched by the Council of Europe and the Organization for Security and Co-operation in Europe. “This campaign was unfair and characterized by too much violence and fear,” according to Andreas Gross, the Swiss head of the mission sent by the council.

This is the kind of remark that raises Erdogan’s anti-Western hackles. Western monitors also said they were harassed and obstructed from doing their jobs by local AKP officials and party supporters at some polling stations, a reflection of the general negative sentiment toward Westerners in the AKP.

Erdogan’s response to Western critics of the elections was quick. “Why is the world [i.e., Western] media so concerned with our country and not their own? Why don’t they respect the national will? This will elected Erdogan with 52%, and they still don’t respect this,” he said, referring to the 2013 presidential elections. “Now a party came to power with nearly 50% of the vote. … The whole world has to respect this. But I don’t see this maturity in the world,” he added, reflecting the xenophobic attitude prevalent among his supporters.

All indications are that Erdogan will continue to believe in a Western conspiracy against him and the AKP and aimed ultimately at undermining Turkey’s success. Despite Erdogan’s political fixations, however, there are those who argue that developments, especially on Syria, will force Ankara to revise its positions.

Huseyin Bagci, head of the Department of International Relations at Ankara’s Middle East Technical University, said that even today, Turkey’s policy with regard to Syria is being guided by the positions of the United States and Russia. “With Iran now also part of the talks on Syria, Turkey’s previous position has become unsustainable. Ankara clearly has to do a U-turn, but is searching for a political formula that suggests to the public that it is not doing so,” Bagci told Al-Monitor.

When it comes to Turkey’s dormant ties with the European Union and strained relations with individual European countries, there are indications that the refugee crisis emanating from Syria will work to Erdogan’s advantage. Soli Ozel, who lectures on international politics at Istanbul’s Kadir Has University and writes a column for the daily Haberturk, argues that the determining factor in Turkey’s ties with Europe is the refugee crisis and Europe’s need to cooperate with Ankara to resolve it.

“There is currently horse trading going on with the EU over this issue that will determine who gets what and who gives what,” Ozel told Al-Monitor. He was referring to the liberal visa regime being negotiated for Turks in return for Ankara signing an agreement to allow illegal migrants to be sent back to Turkey if that is where they came from.

Ozel suggested that this represents less than honorable behavior on the part of Europe, which seems to have cast aside its principles for the sake of its own interests by not criticizing Erdogan for his authoritarian and undemocratic ways.

European diplomats, however, indicate that the need for cooperation with Turkey on pragmatic issues will not push forward Ankara’s bid for EU membership or prevent criticism of undemocratic developments in Turkey. They point to the annual “Progress Report” due to be released by the EU Commission that criticizes Turkey and Erdogan strongly in regard to undemocratic developments.

“You must not confuse two separate issues with one another. We need to cooperate with Ankara on real issues, but this does not mean we will look away while it violates democratic principles or speed up its EU membership process because of our need to cooperate,” said a diplomat speaking on condition of anonymity.

Erdogan, however, is not at present particularly interested in Ankara’s membership bid, and many argue he is using Europe’s need for Turkey’s cooperation over the refugee crisis to his political advantage. German Chancellor Angela Merkel is still under fire at home over her visit to Turkey in October to hold talks with Erdogan on the topic. The criticism painted it as an unnecessary gift to Erdogan by a key European leader on the eve of elections, providing him validation that translated into support for the AKP.

The bottom line is that the jury remains out on what influence the election results will have on Turkey’s foreign policy. The most likely outcome is that if Ankara avoids long overdue revisions, they will nevertheless come to pass due to the sheer force of circumstances.