Semih Idiz writes that while Turkey has intensified its anti-Western rhetoric to curry ties with the Arab and Islamic world, it is still invested in deepening ties with NATO and furthering its bid for EU membership. 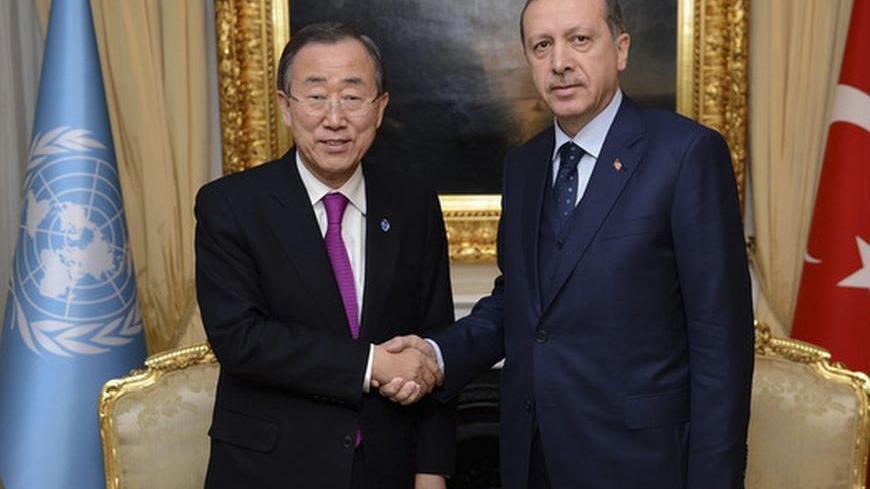 Turkish Prime Minister Recep Tayyip Erdogan must have been surprised upon hearing remarks by the Nobel Committee last week relating to his ruling Justice and Development Party (AKP) as the European Union was being awarded the Nobel Peace Prize.

Referring to Turkey as a country that is important for world peace, the Nobel Committee also appeared to suggest that the AKP is on course in terms of Ankara’s EU bid.

“After the new government, headed by the AKP, won a clear parliamentary majority, the aim of EU membership provided a guideline for the process of reform in Turkey. There can be no doubt that this has contributed to strengthening the development of democracy there," declared the chairman of the Nobel Committee, Thorbjørn Jagland.

The real surprise, however, is that these remarks come when EU reforms in Turkey have seriously stalled and Ankara’s ties with Brussels are caught in the doldrums. This year’s progress report, prepared by the European Commission for candidate countries, was in fact the worst for many years, underlining Ankara’s lack of democratic progress.

The evidence provided for this included the large number of journalists in prison and the judicial irregularities relating to politically sensitive trials against retired and active soldiers, journalists and academics who are alleged to have plotted to topple the AKP by illegal means.

In the meantime, Erdogan not only seems to have dropped Turkey’s EU bid from his agenda, but is also seen on many occasions to be wallowing in anti-Western sentiments as he cold-shoulders Europe. This was also apparent in September, during the AKP congress, where the foreign dignitaries included prominent Islamists such as Hamas’ Khaled Meshaal and newly elected Egyptian President Mohammed Morsi.

On the other hand, no European leader was present except former German chancellor Gerhard Schroeder, who nevertheless appeared to be there more for his connections to the Russian Gazprom company than as a former European leader.

The negative attitudes of certain European countries toward Turkey have also been instrumental in ensuring a drop in public Turkish support for EU membership. France under Nicolas Sarkozy, for example, argued that Turkey is not European, and therefore can at best have only a “privileged partnership” as opposed to full EU membership.

Sarkozy went on to block five crucial chapters in Turkey-EU negotiations, arguing that these pertained to full membership. The blockage remains in place, although there is some talk that President Hollande may rescind the decision. The “privileged partnership” argument is also shared by German Chancellor Angela Merkel.

But Germany has not blocked Turkey’s membership talks the way France has, on the grounds that Berlin remains committed to agreements signed by past governments.

Germany nevertheless insists that negotiations with Turkey remain open ended, and may not automatically result in full membership even if these are concluded successfully.

Turks take this and the position of France as expressions of European bad faith, given that the EU’s decision to start membership talks with Ankara was made unanimously.

Meanwhile, the decision by the EU to admit Cyprus — known to Ankara as “Greek Cyprus” since it excludes Turkish Cypriots — as a full member was taken by Turks as a further sign of European bad faith.

But Greek Cypriots were still awarded full EU membership while Turkish Cypriots ended up with nothing, so the feeling among Turks today is that the EU will always support a Christian country against Muslim Turkey, regardless of which side does the right thing as far as Europe is concerned.

In the meantime Egemen Bagis, Turkey’s EU minister, lashed out at this year’s progress report, saying it was insignificant for Turkey, while a key AKP deputy scoffed at the same report and symbolically threw it in the trash on live television.

But President Abdullah Gul has been consistently exhorting the government to remain committed to EU reforms. His argument has been that Turks stand to gain whether there is EU membership in the end or not, because many of the structural reforms that are prerequisite for membership are vitally necessary for Turkey anyway.

Babacan also told a recent Financial Times Turkey Summit that the answer to the question of whether the EU remains interested in Turkey is “a big yes.” Recent developments in the Middle East, when combined with the critical mass Turkey has gained economically, politically and strategically makes this inevitable, of course.

Even Germany, whose government has been standoffish in terms of Turkish EU membership, is convinced for a host of reasons that Turkey must remain anchored to Europe. Foreign Minister Ahmet Davutoglu, on the other hand, continues to say that his government remains committed to full EU membership, given half a century of political interaction between the Turkey and the Union.

These remarks appear out of touch with Erdogan’s attitude toward the West in general and EU in particular, of course, but the fact is that regional developments have also forced the AKP government back to the Western fold and toward its traditional foreign-policy orientations.

Asking NATO to deploy Patriot batteries against possible ballistic-missile attacks from Syria is a case in point. Prior to that, Turkey also agreed to host the radars of NATO’s missile-defense shield, despite anger from Iran. That alone showed that for all of Erdogan’s anti-Western bombast, it is still difficult to move Turkey away from the West and toward strategic political, economic and military ties the Islamic world.

Thus, while Erdogan plays to the gallery in Turkey, where anti-Western sentiments always go down well, Ankara seems unwilling in the final analysis, especially given the turmoil in the Middle East, to scuttle its traditional and vital connections with the West.