Europe’s need for Turkey’s cooperation in the refugee crisis is forcing EU leaders to moderate their tone against Erdogan’s undemocratic ways. 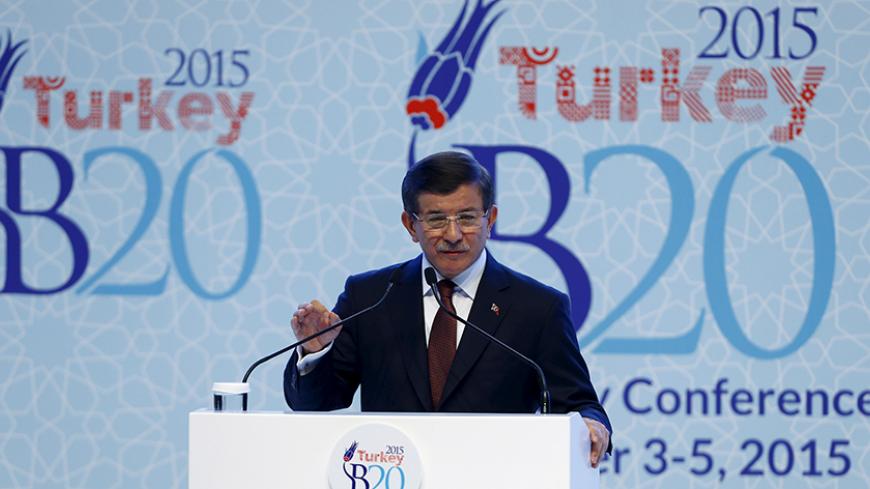 Eyes will be on the Turkish resort city of Antalya on Nov. 15 where an impressive list of world leaders, headed by US President Barack Obama, Russian President Vladimir Putin and Chinese President Xi Jinping, will gather at the 10th meeting of G-20 countries for talks held under the shadow of the Syrian crisis. Turkey, which has held the G-20’s term presidency since December 2014, is hosting the summit.

The gathering will provide President Recep Tayyip Erdogan an opportunity to engage in some international grandstanding after he strengthened his hand following the recent electoral victory of the Justice and Development Party (AKP), which he once led.

The official agenda includes global economic issues of vital importance to Turkey, as it’s the 17th largest economy in the world. But the Syrian civil war, the refugee crisis and the need to fight the Islamic State (IS) are expected to dominate the bilateral talks on the sidelines, as well as the discussions during the official dinner to be hosted by Prime Minister Ahmet Davutoglu.

Erdogan is expected to emphasize the Syrian crisis during his opening address. He will no doubt be speaking more self-assuredly than usual, not only because of the AKP’s recent electoral victory, but also because the refugee crisis has left Europe in need of his assistance.

He received the red-carpet treatment in Brussels in October. EU leaders who were previously reluctant to meet with him due to his authoritarian and anti-democratic ways softened their approach to secure Ankara’s cooperation in alleviating the refugee problem.

The Brussels meeting was followed up by an unexpected visit by German Chancellor Angela Merkel to Turkey, where she met Erdogan. Again, the focus was the refugee crisis, in return for which Erdogan also elicited a promise to help boost Ankara’s stalled EU bid.

Merkel was duly criticized in Germany for contributing to Erdogan’s prestige on the eve of critical elections in Turkey and for disregarding the strong criticism in various EU documents of his authoritarian tendencies.

But a joint letter issued by the presidents of the European Council and European Commission prior to the Antalya summit outlined the EU’s main priority. “Meeting in Turkey in the midst of a refugee crisis due to conflicts in Syria and elsewhere, the G-20 must rise to the challenge and lead a coordinated and innovative response to the crisis that recognises its global nature and economic consequences and promotes greater international solidarity in protecting refugees” the letter said, making this the No. 1 item in its list of urgent proposals to the G-20. “We will work closely with the Turkish Presidency to ensure a concrete outcome,” the letter added.

European diplomats indicate that issues pertaining to democracy and press freedom in Turkey will be brought up by European leaders attending the summit when they meet with Erdogan.

“But Syria is of immediate concern to everyone, and Turkey is among the countries that faces the biggest problems because of this crisis, so it is normal that this should be the main topic of discussion,” a diplomat, who wished to remain anonymous due to his sensitive position, told Al-Monitor.

Erdogan’s improved standing in Western eyes, although there are no signs yet that he is mending his undemocratic ways, is working to his advantage at home. It is providing him with ammunition against critics who say he has isolated Turkey internationally and deprived it of clout, even on issues concerning Turkey’s security interests.

Erdogan’s opening remarks to the G-20 summit, and statements after his meeting with various world leaders, will be followed closely in countries that have a stake in Syria to see if there is a shift in Ankara’s policy under the new AKP government. Some analysts argue that the strengthened position of the AKP after the elections will provide little incentive for it to change tack on Syria. Ankara’s policy has from the start been predicated on preventing Bashar al-Assad from having any role in Syria’s future.

Developments, however, have forced Turkey’s hand, resulting in a shift in position. Ankara now accepts that Assad may have some role to play in a settlement, but sees this as a limited and transient one.

Davutoglu told CNN’s Christiane Amanpour in an interview this week that if Assad was allowed to stay in power, no refugee would return to Syria. "The question is not how and how long Assad will stay, the question is when and how Assad will go,” he said.

Ankara is also signaling now that it will participate more decisively in fighting the Islamic State (IS). In his CNN interview, Davutoglu said Turkey could send troops to Syria against IS if its allies did so, too. He also said this had to happen according to a comprehensive settlement plan for the crisis.

Turkey remained out of tune with the United States and other allies for a long time, arguing that getting rid of Assad should be the main priority, not fighting IS, which, it argued, would disappear once Assad was gone because it was working with the regime.

“We seem to have learned our lesson in this regard and understood the danger this group [IS] poses to us, as well as the negative international effects of its activities in the region,” retired Ambassador Umit Pamir, who is currently with the Istanbul-based Global Political Trends Center, told Al-Monitor.

Pamir’s remarks come against the backdrop of increased raids by Turkish security forces against IS cells in Turkey prior to the G-20 summit. These raids follow a recent clash with IS militants in the city of Diyarbakir that left two policemen and several IS fighters dead.

Turkey’s willingness to participate more actively in the fight against IS also aims to allay criticism from its NATO allies that it has not been contributing sufficiently to this international effort.

Another motive for this increased participation is to try to obstruct the Kurdish Democratic Union Party (PYD) in northern Syria. Ankara sees this group as an extension of the Kurdistan Workers Party, which it has declared a terrorist organization.

The problem for Erdogan and Davutoglu during the G-20 summit will be to try to convince Washington and other Western allies to declare their anti-IS ally PYD a terrorist organization, too. Erdogan is also expected to lay out Turkey’s expectations from the international community with regard to Syrian refugees during the summit. Turkey has taken in around 2.5 million refugees and complains that it has spent more than $7 billion on them to date with little outside help.

Ankara is also pushing for a safe zone in northern Syria to settle the refugees and has said it is prepared to build “container cities” for them if this zone can be established. Both Erdogan and Davutoglu are expected to bring up the issue again in Antalya, despite the West’s reluctance. Some analysts suggest the refugee crisis will make some European leaders more amenable to this idea now.

Erdogan’s spokesman and principal foreign policy adviser Ibrahim Kalin provided some indications as to where Turkey stands now with regard to Syria during a recent press conference when he fielded questions about the Antalya summit.

Referring to the talks on Syria in Vienna spearheaded by the US and Russia, Kalin said they valued this process. Turkey is also participating in the talks. “The talks between Turkey, Saudi Arabia, the US and Russia are extremely important to us,” he said. “It is also of importance to us that all the stakeholders, including Iran and Jordan, are at the table,” Kalin added.

Ankara previously looked coolly on Russian and Iranian participation in any talks on Syria because of the support these countries have given to Assad. Its single-dimensional policy based solely on the demise of the Assad regime, however, left Turkey with few choices. It is trying to go with the flow of the international tide on Syria now. The G-20 summit, nevertheless, will provide it with an opportunity to strengthen its hand in the talks for an end to this crisis.

The bottom line is that this summit is expected to bring Erdogan back to international prominence as a regional player. Whether this forces him to mend his undemocratic and generally abrasive ways at home, however, remains an open question for now.