Lebanon’s former Prime Minister Saad Hariri announced his support for former chief of the army and Hezbollah ally Gen. Michel Aoun as president, which may have been Hariri's last resort as his relationship with Saudi Arabia has been tense. 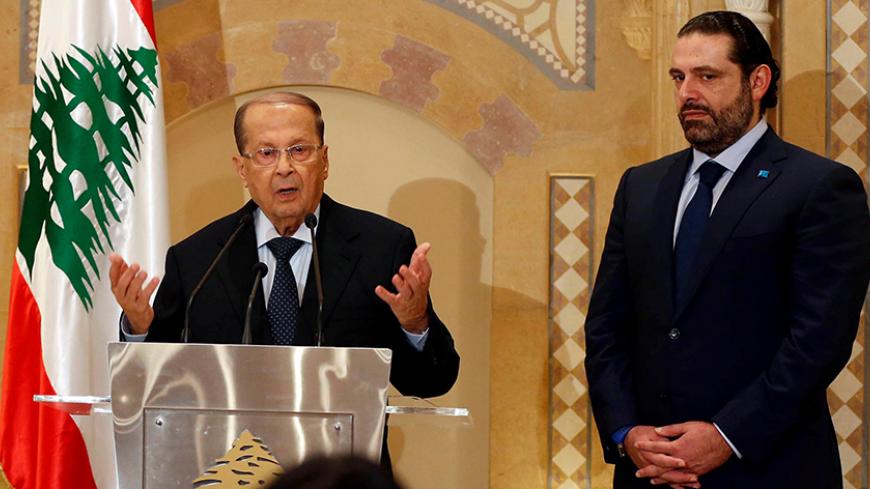 The journey from Lebanon’s parliament to its empty presidential palace shouldn’t take more than 20 minutes under normal circumstances. But when one considers that politicians have failed to reach consensus on who will assume the vacant post, it could be said the trip has taken two years and five months — so far. Since May 24, 2014, Lebanon has been without a president, which has affected all aspects of political life in the country.

The prime minister and the Cabinet became a caretaking authority, while the parliament — due to lack of consensus — had to self-extend its term twice. Over the last couple of years, the country had to survive with minimum politics and maximum political tension. Yet it was clear that political factions were cautious enough not to let things get out of control.

On Oct. 31, an end is expected to this long journey, one that could see former Chief of Staff Gen. Michel Aoun elected as the 13th president of Lebanon for a six-year term.

Aoun, an ally of Hezbollah and Iran and the leader of the largest Christian bloc in the parliament, secured the support of Saad Hariri, a close ally of Saudi Arabia and the leader of the Future Movement. This came after long meetings brought together advisers of both men who agreed that in return, Hariri would be Lebanon’s prime minister for the next six years.

Hariri’s move stirred controversy among his political movement and within his popular base, prompting several members of parliament from his parliamentary bloc to declare openly that they oppose their leader’s decision, and will not be voting for Aoun.

In fact, Hariri’s decision raised several questions in the Lebanese political arena, namely why an ally of Saudi Arabia would want to give an ally of Iran such a victory, while both nations are fighting all over the region a bitter war that is being paid for with oil and blood. The rebel parliamentarians refused to comment when approached by Al-Monitor.

Parliamentarian Ammar Houri of the Future Movement told Al-Monitor, “My position is clear, yet I am not interested in commenting any further on this issue.”

Mohammad Kabbani, also a member of parliament with the Future Movement, declined to comment, and other parliamentarians' mobile phones were either switched off or not answered.

“This is an implication of the change in relations with Saudi Arabia, mainly with the new leadership that deals with Lebanon reasonably and not passionately,” he said. “Maybe this is good for Hariri. It is time for him to take his decisions by himself after all these years of addiction to Saudi money and staying at his palace in Riyadh; it is time for him to gain strength and return to his popular base.”

The former Saudi diplomat was referring to the financial crisis Hariri is facing, and the attempts to convince the Saudi royal family to save him from this crisis. Hariri’s main company, Saudi Oger, had failed for months to pay the salaries of its employees due to serious financial setbacks influenced by the economic situation in Saudi Arabia and the shaken personal relationship between Hariri and Saudi Crown Prince Mohammed bin Nayef.

Shammari suggested that Hariri could be under pressure for the coming weeks or months, saying, “But if it was up to him and he showed resilience, relations with Riyadh are possibly to return gradually according to new rules, measures and interests — knowing that Saudi Arabia will always stand beside Lebanon whatever the circumstances.”

Indeed, Hariri’s decision was a political adventure given the circumstances surrounding it. He deliberately endorsed the candidate of Hezbollah, thus handing his rivals a clear public victory, not to mention boosting their popularity among Christians. Yet the main question is whether Hariri had any other options.

The former prime minister found himself at a crossroads — either he goes for an all-in political gamble, or he preserves the status quo until the situation changes in the region. Hariri felt the heat after several serious developments, one of which was the municipal elections in May.

The election results, mainly in Tripoli, showed Hariri losing popularity to new competitors from within his political movement. Ashraf Rifi, the resigned justice minister — and a hawk who links himself to "Harirism," but not to Saad Hariri — was the man whose list defeated all political movements allied together in Tripoli.

Amid the endorsement of Aoun, Rifi took to the street Oct. 23 with hundreds of supporters vowing to start a peaceful opposition in order not to elect Aoun. Rifi expressed total rejection of Aoun or any other candidates supported by Iran.

If Hariri does not return to the government as prime minister and re-establish ties with the grassroots community, his political future might be in tatters — therefore there was a need for a shock. It did not really matter whether the shock was positive or negative; the most important thing was to shake the status quo and head toward a new chapter. This is a chapter that Hariri’s opponents within his movement see as gloomy; still, this may not be the case, putting aside the political impact of Aoun’s election.

Hariri’s Cabinet would enjoy the support of his bitter rival, Hezbollah leader Hassan Nasrallah, who said Oct. 23 that by accepting the appointment of Hariri as Lebanon’s prime minister for the next six years, Nasrallah will be making "a big sacrifice.”

In Lebanon, the most effective and potent position in the state is that of prime minister. This has been the case since the 1989 Taif Agreement that ended the 15-year civil war. A president in Lebanon has limited power; he is more of a father for the nation than its leader. Given this situation, Hariri might be able to transform his many problems into a rare opportunity. Being left without a regional caretaker (Saudi Arabia), the young politician is going to do business alone with his rivals without any burdens. It is true that he will sometimes weigh decisions with regional scales, but he will have enough flexibility to build a record as an experienced self-made statesman.

Not only Hariri will have this flexibility, his allies in Saudi Arabia will have it, too. Shammari said that one of the failures of the Saudi policy in Lebanon was putting all the eggs in Hariri’s basket. He elaborated, “Limiting relations with the Future Movement and marginalizing all the other currents was wrong. Riyadh has to work now on reviving relations with other Sunni, Christian and even Shiite movements. This serves all of us, in Lebanon and Saudi Arabia.”