Lebanon's upcoming parliamentary elections still have the potential to surprise, as political giants aim to solidify their grip on power and as retired military officers make the leap to politics. 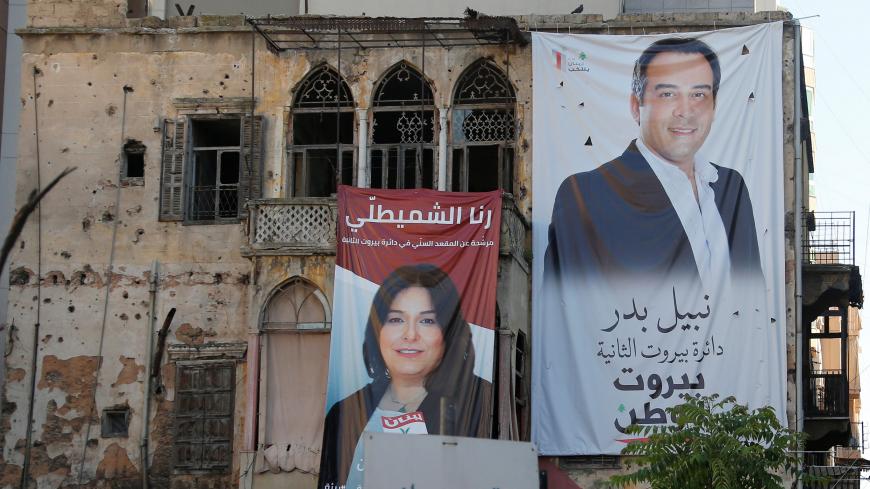 Posters of Lebanese parliament candidates Rania Shmaitilly and Nabil Bader are seen on a building in Beirut, Lebanon, April 23, 2018.

After five years of delay, Lebanese go to the polls May 6 to elect a new parliament for the first time since 2009. The ultimate objective of this popular vote is to readjust the power representation of the same ruling class and set its rules of engagement for the next four years. The 2018 general elections will be held for the first time under the proportional rather than the majoritarian system, with a revised gerrymandering of 15 districts (as opposed to 26 in 2009). It is safe to argue that the winners of nearly 70% of the seats have been predetermined due to the confessional nature of the political system.

The electoral law reflects the current political landscape in Lebanon, where alliances are volatile and no single coalition alone can rule the country. Moreover, these legislative elections are held against the background of two significant developments: the repercussions of the 2016 presidential deal that elected Gen. Michel Aoun, and the volatile situation in Syria next door. There are five trends to watch in these elections:

Hariri-ism is done but not over

Nearly two decades ago, the Syrian regime and its Lebanese allies gerrymandered Beirut into three districts to weaken the electoral capabilities of then-Prime Minister Rafik Hariri, who came back swinging in 2000 and won 18 out of 19 parliamentary seats allocated to Beirut. Future Movement leader Saad Hariri is not expected to win more than half of these 19 seats in 2018. Over the past three decades, Rafik and Saad Hariri’s parliamentary blocs included non-Sunni deputies at a time when the major Christian political parties were marginalized in the political system. The current electoral law restricts the ability of Saad Hariri and all the principal leaders to have an oversized parliamentary bloc. These elections are partially about who will inherit the extra-parliamentary Sunni, Shiite and Christian seats that Hariri is about to give up. Moreover, Hariri is facing unprecedented competition across Lebanon from Sunni rivals, including from those who are close to Saudi Arabia. While Hariri is weaker than he was in 2009, the election outcome is expected to reinforce his indispensability as a premier in the current status quo. However, this indispensability could be put at risk, either by regional turmoil or by US-Saudi pressure on Hariri to directly confront Hezbollah.

Hezbollah’s predicament in the 2018 elections is how to find new allies to compensate for the potential loss of its major Christian ally, the Free Patriotic Movement. This relationship has gradually deteriorated since Aoun was elected president and his son-in-law, Gebran Bassil, became the new leader of the Free Patriotic Movement. Hezbollah is running candidates across Lebanon for the first time to expand the scope of a Hezbollah-friendly parliament. There is no doubt that the Shiite coalition (Hezbollah and Amal) is preparing a contingency plan by enlisting hawkish figures as candidates in case a political confrontation with Hariri is renewed. Hezbollah sees the elections as a chance to demonstrate that its legitimacy in Lebanon is not coerced. The challenge, therefore, is not to merely score a definite victory, but to secure a decent turnout in the predominantly Shiite areas, where there is growing socio-economic discontent. Secretary-General Hassan Nasrallah has made corruption a central campaign issue for the first time, setting the stage for a new phase in expanding Hezbollah’s role in governing.

The 2018 general elections are expected to reinforce the realignment of the 2016 presidential deal and shape the quorum that will decide what will happen in four years, whether the gerrymandering of the May 2022 general elections or the October 2022 general elections, if there was no political impasse or delay of elections. The ruling class is operating on the premise that Hariri and Bassil, both in their late 40s, have a long-term agreement to rule the executive branch for at least the next decade. The plan is to transfer Hariri’s presidential deal with Aoun to his son-in-law Bassil in 2022. The complicity of this new guard in Lebanese politics is evident in their maneuvering of the Cabinet, their carefully crafted attacks against opponents and their electoral alliances in key districts. The growing opposition is coming from the old guard, most notably parliamentary Speaker Nabih Berri and Druze leader Walid Jumblatt, who have both lost their status as kingmakers in Lebanese politics. Lebanon will face critical economic debates in the next four years regarding privatization, gas production and a growing national debt. The economic liberalism of the new guard, which enjoys the support of the business sector, is expected to face off with the populist messages of the old guard. However, make no mistake, this is not a class struggle, it is a continuation of the confessional system’s battle for influence.

Among the 917 candidates in the 2018 elections, there are new trends, such as the candidacies of journalists, activists and entrepreneurs. But what is most remarkable is the generational transfer of power in the feudal system and the political ambitions of the retired generals and security officers. Jumblatt, Suleiman Frangieh and Aoun, among others, have begun passing the mantle to their heirs, initiating a systemic shift that might, over time, weaken the leverage of the feudal elites. Moreover, the former head of General Security, Jamil al-Sayyed, and former director of the Internal Security Forces, Ali al-Hajj — two pillars of the Lebanese-Syrian security apparatus during the Syrian regime's rule over Lebanon — are running in the elections. Ashraf Rifi, who was head of the Internal Security Forces during the height of Hariri's March 14 alliance, is now running against Hariri’s list in Tripoli. Aoun’s son-in-law and former brigadier general in the army, Chamel Roukoz, is running for Aoun’s seat in Mount Lebanon. These are just a few names in the long list of retired officers seeking the limelight. However, their impact is limited in a playing field dominated by feudal leaders, armed groups and bank executives.

The magic number is 65

There is a 50% plus one rule for a Lebanese government to gain the confidence of parliament. This means 65 votes. Based on the current realignment, neither the Future Movement-Free Patriotic Movement alliance nor the Hezbollah-Amal-Jumblatt alliance is expected to meet this threshold after May 6. They will therefore need to work out a deal to form a new Cabinet and rule the country, which means the inefficiency of the Lebanese government will continue in a system ruled by the confessional consensus tradition. While Berri seeks Shiite veto power against the Sunni-Maronite alliance, Hezbollah wants to preserve the status quo at home to focus on a regional agenda abroad. Since 2014, Hezbollah has replaced the Syrian regime in regulating the ruling coalition, but the anarchic nature of the electoral law will create a coalition that will be harder for Hezbollah to manage. The Lebanese political scene is about to become a roller coaster.