Attempts to alter the image of lavish spending at Turkish President Recep Tayyip Erdogan’s palace backfired when the unprecedented high price of the white tea consumed at the palace was revealed. 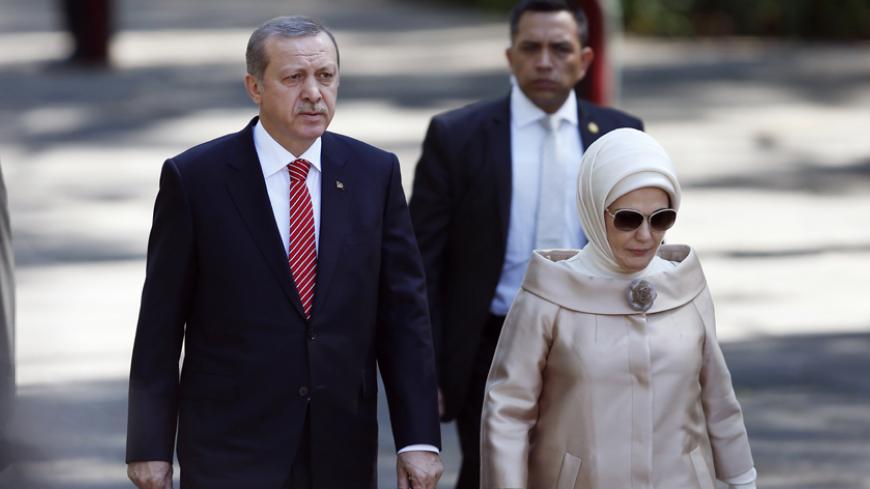 Turkey’s pro-Justice and Development Party (AKP) media have gone all out in an attempt to control public opinion in the run-up to the June 7 elections, following polls indicating that the AKP is not doing so well. With the corruption probe at the end of 2013 not yet forgotten, extravagant spending at the presidential palace (White Palace) has caused an uproar in Turkey. Due to lack of transparency, it is difficult to tell how much was spent on the palace's construction and decoration, and what is spent on the maintenance of a building with more than 1,000 rooms.

The AKP’s grip on the media is well documented in Turkey and is used not only to prevent embarrassing news from spreading, but also to generate a false positive image in the public opinion of the president and his family.

In an attempt to showcase Emine Erdogan as a frugal, simple and environmentally friendly first lady, pro-AKP Yeni Safak Daily published a profile of how she manages the palace's kitchen. Some intriguing details were revealed. In an effort to minimize waste, the Erdogan family recycles lemon and apple peels into vinegar. They also use their olive and date pits to make sauces. (Al-Monitor could not verify what kind of sauce can be made from these pits.) It appears that Emine is conscious about organic farming and investigates in detail all the origins of the products that enter the palace. We also learned that she had recommended dry mango slices to the first lady of Mali, Keita Aminata Maiga. According to the Yeni Safak article, Maiga was reportedly complaining about not being able to export mangos because of a short shelf life. Emine then recommended to dry mango slices to assist in Mali’s exports. But nothing got the attention of the Turkish public more than the white tea discussed in the article. The first lady of Turkey recommended that we all reconnect with Mother Nature and consume only the most natural products, and confessed that the most frequently consumed tea at the palace is white tea from the Rize region on the eastern Black Sea coast of Turkey.

So what is the big deal? White tea is sold in well-stocked supermarkets all over the world, along with black and green tea, at $3-$4 for a pack of 20 tea bags. But that is not the white tea consumed at the presidential palace in Turkey. Indeed, even most residents in Rize are not aware of this white tea, which sells for about $1,800-$2,000 per kilo (2.2 pounds). Considering the increasing poverty and the fact that 22 million out of 77 million people in Turkey live on an average monthly income of $320, this most unrefined and luxurious white tea is not available at your regular supermarket. The majority of Turks, who are mostly black tea drinkers, have not even heard of white tea. The white tea consumed at the palace caused an uproar in social media, where people ridiculed the allegedly modest palace life of the Erdogan family.

In a rare instance, pro-AKP pundits mostly remained silent, likely because there was nothing to say that would justify the lavish lifestyle and extravagant expenses of the Erdogan family. On March 27, discretionary funding for the president was approved by the parliament, which alleviated public concerns about the palace extravaganza.

Below are examples of how the white tea became the latest joke on social media of the opposition movement:

But the most striking tweets were written by a former AKP parliamentarian, Suat Kiniklioglu:

The opposition news outlets showed no mercy to the hypocrisy of the "modest" practices at the palace's kitchen. One outlet wrote: “The highest rated on Bootlicker News today is the news about saving money by recycling lemon peels.” The report provided a detailed account of the estimated spendings at the palace. The numbers are simply outrageous: The palace's monthly electricity bill, for instance, allegedly exceeds $500,000.

While the public was debating why there is no limit to presidential spending, one article about olive pits and lemon peels that tried to portray the first lady as a frugal nature-loving housewife backfired, probably because neither the palace’s public relations office nor the Yeni Safak Daily reporter have ever bought the special white tea from Rize.