The region needs more openness and dialogue, and less conspiracy, around its tea culture. 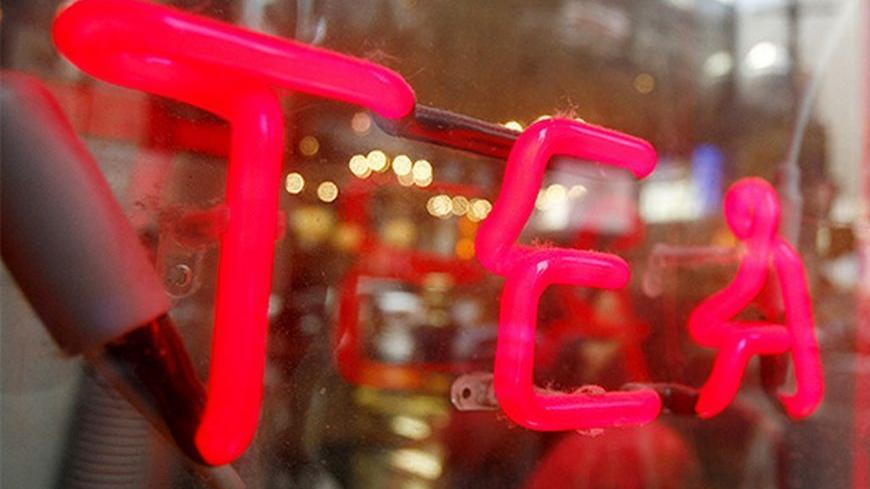 One drink in Turkey, tea, undoubtedly remains part of the ritual that everyone, regardless of social class, political opinions, ethnicity or religious belief, shares in common. - REUTERS

Now that the headline has caught your attention, let me clarify that the "tea parties" I am advocating for are not more "reactionary conservatives" such as those in the United States, who recently caused their government's shutdown. Just the opposite of such uncompromising outlooks, this region needs more openness and less conspiratorial thinking. The "tea parties" I am rather recommending are simple social gatherings, where invited guests can get to know each other better over some refreshments, in this case much-liked and popular tea. Drinking Turkish tea is a ritual almost unequivocally loved and cherished among friends and family in Turkey and its surroundings. Yet, the value of tea in the region — both symbolically and literally — is underestimated, although it's immense.

It's worth noting that drink preferences of the secular-minded and pious parts of the population have always been among symbolic markers of identity in Turkey. In that light, Turkish Prime Minister Recep Tayyip Erdogan stirred the public in April 2013, by stating that instead of beer or raki (an opaque anise liquor), the national drink is instead ayran, made of yogurt, water and salt. Ayran, whether consumed or not, could become the new line of division in present culture wars. Yet, one drink in Turkey, tea, undoubtedly remains part of the ritual that everyone — regardless of social class, political opinions, ethnicity or religious belief — shares in common.

Even though the tea culture is not very old in Turkey, ever since its introduction in the 19th century, it has become an irreplaceable part of daily life. According to academic Serkan Gunes in his very informative report on “Turkish Tea Culture and its Products,” exploration for agricultural production of tea began around 1894, during the period of Sultan Abdulhamid II. The area around the eastern Black Sea coast, from the Georgian border to the town of Rize, was determined to be very amenable for tea cultivation, due to its climate and fertile soil. Boosting production had to wait until the end of World War I, and several laws to support the processing and marketing of tea were passed between the two world wars. The General Directorate of Tea (Caykur) installed the first tea factory in Rize in 1947. In 1984, during the liberalization of the economy under Turgut Ozal, the state monopoly was removed, and the production of tea was opened to the private sector.

Considering the lower costs of tea over coffee, its easier preparation and arguably great taste, it is not surprising that tea spread very fast. Regional specificities today reflect tea-drinking practices and local taste preferences. Moreover, drinking darker, stronger tea (tavsan kanı) instead of lighter tea (pasa cayi) carries the idea of symbolic entry into adulthood. From color to preparation style, every detail matters. Moreover, there's an old Turkish folk saying, “Conversations without tea are like a night sky without the moon.”  No wonder 96% of the population drinks tea every day in Turkey. Whether at home, at work or in teahouses, where many men also gather to play board games or watch TV, tea has become an essential part of Turkey’s culture.

On the business side of tea as commodity, a lot is at stake in Turkey and its vicinity. According to Arabian Business, Saudi Arabia, where over 19 million cups of tea are consumed daily, is the second largest consumer of tea in the Arab region. Moreover, the price of tea in the UAE has risen by almost 50% over the past couple of years. Considering the high demand by Gulf Cooperation Council (GCC) countries, and recent statements of Turkish Economy Minister Zafer Caglayan that “the Arab world will be the biggest trade partner of Turkey in 2023,” investing in the tea trade seems a very lucrative business opportunity.

According to Euromonitor tea trend reports, in 2012 in Turkey, tea saw above-average total volume growth. Better branding and inevitable star-power-commercials contributed to positive outcomes. Yet, in spite of being the fifth-largest producer of tea in the world, Turkey exports only 1% of its total production. Of course, market preferences matter, since in the Middle East, besides Turkish tea, stronger aromas from Sri Lanka are in demand. It remains to be seen whether plans for future customs-free trade, besides tapping into similar cultural, if not ancestral, ties might result in stronger exports of tea from Turkey to the Middle East.

One globally shared threat to the tea industry is increasing consumption of carbonated soft drinks and coffee. Thus, besides citing tea’s health benefits, emphasizing cultural heritage and traditional values related to tea drinking as an “authentic Arab [or Turkish] experience” remains a powerful marketing tool. Efforts vary in creativity: For example, Jumeirah Messilah Beach Hotel & Spa, Kuwait’s idyllic resort, is promoting its extravagant “Tea Lounge” with the "Eid Al Adha Afternoon Tea" program. Check out the upcoming International Coffee & Tea Festival in Dubai, too. On the other hand, in Turkey, the Rize Tea and Tourism Festival is currently incomparable to Dubai’s grand ambitions. (The one in Rize does hold a fun fastest tea-drinking competition.) There is a lot of food for thought in terms of growth opportunities for those in the Turkish tea industry.

Sharing the allure of this particular cultural ritual also includes the presence of suitably adapted related objects on the foreign markets. One example is designer Zeynep Fadillioglu’s first collection of furniture and accessories, and Kubbe Tea Tray, inspired by Istanbul mosques, handmade and available at $893. There also seems to be an abundant variety of Turkish tea-glass design today.

Moreover, besides its powerful business and cultural aspect, tea could also serve as a mighty political tool for nourishing societal peace in the region. It is worth recalling successful examples like the anti-racism campaign of sharing a cup of tea in Norway with Muslim immigrants, or a mosque in York, England, whose leadership invited far-right protesters for a cup of tea, to learn from disturbing perceptions of each other. Mohamed El-Gomati, the York mosque elder, quoted George Bernard Shaw: "If the world's problems were brought to the Prophet Muhammad, he would solve them over a cup of tea." It is precisely the lack of conversation and understanding that perpetuates confrontational vicious cycles everywhere. So, sharing (mis)perceptions in setting where opposing sides agree to listen to each other, seems the hardest to achieve.

Now that teahouses in Istanbul are opening with a cool twist in hip neighborhoods, they could also become social spaces where strangers mingle to connect, acquire new interests and enjoy diversity. Such was the case with fantastic idea of art and temporary tearooms in Birmingham. Considering that Turkey exactly needs healthier social connections, the challenge is to step into the unfamiliar and share a tea, but with those of opposing worldviews.

Ultimately, if Turkey aims to produce “Turkish tea” as one of the world brands by 2023, tea industry leaders will have to converge on currently differing investment visions. Yet, when it comes to country's branding, equally important is to no longer think in terms of just ayran or raki, tea or coffee. Instead, Turkey should be known for ayran and raki and coffee and tea, and şalgam, and salep, and boza, etc. However, none of these traditional drinks are universally appealing to almost all Turks as is tea. Therefore, maybe the next step toward warming to celebrating plurality beyond divisions is encouraging more gatherings with "the Other" over that commonly loved, hot cup of tea.

Riada Ašimović Akyol is an independent analyst and writer. Her articles have been published by the Al Jazeera Center for Studies and Turkish daily Today’s Zaman. She is obtaining her doctorate in international relations at the Galatasaray University in Istanbul. On Twitter: @riadaaa