A simit is no longer just ring-shaped sesame bread, but a subtle introduction to Turkish cuisine. 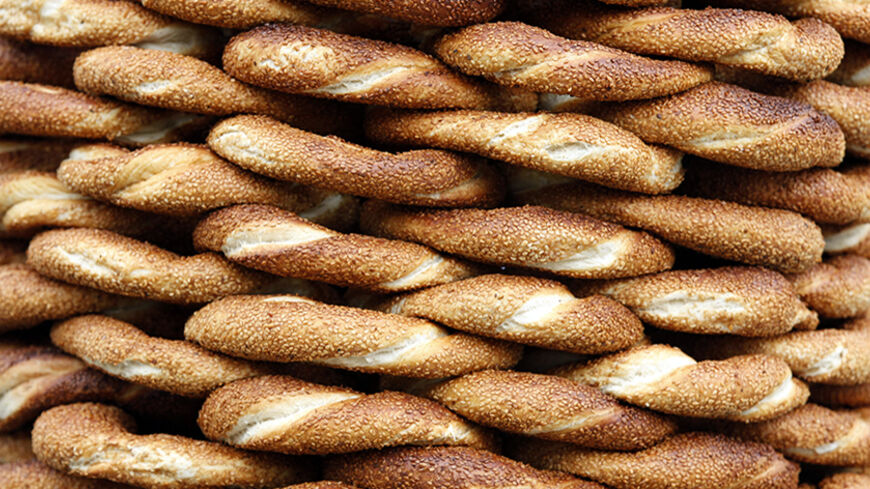 A pile of simit, the traditional Turkish sesame bread, is displayed for sale in Istanbul, Feb. 17, 2012. - REUTERS/Murad Sezer

There are two quintessential sounds of the Turkish street. One is the call to the prayer from the mosques and the other, street vendors. Young men with steaming trays over their heads roam through the crowds selling "simit," a ring of bread rolled in sesame seeds. Their cries reverberate in the streets, adding to the background noise of daily life in every corner of Turkey. It is a popular breakfast or snack bread, often eaten on its own, and pairs well with Turkish black tea and cheese.

If you ask any Turk to name a few Turkish food items, simit would be one of them. Each city and even town tends to have its own version. Every consumer, it seems, has their favorite of the different popular shapes and tastes. As American food journalist Robyn Eckhardt, who has done years of research in Turkey looking for unique local tastes, told Al-Monitor, “What strikes me about simits is how integral they are, or seem to be, to the daily Turkish diet. We have traveled a lot in the eastern half of the country for my upcoming cookbook and everywhere we go, there is simit. There are, of course — as with lots of Turkish bread-type foods — regional variations. In Antakya, for instance, simits are huge, about 20-24 centimeters [8-9 inches] in diameter, very thin and unseeded. They're sold with cumin-salt for dipping. In Kastamonu, simits are 'bald' and unbraided. … And they are the base of a delicious dish. Then they are soaked with chicken broth, doused with garlic yogurt, sprinkled with oven-dried mincemeat and topped with crushed walnuts and a big drizzle of browned butter.”

Simit aficionados discuss not only the different tastes of simit in different regions of the country, but even have specific preferences for bakeries in their towns.

It is estimated that about 2.5 million simits are consumed daily in Turkey. The simit’s history dates back to the 14th century. Historian Halil Sahillioglu’s archival study mentions simit in 1525 Istanbul, and it is recorded in the Ottoman Palace's kitchens in the 1600s. Banned for a short period due to flour shortages during World War II, simit appeals to all socioeconomic groups in Turkey.

Simit does not end at Turkey's borders, and is widely sold on the streets of Greece, where it is called "koulouri." In the last decade, simit has gone global. Turkish Ekonomist Journal editor Talat Yesiloglu told Al-Monitor, “The process started with entrepreneurs in Turkey taking a street food off the black market, where some of the profit could not be regulated, and turning it into a well-regulated, streamlined process with chain restaurants like Simit Sarayi.” On Nov. 9, this Turkish company with branches abroad opened up a cafe on New York City's ritzy 5th Avenue.

Simit Sarayi and other chains in Turkey have taken simit to another level. They serve various types of simit like wheat or whole grain, and with different condiments. How about some salmon or hummus? Simit is also used as a sandwich bread.

Simit Sarayi was not the first to introduce Simit to bagel-loving New Yorkers. Gulluoglu Baklava has been flying simits from Turkey since 2009. Simit+Smith has been baking them in the United States since 2012, and now has six branches. There are other local bakeries in New York, New Jersey and other areas where immigrants from the Balkans, Greece, Armenia or Turkey produce simit for their local clientele. However, the Simit Sarayi and Simit+Smith bakeries are serving another purpose: introducing different types of Turkish tastes to global foodies.

The CEO of Simit Sarayi, Abdullah Kavukcu, told Al-Monitor that the company started in Turkey in 2002 and now has franchises in 14 countries. Kavukcu said, “In the next five years, we plan to have 100 branches in Europe. In 2015, we will be in 17 different countries. Our next goal is to set up a branch on Oxford Street in London and the Champs Elysees of Paris. We also would like to branch out to Azerbaijan, Canada and Italy. Out of our most lucrative 10 branches, five of them are abroad. The most profitable branches are in Mecca, then New York and Amsterdam, in that order.” Kavukcu explained that the company offers samples to customers and when their New York branch opened, there was a line to get in the store. Turcophiles from New York shared over social media how thrilled they were to see Simit Sarayi in the heart of New York, and vouched for the quality of its simit.

Simit+Smith Cafe and Bakery, on the other hand, is American born. The president and CEO of Simit+Smith, Gokhan Cakmak, told Al-Monitor, “Turkish food abroad was limited to kebab and doner [gyro]. With a decade of experience in the restaurant industry in the US, I was looking for the taste of Turkish cafe culture and could not find one, so I initiated the bakery to produce my own simits.” However, it is more than simits on Simit+Smith’s menu. They serve Turkish coffee and tea, an assortment of different Turkish cheeses, olive paste, ayran (a yogurt drink), pogaca (a pastry found all over Eastern Europe), Turkish sodas, homemade lemonades, several Anatolian dips with sumac and cumin and also options that appeal to American taste buds such as hummus, salmon and guacamole.

Cakmak said, “Simits are made with flour and yeast and a touch of salt, baked in convection ovens that inject steam, which makes it lighter and healthier than a typical American breakfast pastry. Simits are then immediately dipped into grape molasses before being coated with sesame seeds or multigrain toppings, making a crunchy crust while retaining a moist, light texture inside.” A simit has fewer carbs and less fat than a regular sesame bagel or croissant. Cakmak told Al-Monitor, “Simit+Smith’s original Simit has 65% less fat, 90% less saturated fat and 100% less cholesterol per serving than a large butter croissant.” The versatile simit products of Simit+Smith are offered by several gourmet food stores throughout New York.

The introduction of these new bakeries in New York and New Jersey has been widely reported in the media. Most of these pieces struggle to explain what simit is, and call it a Turkish bagel. Eckhardt told Al-Monitor that she wishes Americans would taste and enjoy Turkish-style simit. Many foods resemble each other across cultures, such as different types of coffee, but they are all unique in their own way.

Some foods do not travel well. Eckhardt told Al-Monitor, “'Lahmacun' is one of them. Marketed as Turkish pizza in American markets, and because Americans — most Americans, anyway — think pizza should be loaded with toppings. Lahmacun made in America is almost always much too heavy on meat. It does not have the smear of meat, peppers and spices on a super thin crust that you get in Turkey.”

It is difficult for many local delicacies to travel long distances and still taste good. Yet, simit's story may be different. The introduction of simit on the East Coast by entrepreneurs dedicated to perfectionism using healthy, organic ingredients and serving a cosmopolitan area is going rather well so far. Their simit tastes just like it does back home, but these cafes also offer complimentary tastes to appeal to diverse palates. Simit is not here to take over bagels, croissants or pretzels, but just to provide an alternative for those seeking a Mediterranean diet. That said, simit is subtly paving the way for other tastes from Turkey and the region to wherever these health-conscious simit-baking entrepreneurs travel.