The traditional taste of a spicy cured beef, pastirma, one of the most powerful cold cuts in the world, finds its place in new recipes. 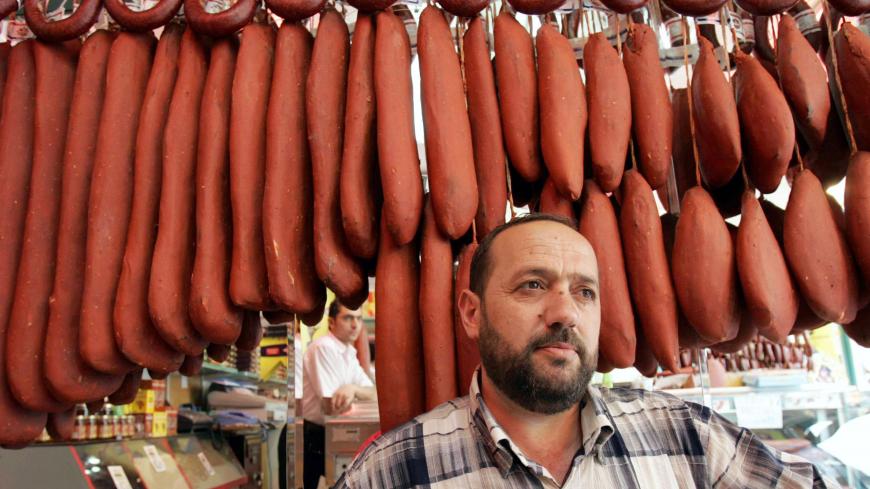 A grocer stands in his shop in front of lines of pastirma, a type of cured beef local to the city, in Kayseri, central Turkey, June 27, 2006. - REUTERS/Umit Bektas

In early December, Turkish President Recep Tayyip Erdogan kindled an old culinary rivalry between two Turkish cities — Kastamonu and Kayseri — by praising Kastamonu’s pastirma, a spicy cured beef that is part of the national cuisine and a ready accompaniment to raki, the anise-based national drink.

Erdogan’s words on “the best” pastirma had immediate ripple effects in other cities such as Afyon and Sivas, which also lauded their versions to be the best. The sales of pastirma soared all around the country.

Pastirma, also known as basturma or bastirma, can be found in the Levant, as well as in Anatolia. Different cultures claim its origins, but some versions — albeit with different spices — can be found in Armenia, Egypt, Cyprus, Greece and other countries in the Balkans. Febe Armanios, a professor of history at Middlebury College, who researches culinary and food history of the Eastern Mediterranean, told Al-Monitor that she had been introduced to "basterma" in Egypt, where it is a delicacy that few can afford.

Robyn Eckhart, a food journalist and the author of “Istanbul and Beyond: Exploring the Diverse Cuisines of Turkey,” says pastirma resembles Italian bresaola with the addition of all the bold flavors, including garlic. Indeed, at the turn of the century, Armenians who arrived in Beirut have been ridiculed due to the spicy scent of pastirma that others claimed oozed from their bodies.

It is also the Armenians who keep up the tradition of pastirma In Los Angeles. Sahag’s Basturma, a family-run business, is managed by Harut and Rebeka Tashyan, who proudly told Al-Monitor that late chef Antony Bourdain had devoted an episode to their shop.

A good pastirma depends on many factors, ranging from the type of meat, the waiting period and the weather and the spices used. It can be made at home, but it requires patience, as it may take up to 45 days depending on the thickness of the meat. Pastirma’s taste first and foremost depends on the quality and the section of the beef used. The most precious pastirma are made from the shoulder area, known as entrecote, or Porterhouse steak. Tenderloin and top sirloin are reserved for the most expensive kinds.

Although today most pastirma is produced in factories, the process still requires a human touch. The meat needs to be cleaned and large quantities of salt — be it rock, sea, kosher salt or whatever the producer prefers — need to be put in pockets carved into the meat.

“Each meat is different, some absorb salt promptly, others gradually,” Harut Tashyan told Al-Monitor.” You have to be attentive to the meat rather than simply following the clock.”

Once the salt is absorbed, the excess salt has to be thoroughly washed off the meat and then dried out. Then — and this is the required step — it needs to be pressed to ensure that all excess water or blood is extracted. Traditionally, this step, which makes pastirma different from other processed meats, was done with heavy marble blocks and then the meat was hung in racks to dry. This was when the weather conditions played a role — the best results are achieved when it is naturally air-dried. The town of Kayseri claims it owes its pastirma to the mountain air and its Indian summers. Not surprisingly, the term in Turkish for a prolonged summer is “pastirma yazi,” the summer of, or for, pastirma.

Producers put out the pressed meat to be air-dried between late August to November when there is little to no rain and a nice warm breeze.

The last step is coating the logs of meat with chemen — a mixture of spices, oil, garlic and salt — and hanging them again.

For Armanios, it is the chemen that makes pastirma into an exceptional delicacy. “From a culinary history angle, many cultures have produced dried beef,” she said. “For me, the most distinctive element of pastirma is the composition of the chemen paste or [as it is called in Arabic] majun al-hilba that coats the dried meat. It is an East-West combination of spices: garlic, salt and sometimes cumin or coriander. But it almost always includes red paprika, which is a New World spice that didn’t really make it to Europe and the Middle East till the 1600s or 1700s. And it must include ground fenugreek seeds, an Old World spice that gives its pungent flavor and smell.”

Fenugreek, a piquant herb, alters the scent of human sweat for a few days — and that's why many consumers today would either shun pastirma or prefer the modern, light versions without chemen.

“Every maker has its own recipe for chemen,” Eckhart noted, explaining that Kastamonu pastirma is less garlicky than that of Kayseri. Some attribute this smoother taste to organic Taskopru garlic of Kastamonu that is known for its sweeter aroma.

“Pastirma ekmek — something like a calzone filled with slightly sliced pastirma and rubbed with butter as soon as it comes out of the oven — is a thing in Kastamonu and it’s wonderful,” Eckhardt said. “Chemen is a culinary delight on its own; it keeps forever and can flavor rice, bulgur, eggs, meat dishes, and be stirred into suzme yogurt  [drained or Greek yogurt] for a dip.”

Traditional Levantine cuisine lovers make and keep jars of chemen at home and swear by its health benefits.

Eckhardt likes to compare pastirma to Italian bresaola due to its bold flavors enhanced by chemen, rather than pastrami. But whoever its Western cousin may be, pastirma is used in a variety of ways both in traditional Turkish cuisine and Western-inspired recipes. It can take the place of bacon in burgers, ham in an omelet, prosciutto in pasta and pepperoni on pizza. Thicker slices with more coarse sections of meat can be utilized in stews of all kinds. Chemen coating in thicker slices is heavier and it adds an amazing aroma to stews.

Pacanga boregi, a special pastry also utilizes pastirma, along with different types of paninis. Most households enjoy pastirma with eggs for breakfast but also it is a must-have for special holidays, such as Ramadan, Christmas or New Year's. Harut and Rebeka Tashyan explained that they receive a high number of orders during the holidays as families want to remember home with the aromas of pastirma filling their homes. Indeed, quite a few visitors from Turkey not only sample pastirma in Los Angeles but also take it back home with them.

So, returning to Erdogan’s statement, where is the best pastirma, you ask? The best pastirma is the one where natural products are used from grass-fed cows to high-quality clean air and spices. Like most preserved foods, pastirma is an honest witness of our environment.