Is Turkey’s state of emergency really over?

A tough security bill drafted up by Turkey’s ruling party looms as a replacement for the two-year state of emergency that ended July 19. 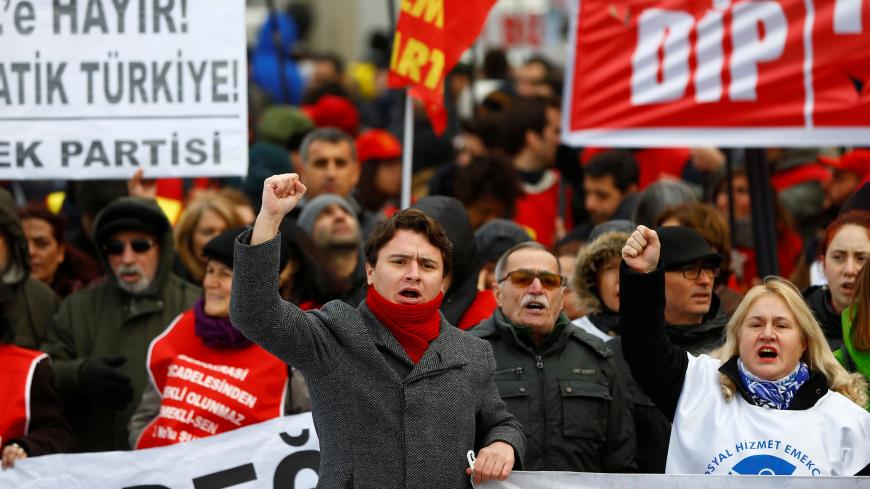 Demonstrators shout slogans during a protest against the government's plan to extend for another three months the state of emergency imposed after the 2016 coup attempt, Istanbul, Turkey, Jan. 14, 2018. - REUTERS/Osman Orsal

The two-year-long emergency rule did end on July 19, after the last three-month extension expired, but a security bill, submitted to parliament by the AKP, suggests that Erdogan might have in fact promised an end to temporary emergency rule in favor of one of a permanent variety. The measures proposed in the 30-article “anti-terror package” appears to herald undeclared emergency rule.

One of the most controversial articles pertains to the firing of public employees. In a massive purge after the failed putsch, the government used legislative decrees — a power it enjoyed under the state of emergency — to dismiss nearly 130,000 public employees without investigation or trial. The proposed article will allow the purge to continue through commissions set up at the Constitutional Court, the Appeals Court, the Council of State, and the Higher Board of Judges and Prosecutors to decide on the termination of public employees suspected of links to terrorist organizations. Similar commissions would be established for the military, the police, universities, ministries and governor’s offices. Dismissals would not require court findings or rulings confirming that the person in question is actually linked to a terrorist group. The statute would remain in place for three years.

Another measure goes after public servants who faced expulsion after the putsch but were reinstated after examination by a special emergency rule commission. The new provision paves the way for demoting these employees and denying them the chance to claim compensation for their dismissals.

In the security realm, the changes would extend 24-hour detentions to 48 hours and to four days in cases of mass arrests. The bill also grants special powers to governors. In circumstances deemed to threaten the public order and security to the extent of disrupting daily life, governors would have the authority to restrict movement into and out of the areas in question. Soldiers would be permitted to conduct body searches without a judicial order. The authorities could ban public demonstrations on such vague grounds as “causing excessive and intolerable inconvenience in the daily life of citizens.”

The package is being touted as “French-style,” in reference to the tougher security law that France enacted last year after ending a two-year state of emergency introduced after a string of bloody terrorist attacks in 2015. Prime Minister Binali Yildirim had pointed to the French example in early July, saying, “They transferred the emergency rule powers to normal laws. We will do the same, if need be.”

The claim of any similarity with France, however, is questionable. The powers held by French governors, for instance, are subject to scrutiny by the Senate. For Turkish governors, such oversight is unlikely. Moreover, the definition of “terrorism” in the Turkish penal code has long been under fire for being too vague and too broad and is already a major reason for oppressive practices.

The Turkish and French cases are as different as chalk and cheese according to Ibrahim Kaboglu, a prominent scholar of constitutional law and a lawmaker for the main opposition Republican People's Party.

“The state of emergency in Turkey is hardly comparable to the one in France,” Kaboglu told Al-Monitor. “In France, the state of emergency did not sideline the legislature and the judiciary. It functioned on the axis of the executive-legislative-judicial triad. … Similarly, any comparison between post-emergency rule legislation would be misplaced.”

The anti-terror bill comes atop the sweeping powers that Erdogan assumed this month under Turkey's new system of governance, which is widely seen as one-man rule. Among other powers at Erdogan's disposal, he is now able to issue decrees, including measures pertaining to economic and social rights with far-reaching impact.

Kaboglu had argued last year in a newspaper article that the executive presidency would effectively perpetuate the state of emergency. The process, he wrote, had begun in 2015, with the introduction of a tough internal security law to support a massive crackdown on Kurdish militants in the southeast. In time, however, the law, which extended detentions, expanded the powers of the police, and preventive detentions became the norm across the country.

According to Kaboglu, the declaration of emergency rule after the 2016 failed coup marked the second watershed, setting the scene for the suppression of dissent ahead of the elections for the first executive president. Erdogan’s victory at the polls, he wrote, would mean “one-man permanent emergency rule.”

The anti-terror package is now exacerbating the gloomy prospect Kaboglu described last year. “The amendments are in conflict with the constitutional order,” Kaboglu told Al-Monitor. “This goes even beyond my earlier forecast and is very worrisome.”

Parliamentary debate on the bill began in the Justice Commission July 19. The bill is expected to be voted on and approved in the General Assembly in the coming days.

Turkey’s democratic standards have crumbled so badly that the discussion now is about differences and similarities between various states of emergency. How will the upcoming period differ from the one of emergency rule that just passed? The Council of Ministers and then the parliament once had the power to shape states of emergency, but the new bill also empowers governors and senior public officials in what looms as a “limitless state of emergency” in camouflage.