Turkish police cracked down on protests in Istanbul and Ankara, as demonstrations continued over the controversial appointment of a government-linked rector to head one of Turkey’s top universities. 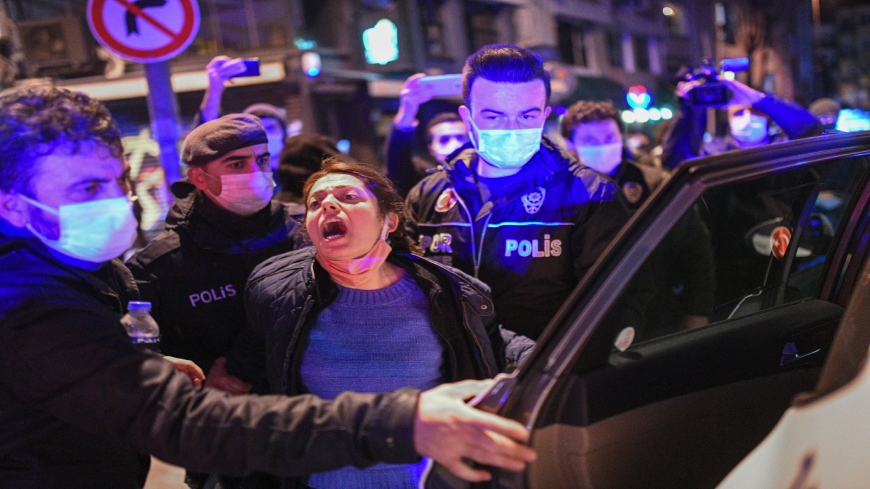 Turkish police officers detain a female protester on Feb. 2, 2021, during a demonstration against the Turkish president's appointment of a party loyalist to head Istanbul's exclusive Bogazici University at the start of the year. Turkey has been hit by weeks of rallies across major campuses and the standoff over the rector gained a new dimension when protesters hung a poster near his office depicting Islam's holiest site covered in LGBT imagery last week. - BULENT KILIC/AFP via Getty Images

The events came after police detained more than 150 protesters at Bogazici University on Feb. 1 following almost a month of demonstrations by students and some faculty members over the controversial appointment of a government-linked rector to head the school.

Nearly 100 of Monday’s detainees were released, but demonstrators gathered once more on Feb. 1 in at least three Turkish cities to denounce what they called disproportionate police force employed to quell protests at Bogazici. Some Turkish citizens in several cities also showed support for demonstrators by clanging pots and pans from their windows at 9 p.m.

Since Jan. 4, students at Bogazici University, one of Turkey’s top educational institutions, have called for the resignation of Melih Bulu, a long-time member of Turkey’s ruling Justice and Development Party (AKP) who was appointed as the school’s rector early last month by Turkish President Recep Tayyip Erdogan.

Opponents of Bulu say his appointment violated university election customs and view the move as a politically motivated attempt to influence the administration at the traditionally liberal university.

Protests intensified on Feb. 1 when security forces dispersed demonstrations at the university after two students were arrested. Two others were placed under house arrest Saturday for displaying a poster deemed insulting to religious values.

The poster depicted the Kaaba in Mecca, among the holiest sites in Islam, with LGBT flags and a mythical creature of Middle Eastern folklore in its place, drawing condemnation from conservative groups and political officials in Turkey.

Heavy police presence on and off the Bogazici campus prompted fresh demonstrations on Feb. 2. Before crowds gathered, the Istanbul governor’s office imposed a one-week ban on protests at the planned demonstration site in Kadikoy.

“The AKP is allowed to hold a party congress with thousands of people, but others are not allowed to gather due to the pandemic, as if COVID-19 only infects their opponents,” Piskin told Al-Monitor. “The government has no authority to ban protests, especially for an extended period of time.”

The rallies have touched a nerve across various sectors of Turkish society. Student protesters’ use of pro-LGBT symbols, such as rainbow flags, have widened initial protests against Bulu’s appointment to include broader discussions on LGBT and minority rights in the country.

In response, several government officials have shared anti-LGBT views while denouncing ongoing protests. Turkey’s Interior Minister Suleyman Soylu twice in recent days referred to the LGBT community as “bastards” or “deviants” in tweets on his account, which have since been flagged by Twitter for violating the platform’s policies on hateful conduct.

In a speech on Feb. 1, Erdogan also praised his AKP’s youth wing for not being LGBT.

"We'll carry our youth to the future, not as LGBT youth, but like the youth from this country's glorious past. You are not the LGBT youth," Erdogan said during an online conference Monday.

In a Feb. 1 tweet, Fahrettin Altun, the Turkish presidency communications director, framed ongoing protests as an attempt by students to “trample our values underfoot” after the university administration blocked an application to establish an LGBT club at Bogazici.

Sinem Adar, an associate at the Center for Applied Turkey Studies in the German Institute for International and Security Affairs and a Bogazici graduate, said the demonstrations have drawn increasing political attention because they conflict with state officials’ current rhetoric in which they outline plans for coming democratic reforms.

“When police were violently hitting protesters [on Monday], Erdogan was giving a speech where he was celebrating the continuous commitment of the AKP government in the last 18 years to democracy and to reforms,” Adar told Al-Monitor.

She added, “I think it’s that gap between the president’s statement and what was happening that is the fragility of Turkey’s ruling alliance. That gap is becoming more and more visible.”

Several opposition party members have criticized the government’s response to the ongoing protests. The main opposition Republican People’s Party chair Kemal Kilicdaroglu on Feb. 1 called on Bulu to resign to “end this ugly situation.” Meanwhile, Oguzhan Aygoren, a member of the oppositional DEVA Party, declined an offer to serve as an adviser to Bulu at Bogazici University.

Adar said opposition party members’ reactions to the Bogazici protests will play a key role in determining the coming course of events in Turkey. Noting many citizens have come under increased pressure from rising food prices and slow economic growth as a result of the coronavirus pandemic, Adar said many are fed up with their current circumstances.

“I think the necessary conditions for mass discontent are there,” Adar told Al-Monitor. “Whether this will bring larger protests, we are not in the position to predict,” but the Bogazici protests could be a “spark," she added.

by Murielle KASPRZAK and Joseph SCHMID | AFP | May 26, 2022
END_OF_DOCUMENT_TOKEN_TO_BE_REPLACED