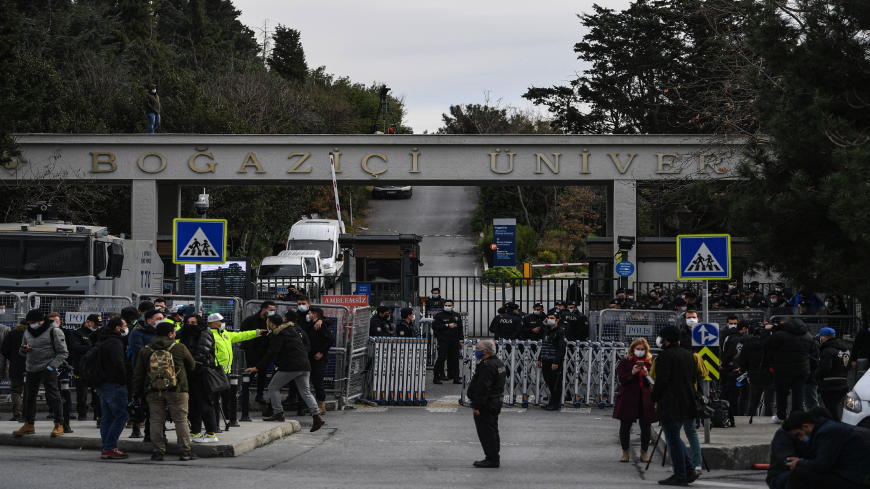 Turkish anti-riot police officers stand guard at the main gate of the Bogazici University on Jan. 6, 2021, in Istanbul during a protest against the direct appointment of the new rector to Bogazici University by the Turkish president. Turkish police detained 17 people after hundreds attended a student-led protest against the appointment by the president of a rector of a top university in Istanbul. - OZAN KOSE/AFP via Getty Images

ISTANBUL — Police barricades and security forces in riot gear lined the streets Feb. 1 near the main entrance of Istanbul’s Bogazici University, where at least one sniper unit monitored the activity below.

The security presence was deployed in response to expected student protests Monday afternoon over the arrests of several Bogazici students this weekend for displaying a poster deemed insulting of religious values.

Planned demonstrations were mostly prevented as dozens of students arriving from other schools in a show of support were detained or turned away by police. The handful of demonstrators that passed the barriers and checkpoints staged a brief protest before police forces swiftly closed in and detained at least three of them.

The scenes were the latest episode in the nearly monthlong protests sparked by the appointment of a government-affiliated rector to head Bogazici University, one of Turkey’s top educational institutions.

On Jan. 4, students backed by some of Bogazici’s faculty began protesting the appointment of Melih Bulu, a long-time member of Turkey’s ruling Justice and Development Party. Bulu's installation side-stepped traditional university election procedures and is seen by critics as a government attempt to gain further influence over Turkish academia.

Monday’s events come after two students were arrested late Saturday and two others were placed under house arrest on charges of inciting hatred and insulting religious values over a poster depicting the Kaaba in Mecca with LGBT flags.

The poster, which was on display at an exhibition of protest-related art at Bogazici University, also showed a Middle Eastern mythical creature in the place of the Kaaba, one of Islam’s holiest sites. Following condemnations by a number of government officials over the image, Turkish Interior Minister Suleyman Soylu announced in a tweet late Saturday that four “LGBT perverts” had been detained for “disrespecting” the Kaaba.

In response, students with the Resist Bogazici platform released a video statement on social media, saying the main goal of the protests was to oppose the “anti-democratic appointments” to the university and not to disrespect public values.

"We acknowledge the sensitivity that is aimed at our exhibition,” the students said in a statement. "We also acknowledge that no art form is closed to criticism. However, to be put on trial because of an art piece is against the basics of free speech.”

Feyzi Ercin, a lawyer representing the Bogazici students and who was on campus during demonstrations Monday, said a group of about 250 demonstrators attempted to leave campus at 5 p.m. to hold a demonstration but were stopped by security forces who were enforcing a ban on the rally, put in place under COVID-19 restrictions.

At about 6 p.m., Ercin said the crowd attempted to enter the rector’s building, where again campus security personnel stopped them. As the night continued, the students staged a sit-in, requesting the rector join them for a discussion on recent events at the university.

“It’s very tense. There are undercover police in the crowd. There is a lot of security here,” Ercin told Al-Monitor. “The students are demanding their arrested friends be released and that the rector should resign.”

Among the protesters present at the Bogazici University entrance was Umut, a Bilgi University student, who said homophobic rhetoric was being used to turn public opinion against ongoing demonstrations.

“This is not about justice or protecting morals. This is about the government manipulating people’s feelings,” Umut told Al-Monitor. “LGBT people and the LGBT movement are [easy targets] for them to gain support for their undemocratic actions.”

Friction between state officials and LGBT rights advocates is not new in Turkey. The annual Istanbul Pride march has been banned since 2015, and political rhetoric toward the LGBT community has become increasingly hostile in recent years. In April 2020, Ali Erbas, head of Turkey’s Presidency of Religious Affairs (Diyanet), said homosexuality brings “illnesses and decay.”

Sannur, a Galatasaray University graduate who was also at the protest outside Bogazici Monday, said she believed the poster depicting Mecca was not offensive and that people were being “very sensitive.”

“They are trying to marginalize us again,” Sannur told Al-Monitor, in reference to government officials.

Sannur added, “It’s getting worse for the LGBT community, but also for all opposition members. LGBT people are just more visible because they are pushing for change. But they are only trying to live, and that makes some people uncomfortable.”

by Murielle KASPRZAK and Joseph SCHMID | AFP | May 26, 2022
END_OF_DOCUMENT_TOKEN_TO_BE_REPLACED