Turkey's president and other officials have used inflammatory anti-gay rhetoric to describe the student-led protests in Istanbul. 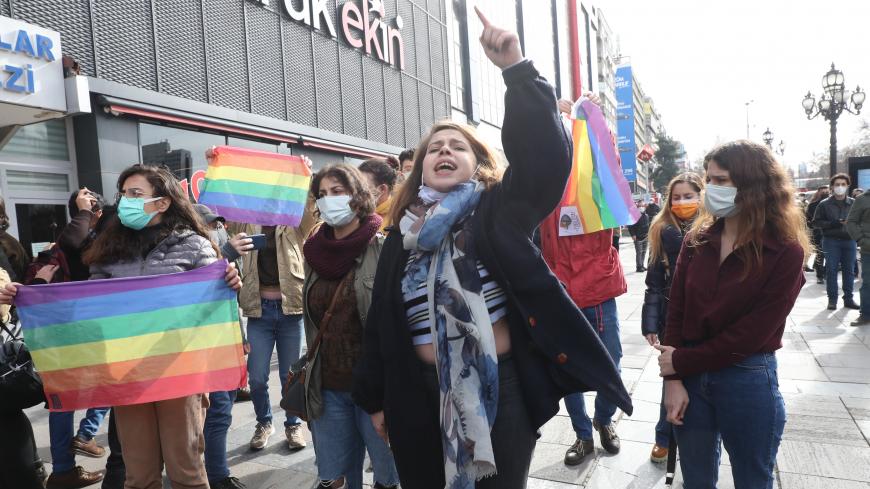 A woman gestures as Turkish police detain activists supporting Bogazici University students protesting the appointment by the Turkish government of a new rector in Ankara on Feb. 2, 2021. - ADEM ALTAN/AFP via Getty Images

The new US administration is concerned by the treatment of student protesters in Turkey and condemns the anti-LGBT rhetoric sparked by the ongoing demonstrations, the State Department said on Wednesday.

Students at Istanbul’s Bogazici University have been protesting since last month, when President Recep Tayyip Erdogan appointed a loyalist with links to his ruling Justice and Development Party to serve as the prestigious university’s rector. The clashes with police escalated last week after protesters hung a poster on the campus that depicted the holy Kaaba building in Mecca with rainbow flags.

Two students were arrested in connection with the LGBT-themed artwork and another two were placed under house arrest. Turkish authorities have arrested more than 300 people for their participation in the rallies.

Earlier this week, Erdogan accused “LGBT youth” of committing acts of vandalism. On Wednesday he likened the student protesters to “terrorists” and said “there is no such thing” as LGBT.

“Freedom of expression, even speech that some may find uncomfortable, is a critical component of a vibrant, functioning democracy that must be protected,” Price said.

Ties between the NATO allies are strained over Turkey’s multi-billion-dollar acquisition of Russia’s S-400 missile defense system, which triggered limited sanctions in December. During his confirmation hearing, Secretary of State Antony Blinken referred to Ankara as a “so-called strategic ally” and said the Biden administration would review whether more sanctions were needed over its S-400 purchase.

Biden and Blinken have spoken with a number of foreign leaders since the inauguration last month but have not held phone calls with their Turkish counterparts.