Hope for a reset in Turkish-American ties under the Biden administration will remain unrealistic until Ankara addresses its democratic issues and human rights record. 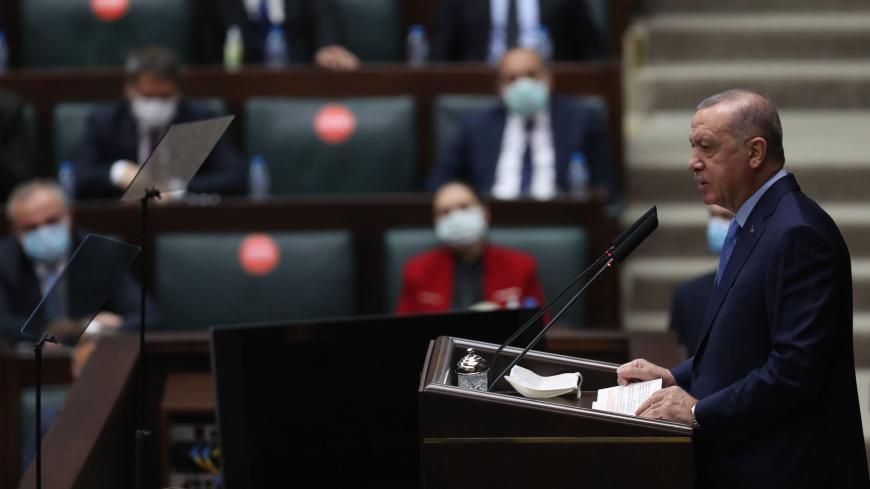 Turkish president and leader of the Justice and Development Party Recep Tayyip Erdogan speaks during his party's group meeting at the Turkish Grand National Assembly in Ankara on Nov. 11, 2020. - ADEM ALTAN/AFP via Getty Images

Already damaged relations between Ankara and Washington have soured further over the Turkish government's handling of widespread protests against Turkey's President Recep Tayyip Erdogan’s pick to head one of the country’s top universities.

After reading her recent Washington Post op-ed, I called my colleague and good friend Asli Aydintasbas to tell her how relieved I was to discover that the Erdogan team has a sense of humor. In her Jan. 28 article, Aydintasbas illustrated how Erdogan’s government is preparing for the era of President Joe Biden, as explained by “several of Erdogan’s top aides and former advisers.”

“We are the only country pushing back against Russian expansionism in Syria and elsewhere,” one Erdogan adviser told Aydintasbas. “The president has developed a rapport with [President Vladimir] Putin and is the only Western leader who can have a frank conversation with him. The Biden administration should see this as an asset.”

It's funny to imagine this adviser might think that this explanation will convince the American administration about Ankara’s real motivations to improve relations with Moscow. Ankara’s chances to impress Washington through such comments seem fairly low and the recent conversation between US national security adviser Jake Sullivan and the Turkish president’s spokesperson offers further evidence of the massive disconnect.

The Turkish side hailed an almost hour-long phone conversation between Sullivan and Ibrahim Kalin on Feb. 2, the first official contact between Turkey and the United States after Biden took the office. The Turkish media trumpeted the call as a prelude to a reset in bilateral ties.

The differing readouts of the call betrayed Ankara’s superficial optimism. For instance, in the Turkish version, there was no reference to the “democratic institutions and the rule of law” that Sullivan “underscored” during the call, according to the American version. Sullivan also expressed “concern” about Turkey’s acquisition of the Russian S-400 surface-to-air missile system, saying that the purchase “undermines [NATO’s] cohesion and effectiveness.”

Despite substantial enthusiasm in some quarters, until the Turkish side accepts that its troubled democracy is a major stumbling block in bilateral relations under the Biden administration, Turkish hopes for a reset will remain futile.

Another op-ed penned by Sinan Ulgen, chairman of the Istanbul-based EDAM think tank and a non-resident scholar at Carnegie Europe, illustrated this naive enthusiasm. In his Jan. 31 Financial Times article, Ulgen advised the Biden team on restoring the alliance between Ankara and Washington by subtly blaming the American side for the differences.

“The only way for the Biden administration to reach a proper reset with Turkey is a grand bargain with [Erdogan],” he wrote.

“Washington imperiled its relations with the Turkish state through its decision to fight against [the Islamic State] in partnership with the Syrian Kurdish Democratic Party.” A sine qua non for a reset is, therefore, “a reappraisal of US support for the Syrian PYD.”

While concurring that the erosion of democracy and rule of law have “further strained Turkey’s ties with the West,” Ulgen didn’t elaborate on how Turkey’s poor record on democracy and human rights have deteriorated Ankara’s ties with its Western allies.

Erdogan’s appointment of Melih Bulu, a longtime member of his ruling party, to head the school sparked protests by students and faculty members in early January. Ongoing demonstrations at the school and solidarity rallies in other major cities have seen more than 300 students and other demonstrators detained by the police. Some students said that they were mistreated and even tortured at the hands of the police during the brutal crackdowns.

Istanbul's Bogazici University has been one of the rare institutions that remained unconquered by Erdogan's drive to control higher education in Turkey. The rallies show increasing resentment against Erdogan's authoritarian rule and trampling on the rule of law amid the country's pandemic-triggered financial strain.

Erdogan has employed his usual defiant tone on the matter, attacking the demonstrators with heated remarks.

"We do not consider those [demonstrators] representatives of the youth in our country that have national and moral values," he said Feb. 5 in a televised speech. "This country will never relive the Gezi events. We will never let it happen again," he added, referring to the 2013 nationwide Gezi protests.

In one of his most virulent statements against the country’s LGBTI community, he said, "This country has national and moral values; there is no such thing as LGBT in our values." His remarks came after a banner at Bogazici University depicting a Muslim holy site, the Kaaba, with a rainbow flag.

Erdogan’s ultranationalist ally and de facto coalition partner Devlet Bahceli went further. In his well-known venomous style, he called the Bogazici University students “poisonous snakes" as well as "vandals and barbarians” that should be stopped by “whatever means necessary.” Twitter has removed his post for hate speech violations.

“They are not the children of this country. Turkey has no children like them,” he tweeted Feb. 3, prompting the social media platform to remove the post.

Reacting to the incidents, the US State Department expressed “concerns” about demonstrations and condemned “anti-LGBT rhetoric” surrounding the events, prompting a strongly worded response from the Turkish Foreign Ministry.

“We recommend those … who intend to lecture Turkey on democracy and law to look at the mirror. No one should exceed their limits and interfere in Turkey’s internal affairs,” the Foreign Ministry said in a Feb. 5 statement.

Turkey’s hard-line Interior Minister Suleyman Soylu has escalated the controversy and accused the United States of involvement in the 2016 coup attempt.

“The United States' involvement in the coup attempt was blatant and clear,” Soylu told the Turkish newspaper Hurriyet. The State Department quickly rejected the claim, saying such accusations were inconsistent with Turkey’s “status as a NATO ally” and strategic US partner.

The quickly worsening bilateral ties between Ankara and Washington only days after Biden took the office can be seen as a wake-up call for those who are optimistic about a reset between the two NATO allies. Turkey's relations with the Barack Obama administration soured following the brutal suppression of 2013 Gezi protests. There is no reason to think it would be radically different under Biden, who served as Obama's vice president, especially with Erdogan in a much more authoritarian position than in 2013.