The violence on Capitol Hill promises to further complicate Turkey-US relations as the incoming US administration’s tolerance of those who show contempt for democracy and rule of law diminishes. 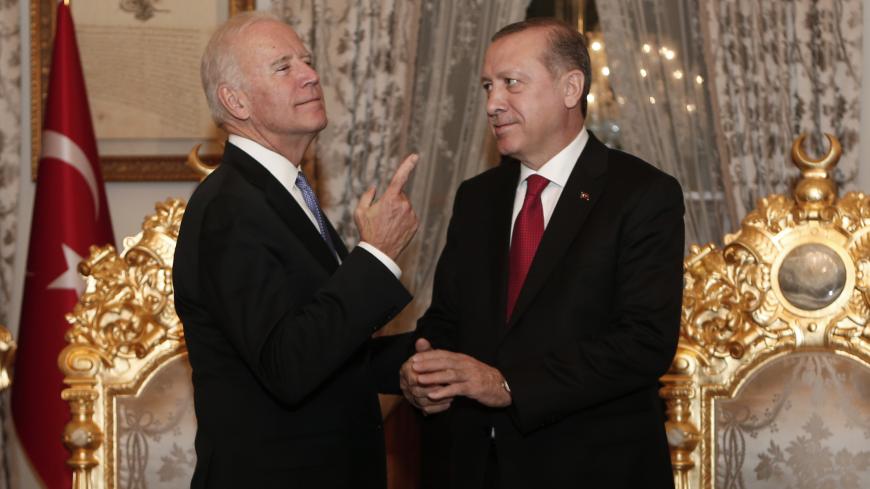 US Vice President Joe Biden (L) gestures next to Turkish President Recep Tayyip Erdogan after a meeting at Yildiz Mabeyn Palace on Jan. 23, 2016, in Istanbul. - SEDAT SUNA/AFP via Getty Images

The unprecedented assault on American democracy Jan. 6 will naturally have global ramifications and its predictable consequences do not bode well for the leaders around the world who have been embraced by outgoing President Donald Trump. Turkey’s President Recep Tayyip Erdogan is one of them.

Turkey's call for “moderation” on both sides as the riots were unfolding on TV came as a shock to many in America. Andrea Mitchell, senior Washington correspondent for NBC, reacted to the statement with outrage. Mitchell said Turkey’s statement was ironic, coming from a country with such a poor record on human rights and freedom of press.

Mitchell said the reaction was "beyond shocking" while quoting a tweet by Turkey’s parliament speaker, who had called for tolerance and moderation to prevail in Washington. Alleging that Turkey is a country run by a "dictator,” Mitchell recalled how closely Erdogan and other authoritarian leaders across the world were embraced by Trump.

The Turkish reactions came while Turkish police were brutally dispersing a peaceful demonstration in Turkey’s Bogazici University, where students were protesting Erdogan’s appointment of a member of his ruling party to head the prestigious institution. The police handcuffed the gate to the campus to prevent students from assembling on the university grounds. Pictures of the handcuffed gate have become a metaphor for repression and autocratic rule in Turkey.

As such, when the Turkish Foreign Ministry's statement calling for moderation and restraint in Washington came in, Erdogan’s Turkey was busy imprisoning more dissident voices, adding to the already long list of people jailed for their opposition to the government.

Meanwhile, in Washington, President-elect Joe Biden accused Trump of having "contempt" for the rule of law and called those who took part in the assault on democracy "domestic terrorists."

The day after the riots, Robin Niblett of the British Chatham House challenged Biden’s description. "Those who assaulted the US Capitol may be fantasists, thugs, criminals. But they are not 'terrorists.' Reserve that for those who kill civilians for political purposes,” he tweeted Jan 7. “Otherwise, we legitimize Xi Jinping, Erdogan et al. using this term to justify repressing their opponents."

Trump will leave the office in disgrace on Jan. 20 and Biden will assume the presidency. But the Jan 6. riots will impact how he will set his country’s foreign policies as he works to repair the damage inflicted on American democracy, credibility and global standing.

Under such circumstances, Biden will likely have no patience for bullies around the globe, particularly those who were embraced by Trump. Erdogan falls in this category. Biden will also probably remember the damning words that came from Turkish officials after the then-presidential candidate labelled Erdogan an autocrat a year ago.

“The analysis of Turkey by [Biden] is based on pure ignorance, arrogance and hypocrisy. The days of ordering Turkey around are over. But if you still think you can try, you can be our guest. You will pay the price,” Ibrahim Kalin said Aug. 25, less than half a year ago.

More recently, Kalin has expressed a more optimistic view of Turkish-US relations under Biden, saying in a Jan. 10 interview, "Our contacts with the transition team so far are very positive."

Nowadays, both Ankara and Washington have no shortage of advocates for trying to mend the ties between the two countries. Those in favor of a reset usually base their argument on Turkey’s much-vaunted strategic value and the need to prevent Turkey from drifting further from the West toward Russia.

For instance, Nathalie Tocci, director of the Italian Institute of International Affairs and an adviser to EU foreign policy chief Josep Borrell, has become one of the most prominent advocates of appeasement. "The purpose of our actions should be to peel Ankara away from Moscow, rather than push it deeper in its embrace," she wrote in a Dec. 14 article for Foreign Policy.

Erdogan also seems to be seeking a reset, as Ankara's recent attempts to mend ties with Western countries and their regional allies show.

In a compelling and controversial Dec. 29 Forbes article, however, Turkish-American contributor Melik Kaylan questioned the merits of appeasing Erdogan and raised some legitimate questions: "Does Turkey have much geo-strategic value anymore, and if so, what and how much? One could argue … that the West needs to repair the alliance in order to keep Moscow and Ankara apart. But then you'd have to itemize the concrete benefits of doing so. … Why not just make life difficult for Erdogan and indeed for Putin and other leaders of such regimes?”

Now the incoming Biden administration will have Jake Sullivan as national security adviser and Brett McGurk as Middle East coordinator in the National Security Council. Both have reputations for a grasp of realpolitik. They both have engaged with many Turkish officials in the past. McGurk's name is particularly alarming to the Turkish side because of his outspoken criticism of Turkey's policy in Syria and his support for Syrian Kurdish groups that Turkey considers terrorist organizations.

With such officials decorating the Biden administration, a reset in bilateral relations could prove to be even more difficult in the wake of Jan. 6, as Biden and his team will be advised against appeasing Erdogan.

There is still a chance for a new beginning in Turkish-US relations under Biden, but only if Turkey restores democracy and the rule of law by respecting human rights and releasing the thousands of jailed intellectuals, journalists, human rights defenders and Kurdish politicians that fill its prisons.

The prospect does not seem realistic for the foreseeable future under the Erdogan regime.